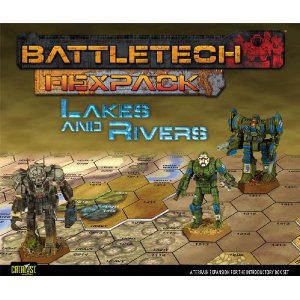 Hey, y’all, Voices here again with another BattleTech review. I’ve got Hexpack: Lakes and Rivers for ya to look at.

Since its release, BattleTech has used pre-genned maps for play. Certain releases (I’m looking at you, CityTech!) had counters to represent discrete terrain that could be place; but with the release of this pack , Catalyst decided that the time was right to start producing placed-hex terrain tiles for any sort of terrain. I know you might have read my earlier review of Hexpack: Cities and Roads, where I referenced this one. Well, this is the one that started it all. Lakes and Rivers is packaged in a card-sleeve-contained sturdy plastic bin that, while not sufficient for extensive wear and tear, is quite acceptable for normal, everyday use and storage. Even I, with my bad habit of maltreatment of materials, have had zero problem keeping my own copy of both map packs in good order.

Inside, like the other hex pack, are three different categories of item. The first is a slim book approximately twice the face size of the old (and I mean OLD!) BattleTech Camo Specs book, with twenty or so pages. It explains the use of the items in the hexpack, has several pre-genned scenarios, and a small rules annex reiterating the rules for water terrain from Total Warfare and the BattleTech 25th Anniversary Introductory Boxed Set. The second item is the increasingly-common heavy folding cardstock double-sided map; and, while this map (with the old Mountain Lake map on one side and the Large Lakes map on the other) has the same issues of the maps in the 25th Anni set and Cities and Roads hexpack, the solution for that is the same: it’ll sit just fine if you take it out and set it on the coffee table for a night or two under some books. Like Cities and Roads, the real gem and highlight of this set is the third item: the heavy cardstock punchable hex sheets. The four sheets have a variety of terrain, but focus primarily on water terrain. There are several ponds and small lakes of varying diameter (five-hexes and three-hexes), several wide-turn pieces, several straight pieces of extended length, and lots and lots of single-hex pieces. Like Cities and Roads, the set has a few forest copse hexes and a single building, all with reversed sides showing rubble or rough terrain. All in all, it’s very good and a product I highly recommend for any serious BT player. Well, that’s it for this piece. I hope y’all have enjoyed both my words and the images for your fun and amusement. With nothing further on this, this is All Voices Anonymous, signing off.
Subscribe to our newsletter!
Get Tabletop, RPG & Pop Culture news delivered directly to your inbox.
By subscribing you agree to our Terms of Use and Privacy Policy. 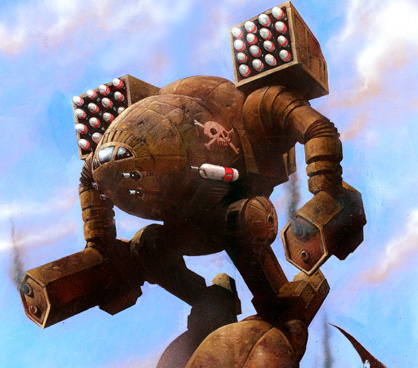