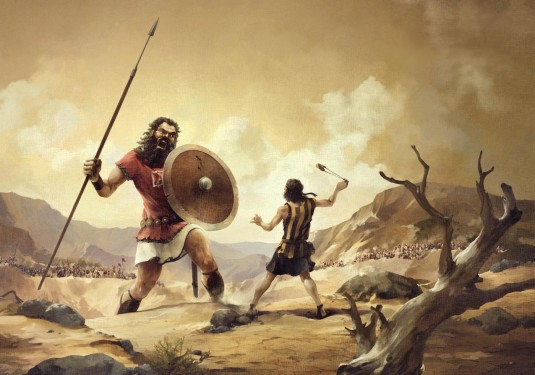 This is not a Biblical tale. This is about why I root for the underdog.

Many times the underdog is stronger and better prepared to win the fight. Often the media tells us who is the best but so often they are wrong… And they are so mad when you call them on it. Who would have thought the NY Giants would win the Super Bowl this year? They had the toughest schedule during the regular season and played two teams from the regular season in the playoffs. I knew they could win and so did a lot of fans.

It is very important to keep our minds uncluttered for competitive players. If you must rely upon net lists to consistently win you may have some problems when you come up versus an unconventional army that is well designed. The Internet can only take you so far… The last 20 percent you must do yourself.

So it seems everyone thought Goliath would p0wn David but the exact opposite happened. Of course David must have felt fairly confident going into the battle. It was an upset victory and changed the course of history. David went onto to become a King and lead a nation. Was it fair he used a sling? Rules lawyers have fun with that one. David knew what was needed to win and made it happen. It is just that simple. So the next time you decide to break out that spammed cookie cutter Internet list maybe you can stop and say to yourself “What would David do to win?” In my opinion unconventional thinking is the most powerful as it opens new doors of perception. The same old same old can be such a yawn fest really. There are many factors that influence the outcome of a battle and some things are beyond our control… For example you can’t ever beat the dice. Preparation is one thing we can use to be successful and I’ve heard many coaches tell me that preparation is 90 percent of winning – I think that is very true.

If we simply go by the so called success of others I think we are selling ourselves short. I love to explore new things and test them. Testing and preparation are two things that can go hand in hand. What is unexpected gives us an edge. To be able to take advantage is key if you buy into this type of philosophy. We can only take advantage if we are fully prepared… Like I said these go hand in hand. I could and have provided in depth analysis how certain units perform best but this can only take us so far. I’ve had people tell me about the 80/20 theorem… They say take care of the first 80 percent and the last 20 percent will take care of itself—I have experienced this type of thinking often leads to epic failure. You must be willing to go all the way to consistently be successful. It is what it is.

~What do you do to embody the philoshphy of winning as the underdog? What is your bit of nontraditional tabletop magic?