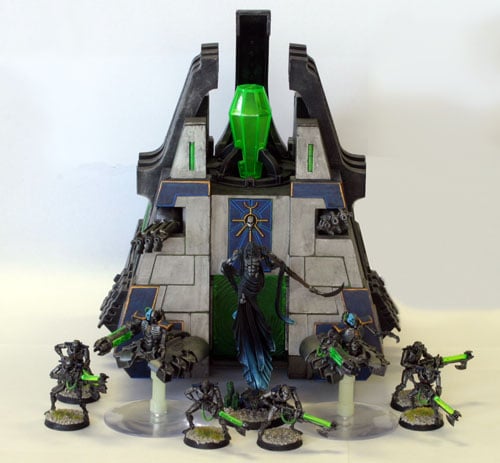 Lets take a look at what the Necrons can throw up in hand to hand combat.  Lets hit it!

It’s funny but after having played Necrons for a few weeks now I find Necrons to be better at melee than shooting. Here are my own personal picks for the top Necron melee units (in no particular order): You’ll note I didn’t include Lychguard – sure they can be awesome but on the other hand they are not fearless and can break then are easily swept being only I2 like almost every other unit in the codex. They are really expensive for the points and are slow. I’d like to be able to make them work for my army but I just don’t see it happening. I have used Lychguard several times – sometimes they did very well but sometimes they had no real impact at all. To make them mobile you’ve either got to attach a Veiltek or invest in a Night Scythe… Both will cost you more points. I really don’t like the Night Scythe – mostly due to the fact that if it’s wrecked or destroyed the embarked unit goes right back into reserve which is the worst thing that could happen to a dedicated melee unit. The Night Scythe is also fragile in my opinion and I don’t think we will see a lot of competitive armies using them to ferry Lychguard across the table. I think the Cryptek could be better utilized in the army elsewhere providing Night Fight for a turn or letting you reroll a dice each turn. If they were fearless it would be a totally different story. Oh well it is what it is.

I also did not include the C’tan… Again another awesome unit but again too slow and too easy to target. They are very expensive for the points. I have used one once and the C’tan kicked arse in close combat but it was versus an army with not much long ranged shooting so I could slog it relatively safely across the table. Versus any army with dedicated long range firepower that could be a major problem. A couple turns of Night Fight might help though.

So I’m not necessarily saying Lychguard or C’tan are bad choices but neither works for me the way I want to play my Necrons. If they work well for you then more power to you. Let me know why they work for you.

Three of the units I’ve listed as good choices above are fast and they are all fearless as well. If you want to play a Necron melee oriented army I believe these are our best choices. Scarabs are great versus ANY armor and can quickly tarpit a lot of enemy units all the while applying the NOM NOM. The trick is quickly building them up to a high number of bases and releasing them at the right moment. Based upon my experience a horde of 24 Scarabs is more than twice as good as 15. I run a unit of 9 bases with two squads of three Canoptek Spyders… Let’s do the math as it’s quite simple:

Turn 3 is the right moment to send them forward if you can wait that long to let your farm reach critical mass. Remember that you can start moving them forward during the first three turns – simply keep the tail end within the minimum distance from your Spyders so you can keep crapping out more of the little metallic beasts and they are easy to hide for the cover saves.

So far I have found 24 bases to be the right number. If you are investing less points they won’t be nearly as effective… There are some armies that really don’t have a good answer to Scarabs and I think they will be the demise of Imperial Guard.

Canoptek Spyders are really cheap for the points – only 50 points for a S6 T6 3W monstrous creature with an excellent armor save… It doesn’t get any better than that in my opinion. I have found in melee they tend to be more of a tarpit versus tough enemy dedicated melee units such as Thunderwolves or assault terminators. Always remember that their main purpose is to crap out more Scarabs. Versus softer enemy units they will chew their way right through them. Don’t forget to run the Spyders so you can extend your line of Scarabs. Spyders can also be used to provide cover to other units.

So now we come to Canoptek Wraiths. As much as I love Scarabs and Spyders this is probably my favorite unit in the new codex. I think they are much more potent now in the new codex. Wraiths have many advantages in melee over other enemy units – it’s hard to cover them all so for the time being I’ll simply say they are made of pure gold and soon cover them in more depth in a follow up article.

The last Necron melee unit is the Destroyer Lord which I’ve already covered in another recent article. Sure the Destroyer Lord does not have access to a Royal Court but if you’re goal is to design a competitive Necron melee army you can easily get around this particular short coming. I run mine with the weave (2+ armor save), Res Orb, Mind Shackle ScArabs and a Tachyon Arrow. He is expensive but he is also another true beast designed as such.

Conclusion
I have presented the Necron units I think are the best in melee and my 101 tips on how to best utilize them.

How are these units working for you? Do you think Necrons are better in melee now?