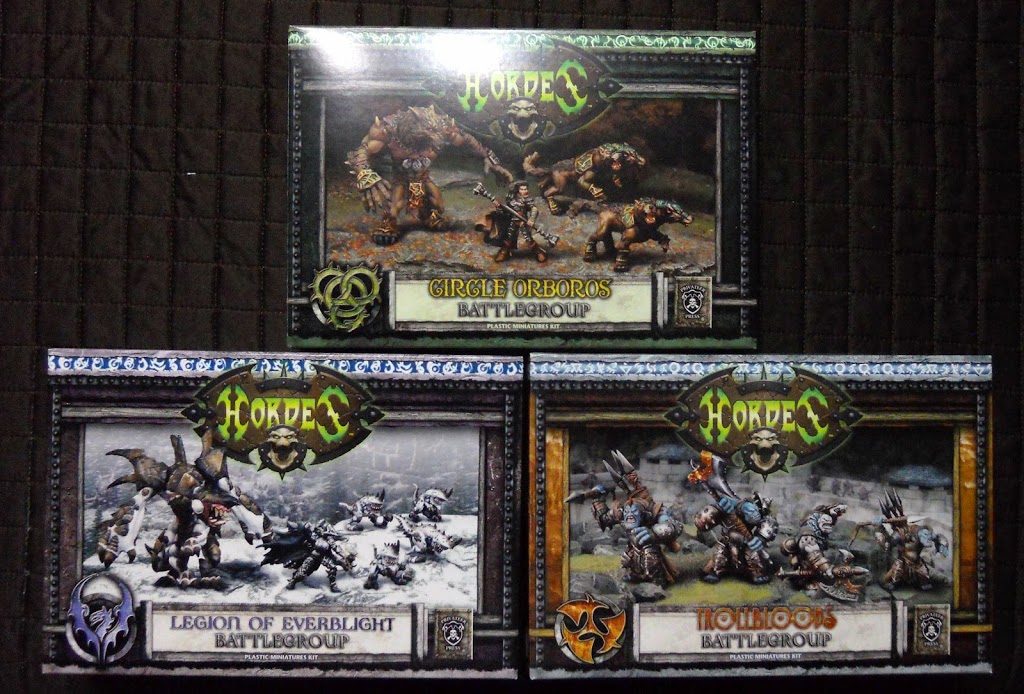 It’s an exciting time for Hordes.  Three of the four main Hordes factions are getting new plastic Battlegroup starter kits early this May.   Skorne players will have to wait until the end of May to get theirs, but as soon as I can get my hands on one you can expect to see some pics of it too.  Lets take a look at what I do have.
At $49.99 these kits represent a relatively affordable way for new players to get into Hordes or for older players to bolster their forces.  In fact if you went to Adepticon you should have gone home with one of these kits in your goodie bag for free.  For the rest of us, here are some shots of what comes in these new kits. Might as well do it alphabetically and start with Circle. In addition to models and cards it also comes with quickstart rules and a mini No Quarter, the bi-monthly Privateer Press hobby magazine.  You can check out some more pictures of the latter in last September’s two player starter unboxing article. The contents of this set include a Feral Warpwolf, 2 Argi, and the Circle Warlock Kaya the Wildborn. Since the plastic Warpwolf was already shown off in another article, I won’t bother to repeat any of that content.  I will however point out that this battlebox will only allow for the construction of the Feral variety of Warpwolf.  So… moving on, shown above are the non-warpwolf contents of the Circle starter box. Here’s a close up of the Argus body.  They both come with all four legs attached. And here’s the Argus face. With those deep pegs on both heads, you can practically assemble the whole beast without glue. We’ll finish the Circle section with this plastic Kaya sculpt. She’s loaded with detail. Like all the Warlocks in these sets, she’s a plastic version of her “alternate” sculpt from last year. Now let’s check out the legion box.  Of course it also came with quickstart rules and a mini No Quarter but you’ve already seen that.  Just like you’ve (hopefully) already seen this unboxing article for the plastic Legion Heavy Kit.  Like the Circle box, the Legion starter only contains enough parts to make one heavy beast option: the Carnivean.  Let’s have a look at the cool new stuff in the box. And in this case, the cool new stuff is Lylyth, Herald of Everblight and four Shredders. Lylyth seems to have every bit as much detail as Kaya. So much that I can’t limit myself to just the one picture. I also have to show you close-ups of her bow… And just like the Argus from the previous kit, you can almost put her together without glue. And of course I also have to show a close-up of one of the Shredders.  Check out those pearly whites. Trollbloods are last on the list, but by no means least.  They’ve always been my favorite Hordes faction.  They’re also the only new plastic kit with all new stuff. While the box only shows two variants, the kit actually comes with three heads.  These new guys definitely have a different feel to them than the old heads from the previous set.  They feel somehow more brutal and less savage – if that makes any sense.  Whatever the case, they’re definitely cool.  They’ll add a lot of character to my existing forces.  In fact I think one of them is going on a bouncer I’ve had sitting around unassembled for ages. Not everything in the kit has been completely resculpted.  Some things, like the two hands here are unchanged.  The spear caddy (yup that’s what I’m calling it) is almost identical, but with some extra details thrown on in the form of new straps and buckles and some added/rearranged stitching. And once again, thanks to the cool system of pegs you see in all these kits, the beasts can almost be held together without glue. I can’t think of a better way to end a Hordes article than with a shot of Madrak, my first Warlock.  And his plastic incarnation is every bit as cool and detailed as the metal version I picked up when Hordes first came out back in 2006.
~ So there you have it, new Hordes plastic kits.  What does everybody think based off the pictures here?  And for you lucky ones out there who got your own at Adepticon… what are your thoughts?