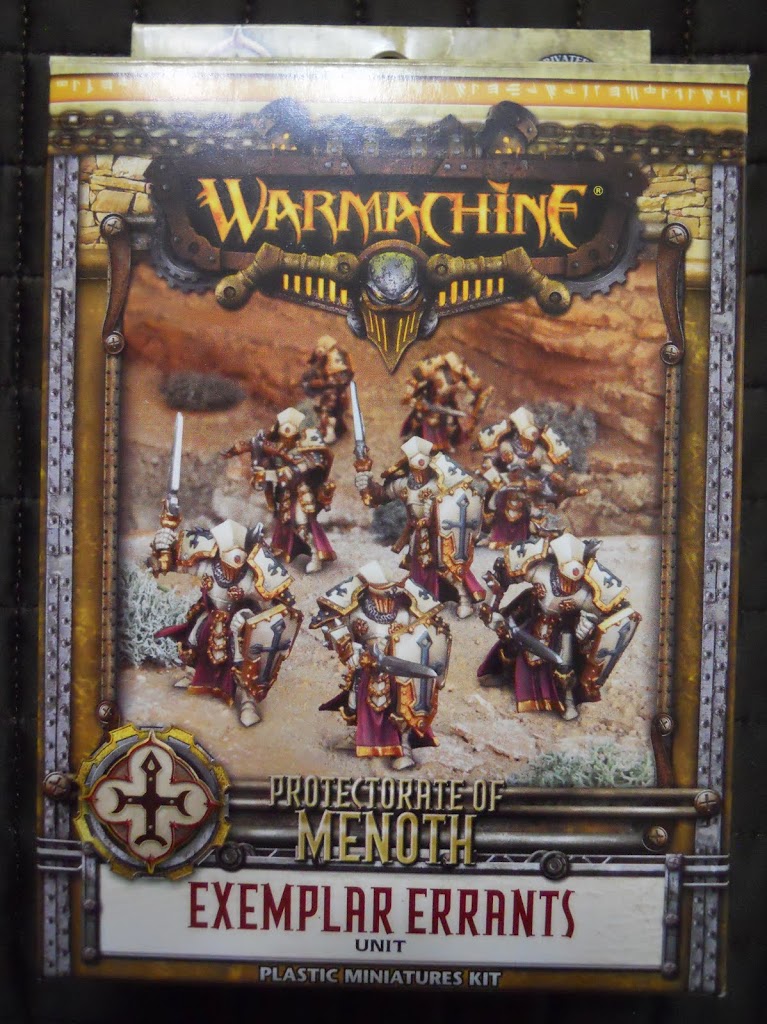 Privateer Press’ first unit of plastic small based infantry releases this April. This is an important step for a company that is slowly trying to transition more and more of its range away from metal.

I’m sure this one will be of particular interest to fans of Privateer Press and plastic miniatures in general. For anyone who might plan on buying a unit of Exemplar Errants, at $50 this new kit will save you $18 off of MSRP. It’s always great to see new releases bring prices down rather than up. Inside its pretty much the same story as the rest of Privateer’s plastic kits: lots of pieces all bagged up. Here are the 10 Errant bodies. 3 of them will need to have their tabards glued on. Including the leader there are 4 different body types. A close up look at the detail shows that all the rivets and tiny ridges are well defined. They’ve also added a line along the base of the tabard to give them a little more visual interest. The menofix on the leader’s helmet almost looks more pronounced and defined than on the original metal sculpts. The box is loaded with pieces. Nothing was missing. In fact it looks like I managed to score an extra shoulderpad, and two extra shields. There were also a total of twelve sets of arms, with corresponding sword-in/ sword-out scabbards. Assuming this is standard you can assemble most of your Errants to be wielding sword and shield. There’s plenty of detail on the shield. The rivets and the lip around the gem are all defined nicely. There’s a bit of sprue flash that will need to be cleaned, but at least its not anywhere prominent. It’s pretty much the same story with the shoulderpads. I remember a few of my old metal shoulderpads sometimes having mold lines running down the rivets. It’s nice to see that on these new ones, the line runs around the edge where its easy to clean off. The sword hilts look as ornate as the metal versions. Also note the cavity at the shoulder. A peg on the torso fits in there for easy assembly. There is a similar cavity in the palm of the crossbow hand. Everything should go together nice and snug. Here is one of the crossbows. Even the scabards, which I suspect many will just throw away, have lots of great detail on them. As most of you probably already knew, the Knights Exemplar kit contains the same bodies and shoulderpads as the Exemplar Errant kit. At $35 this kit will net you a $5 savings over the old metal one. Since you’ve already seen most of the contents, I’ll just show the pieces that make the kit different. The new swords are both longer and thinner. They finally look suitably more intimidating than the Errant’s blades and thin enough that no one should have trouble identifying them as swords. If you look closely you’ll notice a plug protruding from the back of the hand. This will slide into the other arm, again making for easy assembly. And I’ll leave you with the Knights Exemplar Leader’s pointing hand.

~Overall I’d say this is a pretty great looking kit. While the detail is not quite as crisp as the original metal, this is always going to be true of plastic. I think they’re going to look great assembled and painted up.