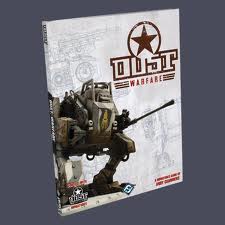 So will Dust Warfare be the game?  The game so many of our brothers, sisters, and Unicorns out there want to rise out of the morass of new systems to finally challenge the mighty Games Workshop, struggling for a few years before toppling the Citadel Tower?

Nope.  But that’s the wrong way to look at it – and besides, who’d want all that anyway?

For crying out loud, why the GW hate of late?  Sure, it’s a transition period.  Maybe 8th Edition Fantasy wasn’t so balanced.  Maybe there’s some anxiety about 6th Edition 40K.  Just don’t forget that it’s the giant of the industry that’s made the industry possible.

Mmm… maybe we don’t say it enough?  I’ll start:  “Hi, my name is Brent and I’m a wargaming junkie.  The new GW plastics make me twitch, but my personal constant-craving is for 80’s and 90’s ‘classic’ metals.  I love GW.

But if I just have to cheat, I mean, if someone is making me, then Dust Warfare looks pretty freakin’ cool!

Personally, I’m not looking for a ‘primary game’ to replace 40K, but a solid secondary – preferably skirmish  – would fit the bill quite nicely.  In the local area, we had that for awhile with Confrontation… before Rackham doubled down on its pre-painted plastics by completely destroying the range that attracted the players to begin with. The locals have floated some trial balloons here and there; Warmachine / Hordes being the only one to gain any real traction.  That said, the balance issues, mismatches, and limited scenario – and note that’s in the singular, ’cause the only real scenario is the ever popular ‘caster kill.’  I like this game, but a good secondary game should play faster than 40K.

Gotta say, giving the book a read through was pleasant, especially when it caters to both a narrative and competitive driven approach!  And I quote (page 64):

The Battle Builder is a cunning little matrix for choosing a scenario.  Each player has two Scenario Points, which they will alternate placing on a grid of three columns and up to three points.  The three columns represent Objectives, Deployment, and Conditions – all of which will factor into the game.

Meaning each point spent will impact the game in some fashion.  The strategy is to minimize those factors that adversely affect your army while trying to mess over your opponent’s some!

(Does anyone remember the old Sci Fi classic from Piers Anthony called Split Infinity?  It reminds me of the Game Control, and that’s really appealing from where I sit!) While simple enough, it’s not hard to see how this can pay off in a number of ways.  For example, if you build an Axis force that can’t cover ground quickly, you can develop a Battle Builder strategy to play for Force Collision or Close Engagement.

Naturally, you can play off of your opponent’s choice; this is an alternating system, after all.  Let’s say your opponent plays first, putting a point in Deployment…

…he’s played into your game.  Put another in the same spot, guaranteeing Force Collision and threatening Close Engagement – which benefits you.

Your opponent has to think.  He can’t play into Deployment again; that gives you what you want, so you’ll be free to spend your last point where it benefits you the most.  He finally places in Conditions, since currently Break the Line favors his faster-moving elements.

Now all that’s left is deciding what works best, the counter in Objectives, playing into Eliminate the Enemy (or more accurately, out of Break the Line) or the more aggressive play into Deployment, taking the game into Close Engagement.

Which you wanted anyway.

Obviously this article is an intro into a new, and in my mind exciting, mechanic.  Suffice it to say, the scenarios themselves are more challenging than I’ve alluded to, meaning there are a number of game types to learn before you test yourself in the tournament setting.

But that’s part of the fun, isn’t it?

The floor is yours!  Comment on anything and everything related to Dust Warfare…

…anyone else jazzed to see Chamber’s name on the cover?  What do you think about the mechanic, Battle Builder?  Played the game yet?  How about those miniatures?

There will be more to come, but until then: