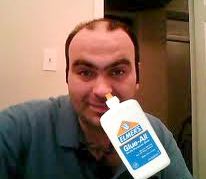 This article is about Citadel’s Plastic Glue, but on the off chance the title’s joke wasn’t completely, obviously, not even a little bit serious…
…let’s add a quick warning.
Don’t sniff glue!
Don’t huff or sniff or snort glue or gas or chemicals – don’t be that dumb.  Assuming you’ve ever even considered it, you may not have enough brain mass in the old Frontal Cortex to risk losing.
And lose it you will.  There’s nothing quite so difficult as explaining to mom and dad that little Bobby or Joey or Smitty or Linda Sue will never, ever get back what was lost… but will in fact just get worse and stay there.
* * *
But enough of that!  So, before getting sidetracked with warning today’s youth off one of the more monumentally dumb ways to slowly kill yourself, what’s this all about?
Plastic glue!  The following blurb hit my own personal blog, Strictly Average, last week…
* * *
I’ve long been a user of the ‘super glue plus accelerator’ combo, avoiding plastic glue like it was the plague. A local buddy is a big believer in the right tool for the right job… …and swore by plastic glue.  I did what I usually do with his advice – ignored him for years before accidentally seeing an example.  In this case, watching him put together a Guard army in record time.
It’s a pretty unbelievable difference!  After a few moments of pressure, the glue is tacky enough to hold the models together until the seal is complete.  He was flying through guard models!
So, darn it all, yet again the dude has a point.  And yet again I’m years behind the curve.  I picked up some of the new Citadel glue – pictured above – and tried it out on the models from Adepticon I was putting together.
Damn.
All those years of wasted effort!  I have simply never put vehicles together so fast or so well.  The glue doesn’t set immediately but will keep a hold, meaning you don’t have to worry about it drying too fast and out of place.  You have some time to manipulate the parts where you need them.
If you’re still using super glue, save it for metal and resin.  Buy this stuff for your plastics and don’t look back!
* * *
But that’ wasn’t the end of it.  Turns out, this topic is loaded with opinion!  Here are some comments I nicked for the article tonight:

Anon Said:  Super glue Gel (lock tight, blue cap) is better. you have all the advantages of super glue (easy to find, easy to re-break, fast dry) and all the advantages of plastic glue (can be manipulated if not pressed together immediately, no need for accelerator). Then it has its own advantage – it is a gel and is really hard to make a mess with. When you do, it wipes up better without sticking your finger or papertowel to the model – though I have been known to glue myself cause I have fat fingers. But I like it best cause it doesn’t fuse and so you can re-break later if needed. I;ve tried plastic glue and I hate runny glue and I have to hold it together longer than the super glue gel.

Goatboy Said:  It really depends on if you want to break your models later to reuse parts etc. Both work well – I just don’t like the tear effect Plastic Glue will have – but really for any tank you are not going to break that apart.

Artemi Said:  I swear by Loctite brand super glue gel. I’ve never once had a problem with it holding what I need it to, and it works equally well with metal, plastic, and the dreaded metal/plastic combination model. It’s also cheap and readily available in most areas, so I find it pretty much perfect for any job I’d need it for.

Von Said:  I hate superglue. Works on fingers, and it’s brittle as hell when it dries. That’s fine for something you want to take apart but the flipside is that something like my kitbashed Skeletons fall apart when you sneeze on them if they’ve been done with superglue. I can’t be doing with endlessly repairing fiddly conversions at my time of life. Plastic glue pour le victoire, frankly.

Adam (The Dice Abide) Said:  I’ve been using this stuff for years: I’m fairly certain that’s where GW got the idea to use the thin metal tube for application. Anyhow, You made the right decision, but don’t dismiss superglue + accelerator, even for plastics, sometimes pieces need to be held tightly together to create a perfect fit, and if you’re not using clamps (everyone should own some rubber tipped aligator clamps), then the superglue is still going to be very useful.

But the Mistress of Minis had the last, best word… …it was probably the safe word, come to think of it.

The Mistress Said:  The general negativity towards plastic glue comes from people that do not use it properly. It should NOT be the glue for beginning modelers- as if you poorly assemble something its stuck that way forever.

In trade circles like bartertown(and ebay), I won’t even trade for stuff assembled with plastic glue unless their are clear hi-res pics to see the actual assembly. Its too easy to get stuff thats basically useless and cannot even be disassembled for bitz. So, the bargain ‘rescue’ models that used to be cheap and an easy fix because of superglue- are now a serious gamble.

Another downside of plastic glue on GW minis- any time theres a new edition or codex rolled out- updating your stuff to fit the new rules (as something inevitably becomes obsolete) becomes a challenge.

And finally- one reason people have so many problems using superglue- they have no clue there are different types and expect all the types to do the same thing. Gels stay put but dry slower, the thinner stuff dries super fast- but inept application usually has it running all over the place. Accelerator sprays might help with gels drying faster- but they also make the bond weaker. But the biggest problem is that ‘super glue’ is strongest in very thin sections where the pieces are closely fit together- with miniatures this means clean joins and proper model preparation. Alot of gamers these days don’t take the time to fit the pieces together very well- they expect the glue to do all the work for them.

Turns out there’s a lot to be said on glue… did we just about cover it, or is more needed here?

Where are your thoughts?  Comments?  Hugs and gropings?