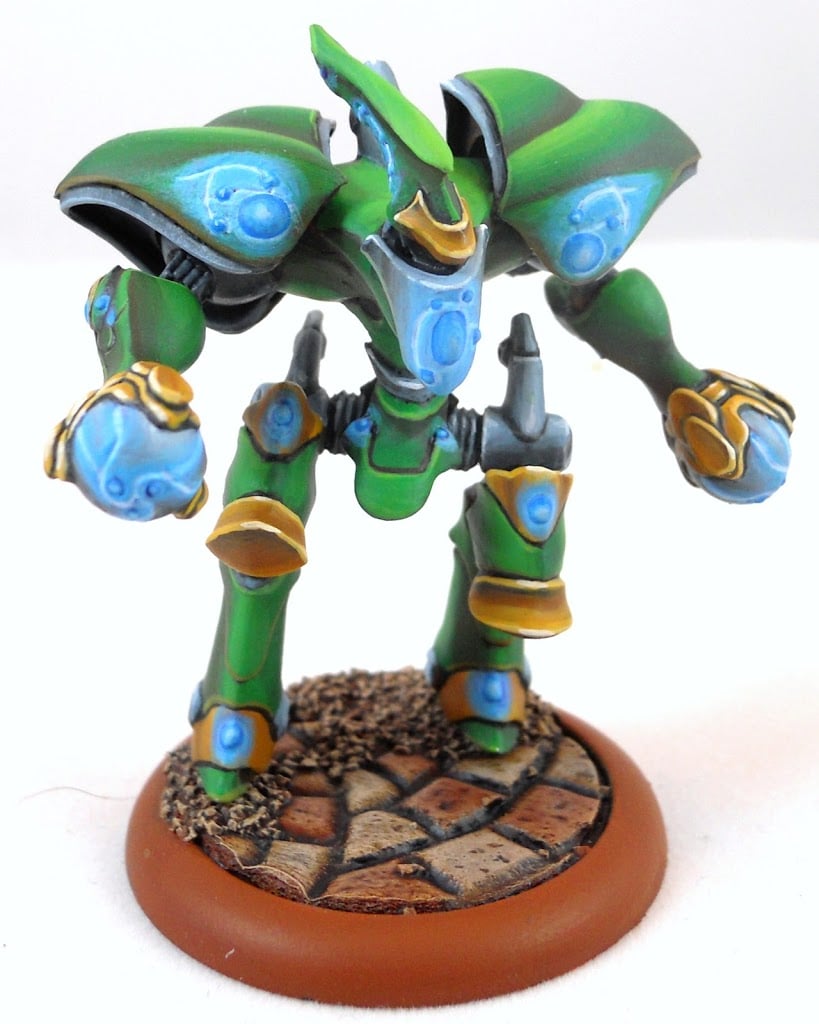 While I don’t have any plans to start a Retribution army any time soon, I did paint an Aspis recently as part of a miniature exchange.

Just because I never planned to play this faction doesn’t mean I hadn’t formed any thoughts about what a cool Retribution color scheme might be.  There has always been something about the Dawnguard and the Myrmidons that made me think of monstrous beetles.  So for this paint job I thought I would try out a scarab inspired iridescent green color scheme. I started with a basecoat color that would contrast nicely with the green.  In this case, GW’s old foundation color Calthan Brown.  I’m not sure what the new corollary for it is, but be prepared for a lot of old color names since I’m still working my way through them. I wash the basecoat with Devlan Mud to help define the areas.  Once the wash is dry I start working up the highlights with GW’s Snot Green. I add some Bestial Brown to the Green to help define the shadows.  Scorpion Green is added to the Snot Green and built up in successive layers to create the highlights.

Mostly satisfied with the carapace, I move on to the metallic areas.  I’m going to give some NMM techniques a try on this one. I’m using the same colors here that I did on Navarre Hauser.  Check out that article for some more in-depth thoughts on NMM. After basecoating the metallic areas with a bluish midtone, I wash them with some thinned down Badab Black to define the shapes. Next I go back in and touch up the metal areas with the same mid tone color. Then I add the shadows and Highlights. Once I feel satisfied with the metallic areas, I move on to the gold areas and the glows.  I start off the glowing areas by painting them with pure P3 Morrow White. The golds are all mixed from P3 colors.  Again – check out my Navarre painting article for more info on painting NMM. In addition to shading and highlighting the golds, I also get started on the glows. It doesn’t take long before I decide that my initial choice of red is going to contrast too sharply to make a good accent. I decide to switch to Purple.  It also contrasts, but not as sharply.  I continue with the golds while trying to make these purple glows work. Despite spending quite a bit of time on the purple work, I’m still not happy with the way they turned out.  I think the problem is the lavender tone I ended up with by trying to avoid going with too red of a purple.  There’s only one thing for it.

~ So after three initial failed glow attempts, it looks like blue was the way to go.  I didn’t think it had enough contrast initially but in the end it was the best choice.  And now its time to ship this Aspis off to Australia.  Hopefully its new owner likes green.