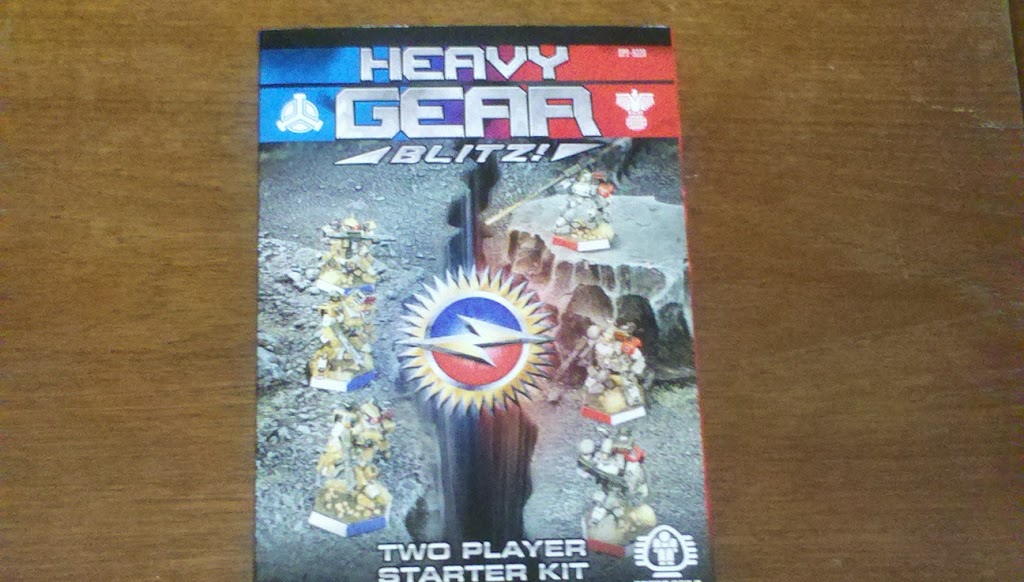 Specifically, Heavy Gear Blitz that has returned the old Heavy Gear game to tabletops. This two-player starter box is a great introduction to Heavy Gear Blitz and the world of Heavy Gear in general, and we’ll start there before moving on. This is the first article in a series of articles on Heavy Gear, focusing on hobby aspects, game play of Blitz, and a bit on background; and culminating in a short battle report between myself and Spanky Harrison using the forces present in the box.

Some of you may remember Heavy Gear from the mid-late ‘90s and early ‘00s before, for some reason that won’t be discussed here, it just kind of vanished.  But during that time period, Heavy Gear was “that other mecha game” behind BattleTech, a game that was coming into an extant market with a rules set that was pretty good, but probably not good enough to dislodge its competitor’s genre-market dominance. In the late ‘00s, it started coming back with a new system, Heavy Gear Blitz; and now Blitz is in general publication and release, and has been for two or so years.  This box was released last September, and it’s a fine release complementing the prior general release of the base rulebook and the ongoing expansion of the range of supplements and miniatures. Opening the box, you’ll find a multi-pocket blister case containing six unassembled miniatures with what seem a huge number of parts, four dice, a sewing tape measure in a yellow case prominently stamped with the game’s name, a small pamphlet, and two digest-size books.  Setting aside the miniatures, the tape measure and dice are kind of expected; and these tape measures are increasingly common among anyone who’s had anything to do with Heavy Gear Blitz in the past couple of years.  Decent, usable, scaled in Imperial on one side and Metric on the other. The books are nicely done with full-color paperback covers.  The interesting this is that, unlike the BRB in the 40K intro box, the thick rulebook here IS ACTUALLY THE RULEBOOK.  As in, the COMPLETE book; DreamPod9 just scaled it down from standard to digest size.  The Field Manual has additional rules to help streamline the game and fix some of the hinkier mechanics, as well as containing errata and updates for the material in the rulebook.  These two books are literally everything you need document-wise to play the game. The paper sheet included is a guide on where to start and how to build your new miniatures.  There are three each of Hunters and Jagers (respectively, the Northern and Southern general purpose Gears, functionally identical and cosmetically somewhat different.), with options to make one of them a command model (the Headhunter or Command Jager) and another a “weapons carrier.”  For the North (the brick-panel Gears), the Assault Hunter trades its standard autocannon and rocket pod for a long-barrel snub cannon; while for the South, the autocannon is exchanged for a medium bazooka.  In addition, there’s an option to trade either the command Gear or regular trooper Gear’s standard autocannon for a medium autocannon; I personally have not chosen to do so, as I want the Hunters (Spanky’s doing the Jagers) to be as generic as possible while still being the core of a Northern General Purpose squadron. I’ve taken the liberty of going ahead and assembling the Hunters as presented above.  In the center rear is the squadron leader’s Headhunter; to his left is the standard Hunter with light autocannon and rocket pod; and kneeling to his right is the snub cannon-armed Assault Hunter designed for tank hunting.  As you can see from the image below, the size of the models is slightly smaller than 40K standard.  While obviously standing taller than the Hunter, the actual shoulder height of my Disciples of Caliban Captain is only a five or so millimeters above the shoulders of the Hunter itself.  And no, the scale’s aren’t the same. So that’s the unboxing analysis and review for the Heavy Gear Blitz Two-Player Starter.  I’ll talk to y’all in just a few with a brief background of Heavy Gear’s primary setting before moving on to the more-advanced analysis of collecting and painting Northern forces; and Spanky’ll be popping up with primers on game play and painting Southerners.

Before I go, I’ll go ahead and give my usual rating; and this time, I can’t really find any fault with this set.  For completeness, ease of use, price point value ($67.00 US), and frills, this set had it all.  The models are easy to assemble, and the developers give advice on what they think you should do; I mostly went with the advice, and was finished with assembly inside an hour, clipping, cutting, and filing included.  If two people each got a set, in less than an hour they could be throwing down with a Squadron against a Cadre.  For those reasons, I believe this set to be superlative and well worth the investment for anyone interested in Heavy Gear Blitz.

Have at it everybody.