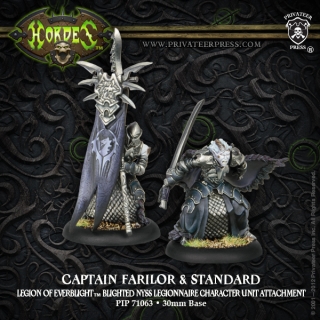 Hi gang, Caldera here to talk to you about Legion of Everblight!   Today’s topic: Captain Farilor.

It’s a very exciting time in Warmachine right now.  Lots of new models are being released and loads of previews for models to come.  What I am going to talk about today is the release of Captain Farilor and what this means for Everblight.

I have been proxying the Unit Attachment for Farilor since the Domination book came out.  I briefly stopped using him when I was practicing for Adepticon because the model wouldn’t be available.  Now that he is coming out soon on shelves, it’s time to showcase what he can and cannot do.

Captain Farilor brings Set Defense, Iron Zeal and a Weapon Master Swing.  In addition to his Weapon Master quality he also has Cleave for just himself.  Also the standard has the Magic Static ability.
–  Set Defense is going to allow Legionaires to absorb charges from regular infantry and warjacks.  Anything with MAT 6 or less is going to have a hard time hitting them on the charge.
–  Iron Zeal puts Legionaires on par with Khador Jacks Armor.  Also, it makes them immune to stationary and knockdown.  Combine this with Set Defense and you have a very resilient, cheap unit that can sit in a control zone and stay there.
–  Having the Weapon Master quality on Farilor sets up some interesting situations where they can now threaten heavy jacks with a Combined Melee charge from Farilor for a big hit!  Provided that you can get the whole unit into melee range with the target, Farilor will be swinging at a mighty P+S of 21!  That’s going to do more than scratch the paint.
–  Magic Static is a neat little ability that doesn’t come up that often but does save your unit from being truely hampered by abilities like Crippling Crasp, Black Spot, or Icy Grip.

Elite infantry and warjacks will still kill these guys pretty easily.  Then again, your opponent is having to use valuable resources to deal with your cheap infantry.

Widowmakers or any other sniper type unit/solos will eat Legionaires for breakfast.  It’s what they do.

Any enemy models with Anatomical precision or like ability will also be something to look out for.

With the upcoming Colossals and Gargauntans, we need to think about where Legionaires fall into the scheme of the new meta that will happen.  Will Legionaires still be worth it or not?  Will they be too expensive for what they do?  Do they still accomplish the reason why you take them?

I think they most definitely will.  What the Colossals will bring to the game is the ability to kill lots of infantry.  Lots of AOE’s being tossed around and auto-hitting lightning and such.  I think Legionaires are one of those units that can take those hits and keep on trucking.  Their armor is high enough to not be instantly killed by aoe damage.  Farilor makes this even more true on a turn when you know you are now in range of all those guns, that’s when you pop Iron Zeal and laugh at the pop-guns!

All in all I think Captain Farilor is a great addition to the Legion arsenal.  He is a little on the steep side points wise but I think most Legion players are used to that by now.  Bayal is also the same points cost but when you reach for Hex Hunters, you almost always reach for the UA as well.  It’s the abilities they bring with them that you pay for and I think Farilor’s abilities warrant his points cost and inclusion in the list.

Thanks for reading and I hope you guys look forward to more Legion articles in the future.