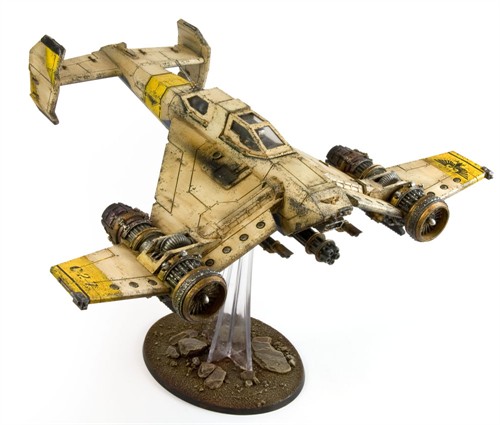 Reecius from Frontline Gaming here, back like a bad habit to talk about Forgeworld in tournament play.

Forgeworld is a hot ticket topic now, as it usually is, particularly among the tournament crowd. Last year we proposed to introduce non-super heavy, non-gargantuan creatures into the Bay Area Open and all of the events that follow the BAO format that we run (Comikaze, Duel Con, KingdomCon, Celesticon, and of course, the BAO itself).

We had about a 50/50 positive/negative reaction then, but the negatives were very opposed to it while the positives were more of the opinion: that sounds cool, let’s do it!

As running tournaments is a risky and expensive endeavor, we decided to take the conservative path and go with the nays. After all, we don’t play in our events so what we prefer isn’t what really matters.

This year, with the release of 6th and the cranking of the power levels of pretty much every army way up due to the new rules, allies, etc. we figured now was as good a time as any to introduce FW into the tournament scene. We use FW here at the shop and in our gaming groups all the time. I have personally used FW for years, and have never found them to be half as overpowered as a lot of folks out there would have us believe. As a matter of fact, particularly now in 6th ed, they do a lot to help balance armies out, particularly in regards to Flyers. In general they are overpriced, but flavorful and fun units with a small group of them being pretty dang powerful, but no worse than what you can pull out of the basic codices.

This time around, when we reached out to our tournament attendees, we had about a 90% positive reaction! That was awesome and we were really happy to see the community opening up to the idea of expanding their gaming horizons.

So, last week we made the decision to move forward and include FW units in all of our events so long as they are neither Super Heavies, or Gargantuan creatures; but not to include FW army lists as we felt that might be a bit too much, too soon.

What this means is a truly exploded meta. Now, the game has become so diverse and so big that you are highly unlikely to see the same 3 lists over and over. That may still happen of course, but the odds are reduced. I am a “hardcore” tournament gamer too, playing almost exclusively in preparation for, or in tournaments. I care very much about balance and fairness, and in my opinion (and the opinions of my fellow TOs and Zero Comp teammates), FW will only increase the enjoyment and fairness of playing this game of ours at events. I have played in a LOT of FW tournaments and leagues too, and not one time have I seen an army with FW beating all comers or even winning an event. Some of the units that made people feel the most uneasy (if not outright Nerd Rage!) have really gotten the Nerf bat due to Hull Points, but in a good way. The Land Raider Achilles for example, was one of the most feared units in FW (and honestly, we didn’t think it was anything to jump up and down about even in 5th ed, we all felt points would be better spent on other units after trying it in about 6 games) and now it dies relatively easily. Is it still good? For sure, but nothing to go crazy over. However debating the pros and cons of each individual unit isn’t the point of this article.

The point is to address the root of people’s opposition to FW in tournaments: fear. People were afraid of what they didn’t know, what they perceived to be too powerful, etc. Now, there are units, combos and Psychic powers in the basic game that are so incredibly powerful that they make some of the most feared units in FW look silly. We’ve been really digging into the guts of what competitive 40K is going to be (of which we try to document a large number of our games on our YouTube channel) and we feel that the game will only be made better by the inclusion of FW. A lot of armies get units through FW that beef up their weaknesses. Even more armies get a ton of units that are just cool to have on the table top, and the rule of cool counts for a lot in our minds! We are playing with toy soldiers, after all. We’ve also made the decision to keep our events at 1,500pts for now while people acclimate to the new rules. As time goes by, we hope to increase that back up to the 1,750 limit we had found to result in the highest percentage of completed games within the 2hour and 15 minute per round time frame we had to work with. We are finding games just go slower in 6th ed so this may not happen, and we would rather players have too much time rather than not enough in the early days of 6th.

A lot of events and entire countries in Europe have been using FW in tournament play regularly for years. During this time I have heard of no events where FW has been dominating the scene and that it was a mistake to include it. In fact, I hear nothing but the opposite from these events that the inclusion of FW has made them more enjoyable, or that the attendees didn’t even notice the difference.

Everyone who brings FW units to our events is required to also bring all the most recent rules for the unit and to go over them with their opponent. This way no one will be caught off guard. We will also be featuring FW units in our video battle reports and tactics articles over at Frontline to bring folks up to speed.

So, if you live in an area where our events are a reasonable trip for you, and you have some FW goodies you’ve had your eye on, or that have been languishing on your shelf, dust those babies off and get ready to rock! We look forward to all of the great gaming moments, and eye candy, that FW in the tournament scene will bring us.

How do you all feel about FW in events, and what do you plan on adding into your lists?