Goatboy – Return of the Death Star! 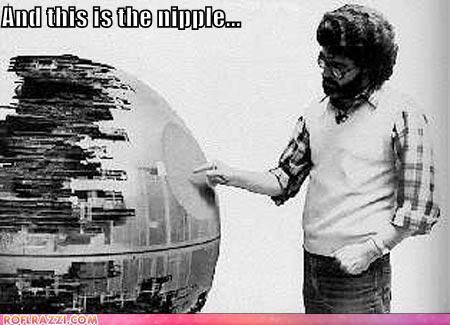 Goatboy here again and today’s 6th Edition discussion is the return of the Death Star in 6th Edition.

We all know what a Death Star is when dealing with Warhammer 40k. Paladins with psychic machine guns, Nob Bikerz wanting to steal your candy, and even Thunder Hammer termies stomping around the yard are all known Death Star units. 6th edition seems to bring the pain back and as usual in any “new” rule set the Death Stars can be frustrating until the collective conscious figures them out.

So the question is why does 6th edition give a big pump to Death Stars? Well it all comes down to some new rules that helped create these new monsters of 40k. So with that in mind let’s look at these new options. Who’s Tough Now!
The biggest start of the soul crushing bandwagon is the change to how toughness upgrading options work. Instead of keeping their own toughness value any upgrading option now changes it just like the Thunder Wolves did. This is a huge thing as it creates some hard to deal with units. Nob bikerz become a massed Toughness 5, an over-excited boyband of pain with that rule. You can’t fix the issue by throwing in a bunch of Powerfists and Thunder hammers. This also works with some other multi-wound biker options in some of the marine builds. Can you say the revenge of the Swift Claw bikers lead by 4 characters? This really only seems to affect multi-wound options with increased toughness so we won’t see to many of these types of Death Stars. This rule change starts the boulder rolling so we’ll look at some of the bigger rules changes.

“I Ain’t Got Time to Bleed”
Feel No Pain got a nerf and a boost in this new edition. Just like in 4th edition you can FNP any non instant-death wound. This is pretty huge as you will have a unit that will normally always have 2 saves before you get to put wounds on their chewy center. You mix this with the toughness bump and you got yourself a mean little unit that can go from their deployment zone to your zone in no time. This change helps all those Paladins survive that plasma fire that shows up from time to time.


Look Look Out Out Sir!
The next rule change is the tweaks to wound allocation and the special USR called “character”. Kirby explains it pretty well in his post so I won’t go into how wounds need to be allocated. This ability to “assign” wounds easily and to models that are effectively immune to most common “strength” weapons means that these Death Stars will last longer and be more of an issue than before. I am not fully convinced that it needs to change as this type of option gives the player more avenues to “decide” the game as well as create a “cinematic” experience. These units are supposed to be full of the toughest options in the universe so allowing them a lot more freedom to survive and do damage is something I think GW thought about. We’ll find out for sure when we get a chance to see some real GW approved battle reports in upcoming White Dwarfs or if they decide to truly FAQ it. I think a big change to tweak it would be to add this to the wound allocation rule – “Each time you allocate a wound using look out sir, it must be placed on an already wounded model if possible.” ~You reading this Mr. Ward?

I Challenge Thee!
Another fist pump to Death Stars is the addition of Challenges and trying to only allow a small amount of wounds given to any super character jumping into combat. The character USR allows for any of those models to issue and accept a challenge. This let’s you “sacrifice” a nob’s two wounds to a Super Wolf Lord, Chaos Lord, or any other heavy damage option. In fact with most of these characters only rocking at most Strength 8 you can easily make those two wounds extremely difficult to get from your “super” character.

Like a Scalpel
The final kick ass move these type of units offer is the ability to “precision” strike. All of your nob bikerz are shooting “targeted” shots and half of them you will get to choose where they go. Paladin’s Psycannons will most likely fry that special weapons guy or at least force a ton of wounds onto that IC in the unit. A failed 2+ Look out Sir roll and they could just go poof in a hail of psychic bullets, crap ammo, or just a ton of combi-fire. If the challenge is not including an IC you can also precision strike your close combat attacks to very specific options in the unit as well.

All of these things create a new landscape of games determined by expensive blobs of models. I know it will take a bit to allow for everyone to “figure” out how to deal with this and so I feel it isn’t nearly as much of an issue as others fear. We’ll have to wait and see if the next few month’s events become seas of billowing smoke and the sounds of over charged engines.

~So what’s your take on the power of Deathstars in 6th?