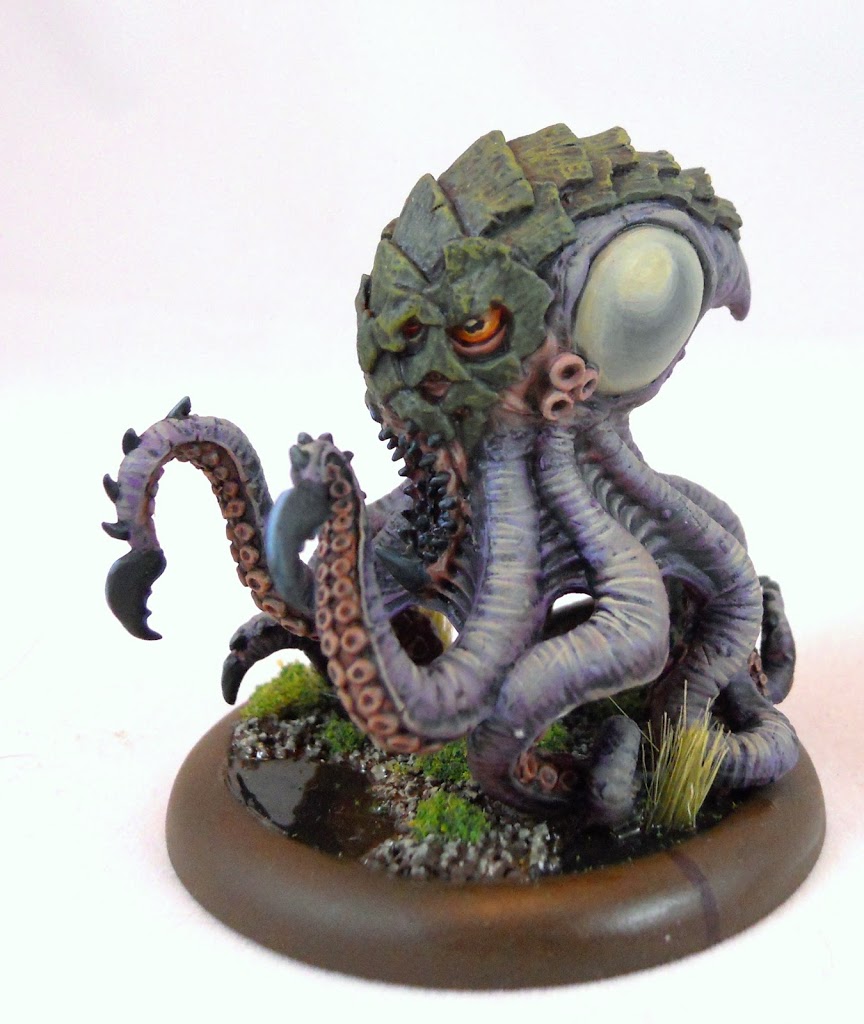 I recently posted an article on one of my latest conversion projects: the Swamp Horror.  It only seemed right to follow that up with a painting article to explain the rest of the project.

Of course before I get started, a brief preface.  I’m still using a lot of GW colors from the old name range.  So a lot of the color names I’ll be using will be out of date.  Here’s a link to their conversion chart if you want to check it out.  To make things worse, I do have a few of their new colors so I’m also going to be inconsistent.  I don’t like it either.  If it was up to me I would have just kept all the colors the same name.  In fact, as a result of the name change I’ve just gone ahead and started using a lot more P3 colors so they’ll be getting mentioned a lot too. With that out of the way, lets move on. After cleaning and assembly, I base the model in the old GW foundation color Tallarn Flesh. Next is the fun part.  I take Vallejo’s Green Ink and GWs Leviathan Purple and Asurmen Blue washes, and apply them haphazardly over all the sections of exposed skin to shade it. Then I drybrush everything with this color for the first highlight.  It’s GW’s Liche purple with some of their Elf Flesh added. Now I’m going to start mixing it up with different layers of color.  Instead of highlighting with another purple I’m going to use the blue below.  This is a mix of a few different shades of Vallejo blues.  It’s actually a bit darker in person than it showed up in this picture.  If you want to try to get a color like this with GW paints Lothern Blue and Fenrisian Grey would be a good place to start.  For P3 you could try mixing Arcane Blue, Greatcoat Grey, and Cygnar Blue base in varying amounts. I apply the blue in thin layers so that it bleds in nicely with the purple beneath. This warm gray, which I mixed for my Rök, is the next highlight.  It’s actually a little lighter than it appears in this picture.  Again its mostly Vallejo colors, but you could get a similar gray by mixing any pale flesh tones with a gray. I try to make sure there’s a visible transition between the gray, blue, and purple. The final step for this part of the Swamp Horror is to highlight with P3’s Thrall Flesh.  Then the suction cups, ears (?), and the areas around the mouth and eyes are painted with Tallarn flesh again. The Tallarn Flesh areas get a wash of Ogryn Flesh with a little bit of Agrax Earth (I think this is the only “new” GW color I’ll be using in this article) added to darken it some.  While that wash is drying I start on the carapace.  This is basecoated with a mix of Catachan and Camo Green. The carapace is washed with a mix of Ogryn Flesh, Agrax Earth, and Baal Red.  I also decided I wanted to get the Horror’s weird membrane, or whatever it is I’m supposed to call the oval on his head, out of the way.  My take on this thing was that it was supposed to be something used for communication.  Like an air bladder that the Horror would vibrate to look for a mate or something. To that end I looked for something similar in nature to compare it to.  In this case a frog’s throat.  To try to visually achieve this effect, I started with pure Thrall Flesh on the edges of the shape, then added just a little bit of black in stages to blend it darker as it approached the middle.  The idea was that this sack of skin is being filled with air.  As it expands the skin closer to the center is pulled thinner, making it translucent and showing more of the dark interior.  Here’s a picture to kind of try to show what I mean. Next I added a reflective highlight to the membrane.  I think I made it too big here but I really wasn’t in the mood to redo the whole membrane again.  I also did all the claws/spikes/teeth/assorted other hard pieces.  These were painted black and highlighted up with all P3 colors.  First coal black, then with a bit of Trollblood base, then with Trollblood base mixed with a bit of Morrow White.  I also started the eyes by painting them with GW’s Blazing Orange.  I also highlight the previously washed Tallarn Flesh areas with Dwarf Flesh, then with a lighter mix of Dwarf Flesh and Elf flesh.  We’re getting very close to the end now. Let’s take a look at one of those eyes.  When you get a chance to do big eyes like this you can get very good results by painting them almost exactly the same as you would gemstones.  That means reversing the usual highlight methods. So, dark at the top, then lighter as you blend down to the bottom.  This will create the illusion of a transparent object refracting light.  For these orange eyes, i used GW’s Scorched brown as the darker color and then blended it down to pure Blazing Orange at the bottom.  To create the iris, I mixed Blazing Orange with Bleached bone and then painted on a sideways “8” shape in the middle of the eye.  I painted over this shape with a smaller black “8” leaving behind only a thin line of the original light orange color.  The last step was to add a single highlight point in the middle with GW’s Bleached Bone. There’s not much left.  Before I did the eyes, I finished off the Carpace by drybrushing it with the original basecoat, then with pure Camo Green.  I also felt like the highlight on the “membrane” was a little too much.  I painted over the lightest parts of it with Thrall Flesh to tone it down a bit.  Then it’s on to basing.  The whole base is painted with a mix of GW’s Scorched Brown and Snakebite Leather.  The dirt on the base is drybrushed with GW’s Bleached Bone, then washed with their Agrax Earth.  I left some areas on the base clear so I could apply some water effects.  I glued some grass into those areas for reeds before adding that water.  After it dried I applied some standard green flock to represent a little foliage on the ground.

And here’s the converted one again just in case you missed him. ~ Hope you enjoyed the article.  It was a fun model to paint, and I can’t wait to use it with Maelok soon.