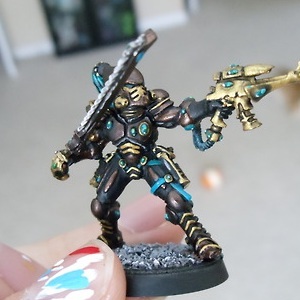 As part of our new series, we’re casting a look at the painting and modelling skills that people have uploaded to the BoLS Hobby and Project Lounge.This week is selection of some of the newest posts.

Shades; Good Morning all and welcome to Best of the BoLS Lounge, with DrLove42 and Sotonshades. The Hobby and Project Forums in the Lounge gets a huge number of posts every day, with people showing off everything from their first steps into the hobby to fantastical, fully-painted armies. This series of semi-regular articles will give a overview of a few of our favourites along with commentary from the good Doctor and myself as to why we’ve picked them. We will also be leading the occasional Expolarator expedition into the Archives deep in the BoLS Lounge to dig up some truly inspirational WIP threads and fully painted armies that deserve a fresh airing.

Doc; We’re gonna start things with some nice recent pictures and posts from the forum to give you an overview of what some of our talented posters have contributed to our digital ranks recently. We will endeavour to show off a few different models every time. For this first issue, we’ve stuck to the parts of the forum we’re most comfortable with; 40K models (after all with 6th so recently upon us, it’s kind of all we can talk about right now). But in the future we’re hoping to show off great painting from all systems, be it Fantasy, Flames, Warmahordes, Dust, Infinity or any of the other games out there.
Shades; So without further ado, let’s jump right in with Cvife’s Stormtalon. Shades; I have to admit, I am not a fan of the Stormtalon model, but Cvife’s simple colour scheme really does help make the best of it. I really like that the long stripes help lengthen the model visually. Just like his Death Guard, the white manages to be heavily weathered but still very crisp.
Doc; I agree, having played against his pre-heresy Death Guard in the past, I am a big fan of his work. I’m also a fan of the way the pilot is lit up by his dashboard. Look forward to seeing more from his Novamarines soon. In the mean time you can find his Pre-Heresy Death Guard here.
Shades; I actually think the cockpit is a bit bright and would have liked to see the Novamarines’colours showing through in the shadows at the back, maybe with slightly more focus to the brightest highlights, but that is a very minor criticism on an otherwise fantastic paintjob.
Doc; And from models that have had the living hell smashed out of it to some nice crisp clean Eldar. Autarch is a new poster on the BoLS forum, but clearly not a newcomer to the correct end of a paintbrush. Doc; As an Eldar player it’s always refreshing to see some nice Eldar models. I’m a particular fan of how clean and crisp the painting on the Razorwing is; no mean feat for such a large area. The non-traditional Scorpion paint scheme is also a big hit for me (which can be found by clicking through to his thread). The finish on the bases just caps it off, looking forward to what’s in store for the large base of the Razorwing
Shades; I really like the fluffy reason given for having his Eldar and Dark Eldar in the same army and colours. The muted reds and gold are a classic combination, with the blue really standing out as a great spot colour. As for the Striking Scorpion, I love how he fits in with the overall look of the rest of the force while maintaining the feel of his aspect; something I always enjoy seeing in Eldar armies. Autarch also mentions these are his ‘front burner’ projects, so I can’t wait to see what else will come off his paintstation.
Doc; That’s one of the good things (and few good things from my point of view) about allies in 6thEd; the variety in armies and the cross army colour schemes. As well as the beginning of a new “counts as” era you can just have some inspirational, fluffy, well-painted armies.
The next modelling showcase on here is another perfect example of this. Fresh from a showcase on the “Whats New” Blog on GW’s website comes Straightsliver’s Magragge PDF which are a great fusion of Ultramarines and Imperial Guard. Doc; From the Chimeras to the Vendettas, the Roughriders on bikes, the Dreadnought and all the wonderfully painted guardsmen, I have a hard time picking a favourite part of this army. All fantastically well painted and incredibly fluffy. I think the paint scheme really works very well on the Guardsmen.
Shades;Absolutely. Over the years I’ve seen several attempts at Macragge PDF, but I can’t remember any of them coming close to this level of dedication. The combination components from Space Marine and Imperial Guard tanks has made for some unique conversions that really help tell the story of the army every bit as much as the linked colour scheme. The same is true of many of the conversions of the Guard characters, which you can see earlier in the thread. I think my favourite thing about this army is the almost fanatical attention to detail Straightsilver has put into each model. With over 80 infantry and 14 vehicles, that isn’t something that’s easy to do.
Speaking of attention to detail, we’ll take a step back from with wider galaxy now to look at the gritty underhive that is Necromunda, specifically daboarders kitbashed custom gangs! Shades; daboarder has really gone to town converting and customising three gangs for a friendly campaign from the Houses Van Saar, Escher and Goliath. Not only has he managed to avoid using any of the old metal models (which, as he rightly points out, are beginning to show their age) but each of the models has really captured the essence of their respective houses.
Doc; I think the green works really well on the van Saar gang, and the creator’s ideas about using the hair colours as a focal area of the model, which will help identify them quickly in a dark underhive table, but also draws the eye to the model (not that the green doesn’t!)
Shades; So much thought has gone into these gangs. All the components have been chosen carefully, with nothing added without reason, and then painted to really represent what each gang would have access to in the Underhive (very little Gold for example). It really is an early WIP thread, but I for one really look forward to these kinds of threads; something a bit more unusual, crammed with detail and a bit different from what we often see modelled just to fit with the 40k tournament meta (first person to paint up a Guard veteran Squad with a grizzled looking Sergeant, a sniper Specialist, a Grenade Launcher and some A-Team style lunatics will make me a very happy Shades, even though it’s probably be a useless unit in game!)
Doc; And lacking any intelligent segways to our final choices of models, allow me to introduceEnergongoodies Iron Hands. I’ve always been a fan of Iron Hands and feel they get the short end of the stick in both the fluff and in modelling support. I don’t think I’d be wrong in saying they’re one of, if not the only founding chapters with no official representation on our table tops. So that’s what makes this army so worthwhile for me. By sticking to a very mono-chromatic paint scheme the eye is always drawn to the spot colours, be it the eyes, the base or the purity seals. And let’s face it, who doesn’t love the Contemptor? Shades; as far as I’m concerned, this is one of the best ways to use Object Source Lighting; subtly. energongoodie has kept the glowy eyes effect to a minimum, unlike some I’ve seen where half the faceplate is an odd colour, and only lightly altered the colours where they are lit by lava bases. It is also great to see expert application of a shaded black, rather than simple point/extreme highlighting or drybrushing. I can only hope this gets at least a few people wanting to try their hand at Black Templars, Black Legion or some nicely converted Arbities
Shades; That’s it from us today. Check out the links to these threads; these guys have a ton of other pictures to make you drool. Whether it is just to get your daily hobby fix or for inspiration on your own projects, it is worth taking a few minutes to flick through and find out what the artists thought about what they have done as well. Leave a comment too. I know I always like getting feedback and constructive criticism.
Doc; As I said at the beginning if these articles are well received we’ll continue doing them, and branch out in to painting in other systems. If you’d like your work to be considered for one of these articles just go sign up on the Lounge and post your stuff and if it catches our eyes, who knows, you might end up on the front page. The painting and modelling forums can now all be found in one nice easy place (CLICK ME). So go pick up your paintbrushes and cameras and start posting!
HOWEVER we have made the decision not to feature anyone who is a“commissioned painter” (even though they’re better than us). We’d rather feature models from people who do this as a hobby, not a job (not that theres anything wrong with that!).