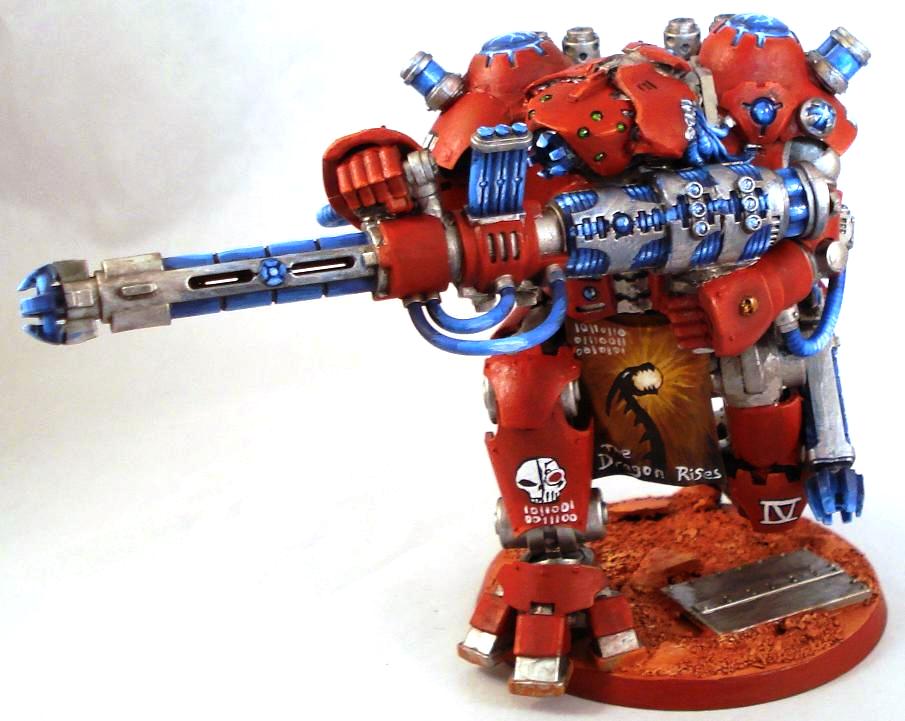 As part of our new series, we’re casting a look at the painting and modelling skills that people have uploaded to the BoLS Hobby and Project Lounge.This week is an amazing total conversion army.

Doc; There are some projects that just go above and beyond the normal call. These projects deserve extra attention in my opinion, which is why in addition to just showing off the models people have added to our forum, we’re going to occasionally take a dedicated look at one individuals army, and take the time to ask questions to their creator about it.

Shades; Sometimes this will be something from ages past, back in the earliest days of the BoLS Lounge when the Fly Lords were newly inaugurated, Eldargal was merely a guardian and Goatboy was more like Goatkid (Ok, so that last one didn’t work so well…) Today though, we will be looking at something a lot more recent to kick us off and guarantee we could get an interview!

Doc; When we first thought of this article, one army immediately sprung to mind, and that is the work of Isotope99. His Necromechanicus is a masterpiece of converting and counts-as, but his older projects, including Dark Eldar, Eldar Exodites, Heresy Era Thousand Sons and Deamons, show incredible work as well. (I’ve put captions on the models in this article to help you know what they are)

Shades; That’s right. There are certainly people out there who aren’t a fan of some of his creations or think they would be confused playing against such highly converted forces, but I don’t think anyone could deny the level of passion and dedication applied to each and every model in this project. So, before I start rambling too much, let’s have some words from the man himself;

What Inspired you to start this project?

Iso; My Necromechanicus army (or Mechanicrons) started with just the miniature Titan model which I built from a defective Shadowsword kit that I got replaced (2 left track sections). I wanted to take it to the table and the only model large enough was the monolith, hence its portal gun instead of a close combat arm.

From there the creative part of my brain started throwing out other ideas like the Dreadknight sniper guy and Servo-skull swarms so that the one model became a whole army (or will be when I finish it).Doc; What were the hardest parts, in terms of modelling and painting, for you on this project?

Iso;Knees on the walkers – Torsos are fairly easy to do as they’re quite boxy, but trying to scratch build or repose legs is much tougher (probably why everyone uses defiler legs for this sort of thing).

Sleeves – Cloth is never easy and these skitarii sleeves were pretty tricky (though I seem to have got the trick down for the second squad I’m working on). Eventually I decided the best way was to keep as close to the real thing and use a flattened piece of green stuff carefully folded together with extra creases pressed in with a sculpting tool.

My painting is much less ambitious but the portal effect on the night scythe was especially hard to paint. It’s a tough effect on a normal surface but the cross shaped flying stand made it especially hard; Fairly pleased with the final result though.

Doc; Anything you learned from that and would like to pass on to other hobbyists

Iso;There’s a limit to how ambitious you can be when gluing on bits (either that or the GW plastic glue has become really cr*p and brittle, as some of the models were literally falling apart in my hands). Always try to find two points of attachment if possible when gluing things together or you risk knocking bits off.

The new GW paint range does red really well compared to the old version (Mephiston and Khorne Red) but you go through it even faster.

Doc; What was/is your favourite piece in the army?

Iso;I think it has to be the second Destroyer Lord taking apart the Wraithlord. I wasn’t sure that would even work given the ambitious posing but it tells a nice story showing the Mindshackle Scarabs in action as he salvages some ancient xenos tech. Hopefully you can imagine the Wraithlord’s desperation not to have its exposed spirit stone stolen.

I’m pretty pleased with the mini-titan too though.

Shades; I can certainly understand that; he’s one of my favourites too. How are they received when you put them on a tabletop?

Iso;I’ve not played a serious game with these guys yet, but it’s not my first counts as army and my Exodites and Thousand Sons had no major problems. I always put pictures on the army list which provides a reference for my opponent (I’ve even done labels out of movement trays for this army just in case) and hopefully there’s enough internal consistency that only one or two of the walker models are confusing and they are easy to explain.

Generally, people like playing against unique armies so the ‘rule of cool’buys me some WYSIWYG forgiveness. Main contention is usually cover, but a 5+ compromise is usually sufficient here. I’m not a very serious player so I’ll yield the point rather than arguing most of the time. Shades; Both your Mechanicus force and Thousand Sons are very bright. Is this a conscious style you’ve gone for, or just the way it has happened?

Iso; It was definitely the intention for the sons, less so for the others. I often start out expecting a more muted colour scheme but then adding brighter highlights as I go.

Shades; Did you think about toning down any of the models? I might have been tempted to do so on the basic troops and/or vehicles so models like your Destroyer Lords stood out even more.

Iso; I definitely thought about it. I find some armies reward total individuality (the Mechanicus, Thousand Sons and my older Ork army) as I think it fits their style. Other armies like the Eldar look better with some more uniformity and variety added through pose or on specific models (like my Exodite monsters). One of the reasons I don’t have a functioning regular space marine army is I keep getting sidetracked by individual models and the force as a whole doesn’t hang together.

If I go the Imperial Guard route for my next army this will be something to (ahem) guard against.

The other major reason is I switch armies so fast I always want to squeeze in all the fun centrepiece models I can. This might be one of the reasons why my tournament record is pretty average as variety is often prioritised over tactical effectiveness.

Doc; You use a lot of FW models in your conversions. It is scary or harder to make conversions on the more expensive models?

Iso; I try and avoid major reposes with FW models, because it’s harder to cut and join the resin compared to plastic, the details are mostly moulded on rather than on separate components so the usual process of major structural changes followed by detail is harder. I mostly stick with adding details using plastic parts and green stuff.

There’s a nice clutch of mid range priced models (for FW anyway) that look way better than the updated finecast stuff and which can be converted to make unique centrepiece models.

Iso; This army is almost done, so next I’ll either go back and 6th edition up one of my other armies (my Thousand Sons are all set but my Eldar Exodites and Dark Eldar will need adjusting I think) or start a new army. Main contenders are:

1) A guard army based on the Valhallan 597th from the Ciaphas Cain books; Female great coat guardsmen on an ice world base should be a decent challenge and I’d like to build some of the book characters. Or;

Shades; I love the sound of the Valhallans. Any excuse to go back and re read through some good books for character names sounds good to me

Doc; Frankly I love the idea of the Carnivale thing. Just sounds plain out creepy, wrong and totally awesome. Lastly, do you have any other comments you’d like to make?

Iso;Thanks everyone for all the comments in the Lounge, constructive comments are always appreciated and I have changed a few models based on feedback received. Ego-boosting praise is also always welcome too of course .

Shades; Thanks very much to Isotope99 for taking the time to answer our questions. We’ve only been able to show a few pictures from his Lounge Thread. I’d strongly advise you all to head over there now (well, once you’ve finished reading our article!) and have a good scroll through the rest, especially some of the WIP shots.

Doc; Hopefully these posts can help inspire you into some projects, be they small or as ambitious as these. I will highly recommend checking out his other armies threads on the Lounge as well to see even more. As mentioned his past work includes Dark Eldar, Exodite Eldar, Deamons or Heresy Era Thousand Sons, a few examples of which can be found below Since the interview with Iso he has started production on his next project, Valhallan warriors based on the Cain books. We look forward to seeing what the rest of the army will look like! And we finish this article by encouraging you to pick up your paintbrushes and cameras and get those models on the forums! We’ll hopefully continue running articles featuring the best of the Lounge posts, in any system (40K, Fantasy, Warmahordes, Infinity, Flames, DUST or any other alternatives!)