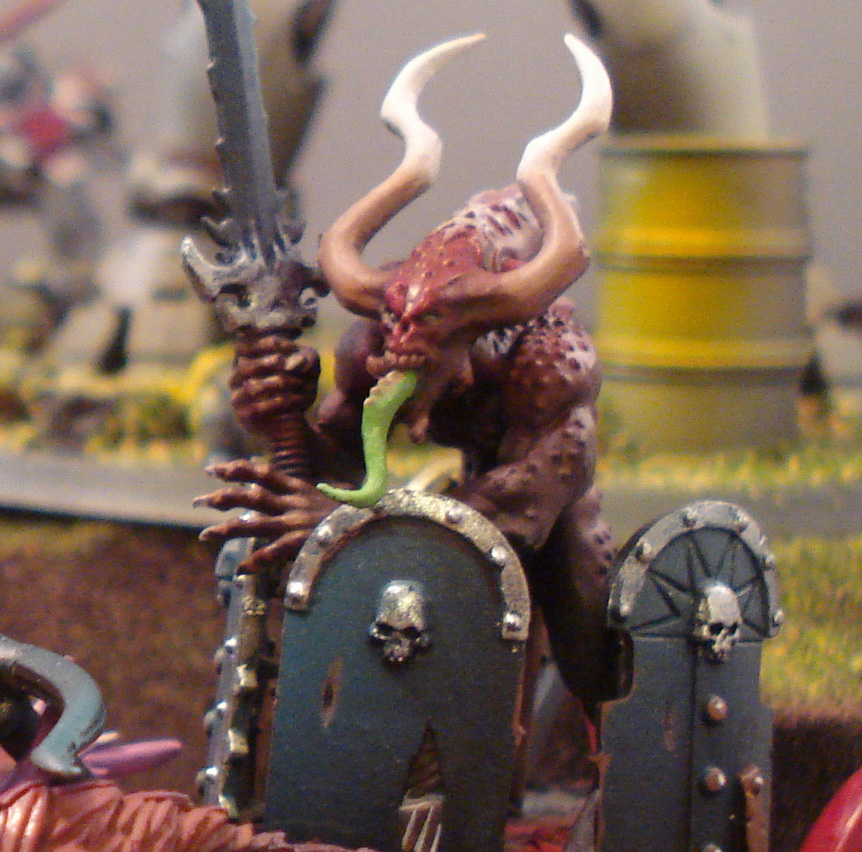 Daemons of Chaos for Warhammer 40000 have received a new edition, an updated FAQ, and – heck, why not! – even new models and rules in the latest White Dwarf…

…so I guess it’s about time for an updated Daemonic Primer.

Darn it all.  (Yeah, I’ve been putting this off for awhile!  So much so this article is Part One of Two; sorry for that in advance, but there is a lot of field to cover.)

Hello again folks, Brent here with another Terrible Tuesday offering – and this article hearkens back to my roots.  I hit the national tournament scene in 2009 with Eldar, but it was with Daemons in 2010 that I gained a bit of traction – largely due to approaching the army a bit differently than the standard FateCrusher builds.

Moving on, here’s the army I took to the Adepticon Championships in 2011:

If you’re thinking something like, “Wow, that won’t work,” then I’d agree before pointing out this was in the days before Dark Eldar and Grey Knights.  (And of course 6th entirely!)  Massed poison weapons made Monstrous Creatures dicey… and we all know just how brutal the Knights are.

And they’re made to kill Daemons to boot – thanks, GW! So my tournament army of years past reached its peak at the Championships of Adepticon that year, reaching the finals Sunday before stumbling to Jay Woodcock’s beautifully painted Tyranids.  Tony K. went on to win, and since this has been a stroll down memory lane, here’s the video interview I did just after his win.

Daemon armies of the past won’t work in the new era of 6th Edition.  We’ll need a new approach, but before moving on allow me to point out that all this is just TheoryHammer.  Maybe that’s always true with these types of articles, but more so now:  it’s simply too early in the new edition’s history to say with authority, “This is great,” but “That’s just awful!” 6th Edition has become a battlefield of overwhelming firepower.

Can anyone point out another simple change with such far-reaching consequences to gameplay as the change to Rapid Fire?  This, along with Snap Fire and Overwatch, have firmly placed the humble Bolter back where it belongs.

As a weapon to be feared.

The previous edition was more about quality of firepower than quantity – and it’s why the Daemons army listed above always defeated Guard armies.  In tournaments, it didn’t fail to surprise Guard players how handily the Fiends could overwhelm their mech.  Simply put, most incarnations were littered with high strength, low AP weapons… that were wasted on an invulnerable saves.

Daemon armies can’t play that game so well in 6th, where anything inside 24-inches has to be beefy enough to survive the shooting phase.  (As an aside, this is also why mech is still important.  Mech was king; now it’s just balanced.) Fortifications, particularly the Aegis Line and Bastion – with the Quad Gun, naturally – are so beneficial in some armies as to be almost mandatory.

As this section takes shape, I have to wonder:  how many of you out there are also using these rules?  It seems much of the conversation taking shape revolves around limiting Fortifications, as if they are outside the scope of tournament play.

Here’s hoping that doesn’t pan out; the problem is tournaments have a funny way of influencing local play, what with all the people constantly tuning their armies.

Regardless, we’re seeing more Fortifications locally as an answer to Flyers.  The Bastion makes a great structure for a unit of Snipers or Devastators, with the added bonus of manning the Quad Gun.  The Aegis line, in addition to the emplacement just discussed, offers a 4-up save – a nifty defensive position.

And none of this really benefits Daemons!  Let’s face it, you’re not putting out a Bastion, and you’re just as likely to Deepstrike on the wrong side of an Aegis line… but it’s a pretty safe bet you’ll be tackling these every other game.

So what’s your plan?  The initial drop was nasty enough without doing so into a fortified position!  It’s something to plan for, but also segues nicely into… The new missions mean an army must be able to suffer gross casualties while maintaining mobility.

As well as the aforementioned fortified position, the strategy for placing Objectives seems to have changed.  Generals are very likely to set up as many as possible within 6-inches of their board edge – given they know which side they’re playing on already.

Of course, this assumes the players are using the order out of the book.  Just curious, but are you folks setting up your terrain in the alternating scheme or just laying out a board and rolling in the same fashion as 5th?

Regardless, Daemons have to be able to fight effectively in multiple areas of the battlefield.  Typically, this is something the army excelled at, being able to use Daemonic Deployment to react to the first third of the game… but these days Allies have shaken things up… …there is no ‘typical’ army.  I’m on record saying the game rewards balance, but there will be plenty of unbalanced beat-sticks out there, ready to throw miniatures like rocks at your head!

To close this point out, in 5th Daemons spent two turns getting on the field, setting up position, and weathering casualties.  The middle game was an ugly fight for board control, while the latter third of the game was a rush for objectives and/or Battlepoints.

You see, while Daemons have the advantage of an initial Deepstrike onto the field, choosing the sweet spots in the combat, the army was fairly slow to reposition.  You’d get one or two good assaults, then what’s left needed to grab hold and hold on!  Getting to turns 5 and 6 were vital.

Well now, the new edition has made all that just that much harder.

With so much ground to cover, it’s hard not to be a bit generalist.  By necessity, there had to exist some discussion for how the game has affected the army at large.  In next week’s article, I’m going to go through the units in detail, including what’s changed – for better or worse – and what role each unit is suited for. …just for fun, let’s cover my favorite unit of 5th Edition, the Fiend.

What wasn’t to like?  For 190 points I had a 6-strong unit of Strength 5 Rending Beasts (one struck at Strength 6) who could take on Infantry and Tank alike!  They were Fleet, and fast, and could Counter-Attack to boot – what’s not to love?  They were the (probably undercosted) workhorse of my tournament army.

But things change.  Fiends have taken a bit of a hit, largely because cover doesn’t automatically offer up a better saving throw at 4+ and I can’t play allocation games with the Champ.  All the firepower mentioned previously chews this unit up worse than before, and then – after all that – it’s simply not a great idea to multi-charge and pick up multiple units!

To add insult to injury, vehicles aren’t the light snack they once were, as the Fiends are more likely to cause Hull damage than Penetrating hits.

Not to say they aren’t good, but their role has changed – now they need to be part of a balanced breakfast! So, there’s Part I; here’s hoping you’re okay to wait a week.  Heck, here’s hoping some of you made it through the wall of text to begin with!