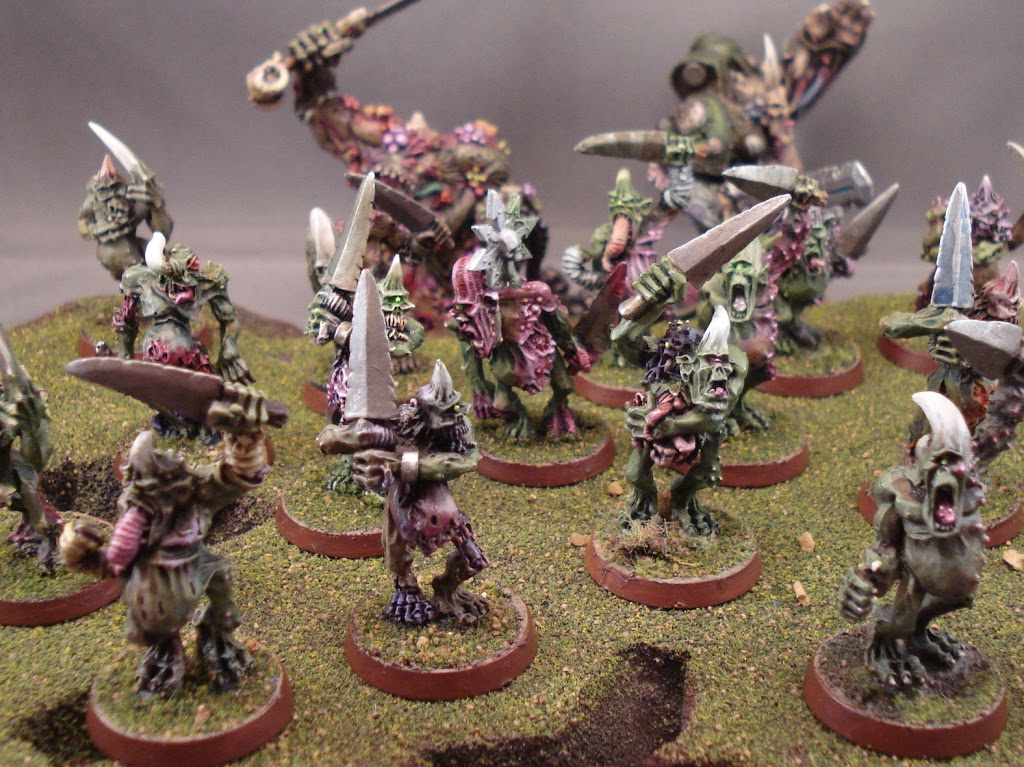 As the title suggests, this is the 2nd of a 3-part series of articles on Daemons and 6th Edition.  Part 1 lays the foundation for a discussion of Chaos Daemons, while Part 2, today’s article, explores the difficulty in covering subjects in 6th Edition.

By the way, many of you noticed this article was a week late; my apologies, but it’s been a bugger-bear to write.  If you’re curious, I’m tackling the subject on Strictly Average today.  But enough of all that!  There’s a lot to cover, so let’s get to it already.

The Problems with Speculation in 6th Edition

There’s something you should know about writing comprehensive articles in 6th Edition:  it can’t be done.  Not yet, maybe not ever.  Why?

Because 6th Edition Warhammer 40K has become a beautiful, complicated beast!  Take a concept, add in Allies and Fortifications and multiple Force Organization Slots – just to name a few – mix it all together, and serve it up online.

Seriously, who out there can even claim to have a real handle on this yet?  Hulk Smash, a veteran and the voice behind the blog They Shall Know No Fear, recently took three weeks off just to get some games in… …and just maybe have something to write about!

Discussing the army’s role as the primary army or an allied contingent.
Discussing the very significant differences between an army at 1999 or less and 2000 points and above.
Discussing Fortifications, offensive and defensive.
Discussing terrain, be it set up or Mysterious, tournament or knock off game.
Discussing army strategies in the six mission types.
Discussing Daemonic Waves in three deployment types, highlighted by first turn or second.
Discussing unit types, its role, and its usefulness in an army type or role…

…and so on and so on and… I mean, it just gets silly!  All I’m doing is compounding complexity, but isn’t the purpose of an article is to cut through some of the noise?

Cutting Through the Noise

What follows are my general opinions on Daemons and 6th Edition; the highlight is necessary ’cause who the hell knows how this is going to shake out a year from now? Monstrous Creatures still have a hard counter in Dark Eldar and Grey Knight armies.  Bad match-ups are a given in tournament play, but this can’t be ignored given the odds of running into one or both of those builds.  Flying Circuses are probably not a good idea, but Daemon Princes of Slaanesh with Wings and Breath could be fun.

Let me make this point clear:  a Monstrous Creature Heavy Daemons beatstick can and will win games in decisive fashion.  Until it runs into an army that ain’t a’feared of flying creatures, either through judicious use of anti-air, a metric ton of firepower, or both.

(Still, that may well be an argument we can apply to every major build, so play what the hell you want already!)

The Fate Weaver deserves some time on the board.  I’ve never been a fan, believing him to be too random to count on over four games.  That’s changed, ladies and gentlemen, Unicorns and children of all ages.  In the new battlefields of 6th, the Weaver’s particular brand of jankiness may make the difference between a winning strategy and losing most of your army in a few turns of shooting.

So the Weaver is good to lead Daemons if they’re the primary detachment, but I’m not sure I believe he has worth as part of an allied contingent.  Too expensive, and hopefully your Daemons will be dropping safely behind tanks or battle lines for protection.

Flamers are the new Fiend.

I’d take Soul Grinders over Daemon Princes now, and to say I wasn’t a fan in 5th is an understatement.  The Invulnerable Save is a big reason, but armies in general will probably mount up less – though for the record I disagree with the trend – and Melta weapons aren’t the guarantee they used to be, even without taking into account the increased delivery difficulty.  Probably there will be more Str 7 than 8 weapons, again to the Grinder’s benefit.

The battlefield of 6th is more about massed firepower and devastating, one-off charges.  Daemons aren’t okay with either unless they shore up the numbers.  More troops, bigger troops.  The only unit safe at 5-strong is still the ‘Bearer; methinks Horrors should travel in double the numbers.  Daemonettes are very useful; again, think big numbers.

(As an aside, the Blogosphere has tried to condition you to think MSU is the only viable development strategy.  It must kill you to think of Daemonic Troops numbering more than five Plaguebearers or Horrors – I get it, I’ve been there.

But the paradigm, it has changed.  Troops will be rolling ten-strong, minimum, and in the safety of a vehicle or fixed position.  Again, think firepower.  Think devastating.  Your Troops will have to come big to have an impact.

Pay the tax; support your units with numbers.  Hell, you save on vehicles!)

Bloodletters suck in regular Daemon armies, but have a place in Allied Contingents.  A big place – I think this is where Khorne will excel.

Man, but aren’t Nurglings cute!  And useful!  They’re cheap enough to A) build up your numbers to stack a drop and B) consider throwing them away on the off chance of hiding in your opponent’s backfield.

No so useful are the new Slaaneshi Chariots.  But they’re just incredible..!  Fire magnets.  I want to like them, I really do, but the points investment in these war machines can be pricy for what you get.  Still, if this is a part of your design and you’ve given chunks of your black heart to Slaanesh, I’d make sure to support them with a Keeper of Secrets, the Masque, and a Demon Prince.

(This is another model I suspect would work better as an Ally; in fact, themed Daemonic Allies might have a place, both fluffy and useful!)

Get Pavane working for you!  Speaking of… Pavane plus Breath?  Yes, please!  Breath of Chaos is always useful; it’s just the delivery system that’s changed.  My 5th Edition army used Heralds of Tzeentch on Chariots very aggressively, and to devastating effect.  The same concept applies, but will be a bit trickier to pull off these days.

Don’t dump your Flamers unsupported for an alpha strike against a vehicle or unit, unless that unit is A) unsupported and B) can’t kick your butt in close assault after you fail to kill them all.  Flamers – in fact, much of your army – requires a coordinated assault.

Don’t be afraid to wait a turn; let the tension build and gather your forces in from the Warp.

Heralds in numbers to support the army.  Chariots are out, Disks and Steeds and Juggers are in.  Heralds of Khorne should drop with Flesh Hounds, if you take them; remember, the current hypothesis is Bloodletters are better as Allies.

Heck if I know.  The game hasn’t been out that long, so we’re all still learning.  Still, I have a vision of a unit of Crushers supported by Herald(s) for the Collar and Rending, and maybe to anchor the line during the first wave. We’ll need shooting.  Cheap Tzeenchian Heralds may provide utility, but there’s no getting around it, Flamers and Horrors are in.

In numbers.  And speaking of numbers, how many Screamers are overkill – never mind, I like overkill!

Doh!  We almost forgot about Allies… …or maybe we’ll be covering Allies and Army Lists in Part The Last next week.

That’s it then, general Thoughts?  Comments?  Hugs and Gropings? 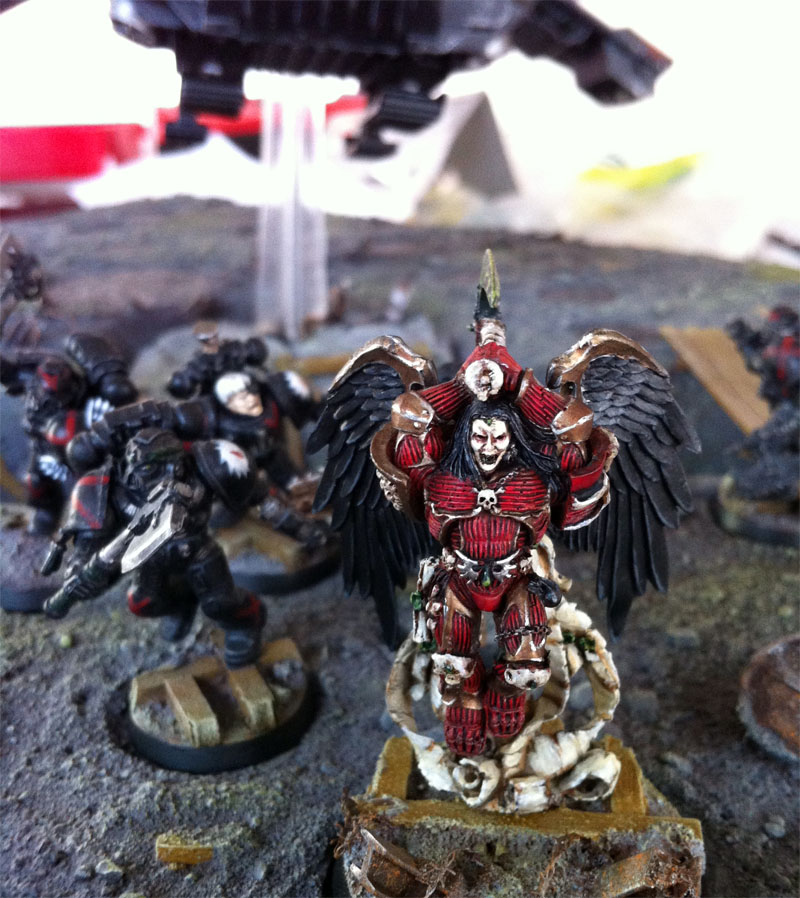