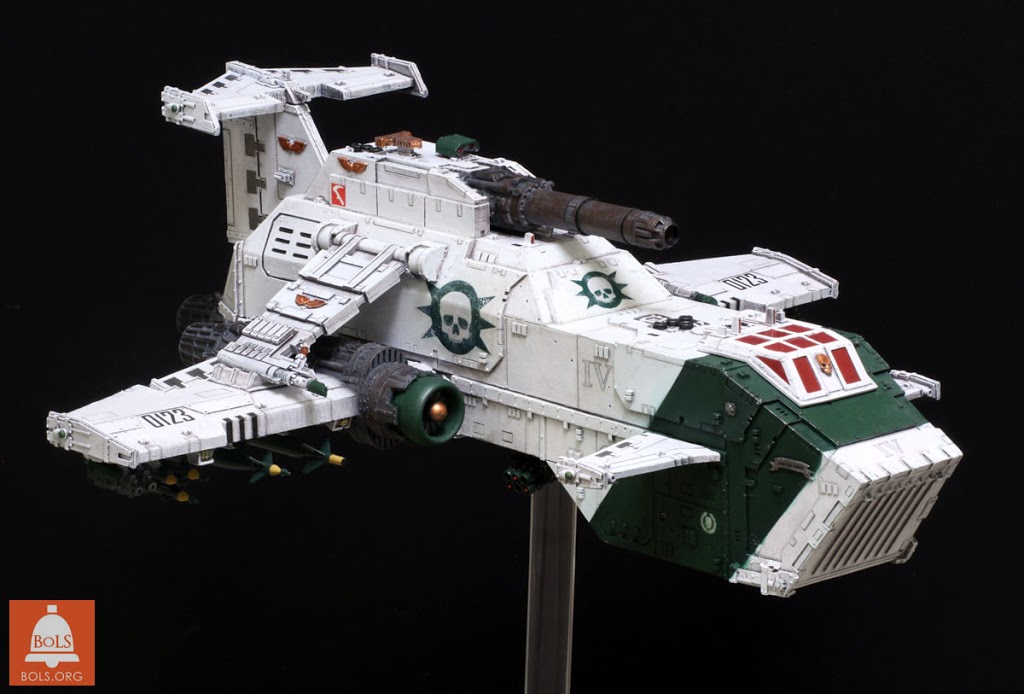 I’ve been wanting something to really stand out as the centerpiece of my Death Guard collection.  Sure, Contemptor Dreadnoughts and even Fellblades are nice, but I wanted something really large and impressive. When I got a chance to get a Thunderhawk on the hobby table, how could I say no. Now this was a third-hand Thunderhawk that had seen some serious neglect over the years. Even with the best simplegreen, and scrubbing, it still had some surface texture and imperfections that wouldn’t come off.  Luckily while it would never “fly” as the transport for a perfectionist legion such as the Emperor’s Children, it would fit right in among the Death Guard.

Now as any hobbist and gamer knows, the key to giving your new model good luck on the battlefield is to give it a good backstory and history.  Here’s my take on the old bird. Justus Mors is an early model Thunderhawk; number 123 off of the first Adeptus Mechanicus foundry line on Mars.  It was only the seventh Thunderhawk to be assigned to the Death Guard Legion in the closing days of the Great Crusade.  Justus Mors was assigned to the 4th Grand Company under command of First Captain Ullis Temeter, who used it is his personal command vehicle after the loss of his command Stormbird during the Jorgall xenocide campaign.

The vehicle is seen here in typical Death Guard livery.  The Thunderhawk’s ramshackle appearance is deceptive, as it is perfect running order despite its heavy wear.  Mortarion regularly chastised officers who spent any time more than necessary to ensure that Legion equipment was combat ready.  Justus Mors bears a green diagonal command stripe on the forward hull and is sporting Temeter’s personal white on red scythe heraldry, as well as a laureled skull indicating the vehicle has carried the Primarch on at least one occasion.

This particular Thunderhawk bears a Turbo-Laser Destructor for ship to ship combat and engaging hardened surface targets.  It has been modified, although it is uncertain if this was a Legion modification or an early variant from the Mechanicus.  In particular, the standard forward chin mounted Heavy Bolter sponsons are absent; replaced with a pair of servo-slaved Havoc Missile batteries in ventral mounts.  This configuration degrades the air-to-air capabilities of the craft, in favor of  increased air to surface capability.  Justus Mors is seen here with a full surface assault weapon loadout, including a variety of guided and unguided bombs mounting chemical warheads.

This particular craft was assimilated into the traitor Death Guard Legion after the virus bombing of Temeter’s Fourth Company on Istvaan III.  There are over two hundred recorded picts and vids of the Justus Mors over the last 10,000 years across the Imperium, in support of various Death Guard Warbands.  Its current whereabouts are unknown. ~Comment away folks.  I’m sure to be rampaging around an Apocalypse table making “whoooosh” sounds as we speak.