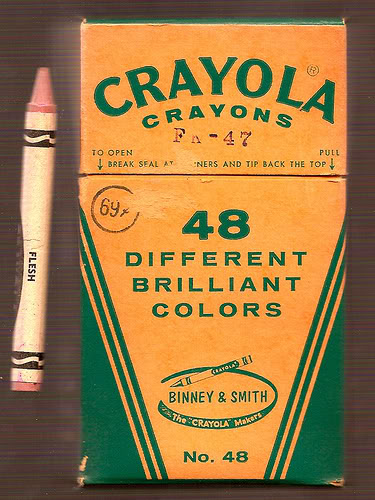 There used to be a Caucasian-colored crayon called ‘Flesh.’  If you’re too young to have heard this little factoid of cultural insensitivity, cheer up!  It’s true… but thankfully changed in 1962.

But if this crayon was a paint, then aren’t way too many of us using it?

Hello again, of Faithful Reader!  Brent here, with a Terrible Tuesday offering that’s – you know – actually on Tuesday.  I’ve let my poor blog languish these past few weeks, but that’s okay.  Most of you aren’t reading it anyway!

But on with the show.

The point is pretty simple; a good chunk of the models in the past were sculpted by pasty white dudes, then evidently painted by pasty white dudes.  In the beginning, it’s like all the armies of the 41st millennium were boringly English.  Not the super-chique Londonesque multiculturalism, but more like an East Anglian tea-cozy blah. I mean, even Vulcan’s Salamanders weren’t properly African!  They were more like bad Dark Elves.  No, no – think D&D, as in the Drow with their jet-black skin.  As if living underground would make you anything but… well, pasty.  (Sidebar:  Except one painted by the talented Jen Haley!)

Bah!  I love me some diversity I do, but in fairness I’m hardly alone.  The very talented sculptors at Games Workshop, then eventually other green-stuff sweatshops, have long since filled the gap with models ranging from historically realistic to realistically-inspired.

Anyway, a few months ago I turned my paintbrush to the task of painting miniatures of different races… though using the steroid junkies from Catachan probably wasn’t the best base for the project.  Still, I needed something uniform with enough different areas of flesh to get the point across.

Turns out, diversity isn’t so easy to paint. I don’t know how successful this was.  Some of the racial backgrounds are easy enough to pick out, but most just blend somewhere into the spectrum.  That’s pretty okay by me, though.  It’s where most of us sit anyway, different shades of you, me, he, and she.

As always though, it’s up to you folks to judge.  How successful was the effort?  Have you tried anything similar, or thought about the subject in the past?  Have you seen other efforts online that you’d care to link to?

If you’re a Blogger and have pictures on your own site pertinant to the article, feel free to drop a link!  And tips are always welcome.

I’ll just leave it with this: we could all shake up our standard ‘skin-color’ recipes from time to time.