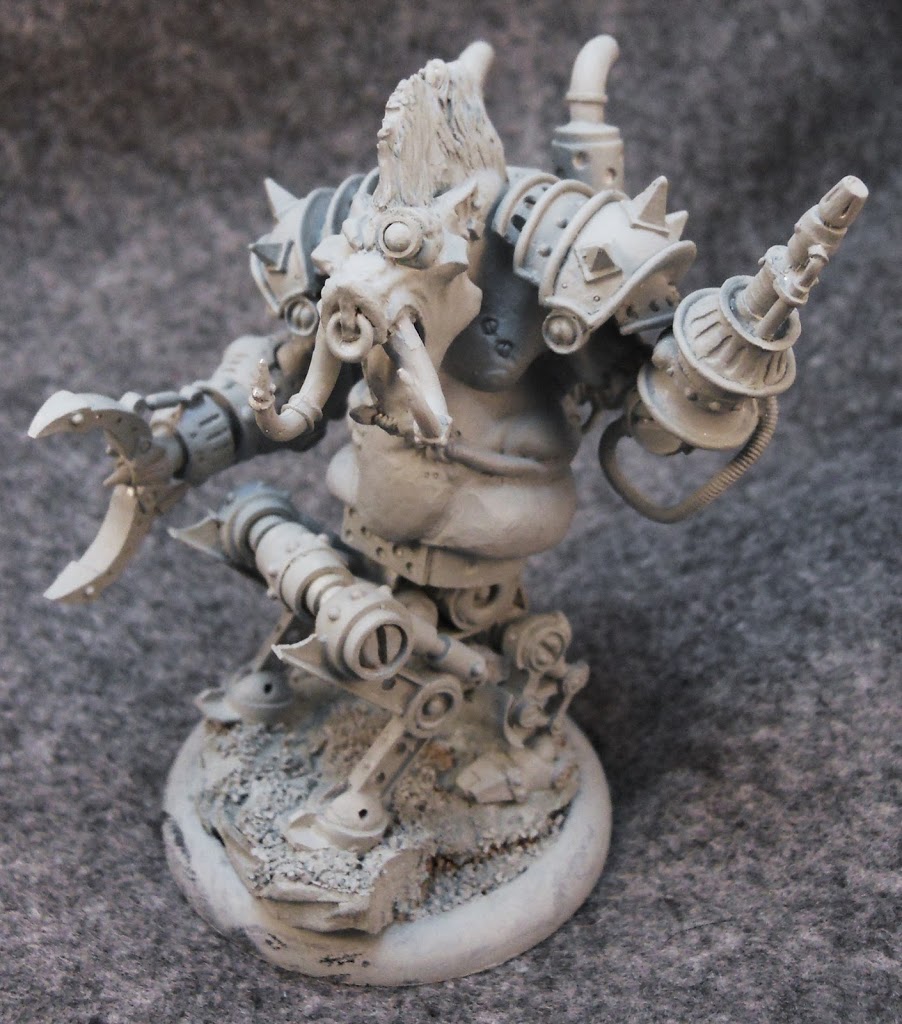 The new Road Hog Farrow Heavy Warbeast released this June.  You know how I love a good conversion.

Despite having wanted to add this beast to my collection since long before then, other projects have kept me from finishing it until quite recently.  Since I wanted at least two of these guys, I knew one of them would have to be a conversion to equal the War Hogs in my collection.  Since this new beast has an emphasis on speed I thought it would be fun to scratch build an extra set of legs for mine and create a quadrupedal monstrosity. Here’s my other Road Hog – the one with no conversion work.  So where did the extra set of legs come from? Well they’re made almost exclusively from different kinds of evergreen strip styrene like this.  All sorts of shapes are available, but the most useful for this project were the tubes, rods, and I-beams. If you pick the sizes of your tubes carefully, you’ll be able to fit them perfectly inside one another.  This can create a much more interesting look for your project. Its best to start a project like this with a pretty clear picture in mind.  Maybe even a sketch.  Once you’ve got a general idea for a shape worked out you can just start going to town.  It can be a real pain to cut a perfectly straight ring from one of the tubes.  I have a small miter box I got from a hobby store that helps keep the cuts straight. I already had a perfectly good pair of legs for the back half, so I figured I’d just use them. I created a bigger piece to join the two sets of legs together in the middle. After some more cutting and chopping I had created something to mount my Road Hog on.  I filled in the open area in the tubes with some gray stuff molded to look like bolts.  In some cases this was done by pressing a tube into the mass of un-cured gray stuff.  For the screw-head type shapes, I had to wait until after the gray stuff had set before cutting away the negative space with a very sharp hobby knife. I embellished it with some rivets from Tichy Train Group.  These things are pretty much invaluable for projects like this.  I discovered them at a local train and model shop awhile back, but they stopped stocking them recently.  Now I have to order them online. I made this ring for the torso to sit on. To get the torso to fit on this ring, I used a jeweler’s saw to remove the legs from the gut.  That was probably the most tedious part of the whole project.  After gluing it in place I had to model on some new flabs of pork fat to create a better join. You probably also noticed the head swap.  I had a couple of War Hog heads left over after my War Hog conversions.  I had to remove a lot of extra neck from the the head before it could be fit to the Road Hog torso.  Fortunately its hollow on the inside so all I needed to work my way down through the neck to the head itself was my pair of clippers and a little care.  With some filing afterwords the new head fit so snugly over the Road Hog neck I didn’t even need to use any putty to mask the seam. Unfortunately I had to remove the mohawk from the head completely since the two didn’t join up.  After sculpting on some goggles, I glued a piece of plasticard to the top of the head to make a base for a new one. Sculpting fur is actually one of the easier things you can do.  All it takes is a little practice. After trimming off the excess greenstuff from the mohawk, I decide to remove one half of the goggles and go with more of a bionic eye look. And here’s one final look at the legs before I base coated them.

~As always, a project like this is about equal parts fun and work.  The payoff at the end is having a cool model that no one else does.  And just in case anyone reading this was curious about another recent project of mine, I got a gold coin for it, but not best.  Still, the coin is a high honor, and I learned a lot during the project I can take with me next year.  Right now I’m hoping to see my Vlad in November’s No Quarter.  Keep an eye out for him!