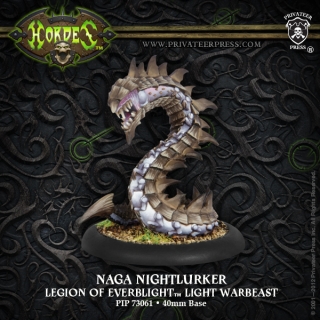 The answer to our prayers!  The solution to dirty, dirty Menoth.  The Naga is here!

As an added bonus my fellow Legion players, it helps against some other problems but really, its Menoth that has always been the issue for us.  Our faction is not a predominately shooting faction like Cygnar or all Melee like Skorne.  We are a mix of both, with potent pieces on either side.  We like our beasts and this one is no exception.

For a light warbeast, this guy brings a lot in a small package. Let’s see what Privateer Press has brought forth:

Animus – (Wraith Bane) Grants Blessed and turns the beasts weapon to magical.  It’s not spam-able like tenacity but with the warlock and succubus to help, you can get it where you need it to.

Stats – Same MAT as our shooting beasts and ties for highest RAT among our beasts.  In a light, this is awesome!  He has about the same health and defensive stats of a Nephilim so not to bad!  Pathfinder and Serpentine is nice abilities for him to have, as is Prowl.

Ranged – A 10 inch, RoF 1 shot with the same pow of a hand cannon.  Against living you gain an additional die.  Also, it’s un-typed magical!

Melee – His bite has crit-Shadowbind.  “Where you going Mr. Stormwall?!”

Do you like to shoot your enemies with dragon fireballs? Do you like to set things on fire with said dragon fire?  For the most part we can do those very things and our enemies hate us for it!  The problem arises when we fight almost any Menoth configuration or buffs from other factions that boost defensive stats into the absurd.

This beast helps so much in that regard that its…well……AWESOME!   Now every time a dirty Menoth player looks at you from across the table and announces, “You can’t shoot my jacks…!”, you can laugh with glee and say, “Well say hello to my little friend!”  The Succubus does well in this situation to spread the Animi love and pass it out to everyone who needs it.  Playing eLylyth against Menoth?  Well that’s both Ravagores and the bolt thrower if cast by the Naga, Succubus and your warlock.  Emmmm, mmm.  Tasty!

The Naga also helps out in other areas though too.  Have you ever been jammed up by an incorporeal unit?  Caught facing Kayazi with Ironflesh?  Stormwall with Arcane Shield?  We now have a weapon against such tactics!

As for the beast himself and his performance on the battlefield.  I have enjoyed him immensely!  For the same cost of a Protector, you get such an amazing light beast.  Need a solo picked off? He can do that.  Need a heavy tied up? He can do that too.  Now his abilities in combat are crit based so it won’t always work out that you walk up to Stormwall, bite his ankle and keep him there.  When it does happen though, it’s hilarious!  Not to mention throwing a monkey wrench in your opponents plan.  Overall, I think this beast is the best thing to come out of Domination for us other than eVayl.  It adds so much to our already impressive line up of tools and just makes them even better.  I look forward to having mine on the table a lot and deriving pleasure from the tears of my enemies!