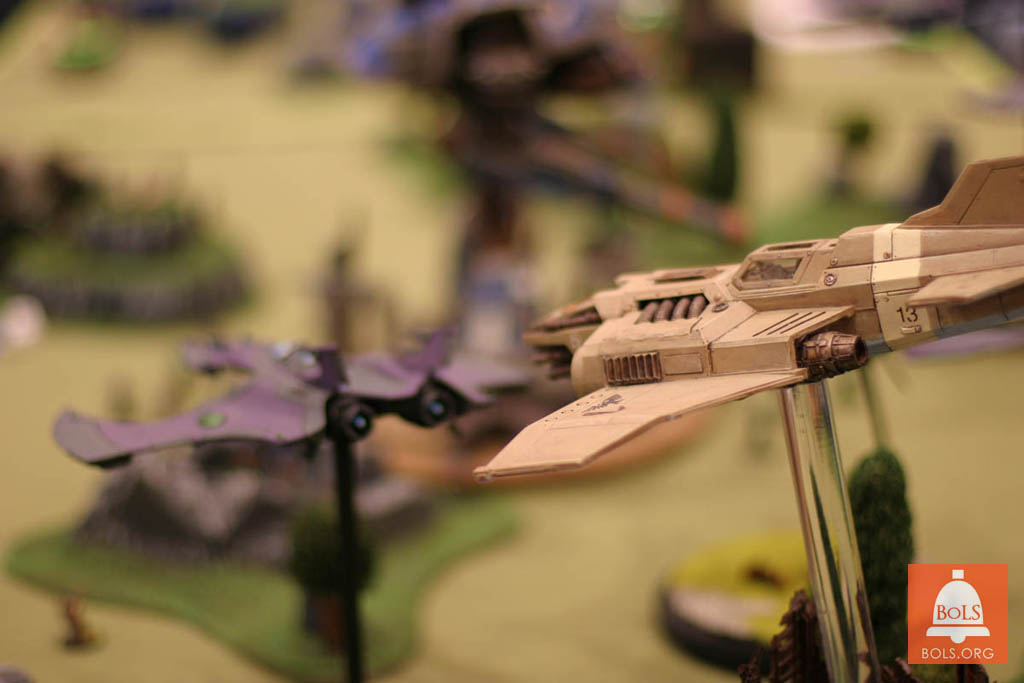 So an interesting rumor about a Dark Angel fighter got me thinking about the roles of flyers in Warhammer 40000.

It’s talked about as a dedicated air to air fighter with very high rate of fire weapons with some type of ability to “lock-on” to enemy flyers and blaze away.

And that got me thinking…

Lets talk about flyers in both 40K and other games as a baseline.  Flames of War is probably the best comparison, as it lacks “heavy bombers” and instead allows players to buy abstracted levels of ground attack strikes.  The more you pay, the more often the airstrikes come in.  As the opposing player, you have four basic choices.

We’ve seen various forms of strike aircraft in the game so far from the Stormtalon, to the Doomscythe who excel at blowing up stuff on the ground, but 40K adds the Helicopter equivalent of the transport aircraft such as the StormRaven, Valkyrie, and the NightScythe.  We don’t seem to have a dedicated air-to-air fighter just yet.

I can imagine the general outlines of such a craft.  With a dedicated air-to-air role, the point cost would need to be low as you taking a gamble of even putting it in your list.  I would design one with AV:10/10/10, Vector Dancer, Interceptor-Skyfire and very high rate of fire medium strength weapons.  In general I would not want to spend points for higher AV values, and low rate of fire high strength weapons would give less reliable results than high rate of fire (more dice to roll) medium strength stuff.  Small numbers (1-4) of air-to-air missiles with a long reach and higher strength might also, help deal with the AV:12 flyers out there.

Considering the gamble of such a weapon platform, I’d want it to be VERY lethal against an enemy flyer once it has one in its crosshairs.  I’d even trade a lower point cost for special rules only allowing snapshots versus ground targets.

My question is would folks even buy it?  People grouse now at the use of flakk missiles as they are expensive, easily sniped by reserving flyers, and not super effective.  If you had a more lethal dedicated air-to-air platform would you even bother adding it to your lists, or just save the points for your ground forces and hope for the best?

I’m torn on the matter.