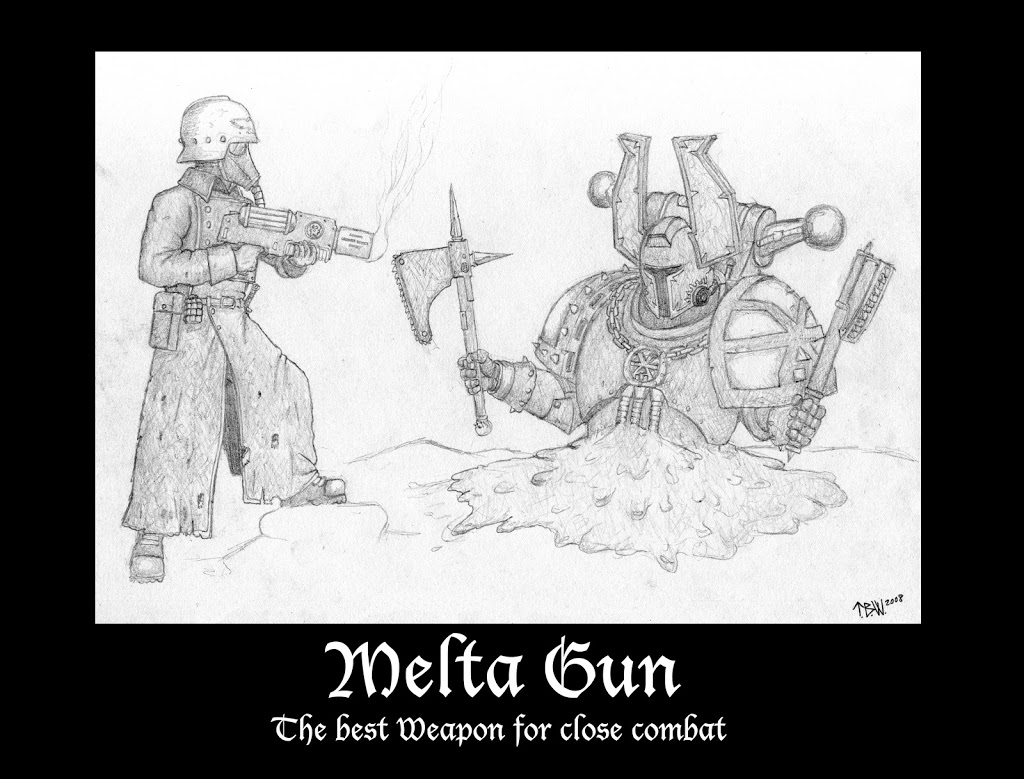 Good day to all, Mercer from Imperius Dominatus here – talking about the lamentable tale of the 6th Edition Meltagun.

Eighteen months ago I wrote this post death of the meltagun. When 5th ed hit the streets people loved melta. They took it so much in their lists that it looked like it was going  out of fashion. I remember seeing a CSM list on a popular blog and is was chock full of melta; nothing else to deal with any other types of armies such as hordes etc. I never understood why you will need a list up to the the rafters with melta. Anyway….

When Melta Ruled the Wasteland
Sure, the melta had a place. Tank destruction was required, at least when 5th appeared on the scene, as AV14 vehicles like Land Raiders, Monoliths and Leman Russ’ were out in force. But as soon as melta appeared, these vehicles would get punk’d and the lists featuring them would decline.

So, rewind 18 months ago when I wrote the above article, and mentioned melta had started to decline. The missile launcher had returned and taken the melta’s throne of anti-tank. While the melta was all about short ranged anti tank destruction, the missile launcher is about reaching out and touching someone and was mostly about suppression. Suppression was a big key back in 5th ed. Also do not forget the missile launcher can dual role with those frag blasts.

Now we are onto 6th ed and things have changed in the anti tank dept thanks to the rules for vehicles. Now vehicles can be destroyed by mere glancing hits. Thanks to this change, the meltagun has nearly died out. Why do you need to roll up and totally destroy something when you can glance the crap out of it from a safe distance?

Sure the meltagun is pretty dangerous now getting +2 on the damage chart, but before you think that makes it better, it actually doesn’t. It’s just the vehicle damage chart has changed and a result of a 4 on the damage chart in 5th and 6th would introduce vehicle destruction. The only difference is exploding results, which will happen in 6th.

Re-enter the trusty missile launcher. It still has the dual purpose of anti infantry and anti vehicle. No longer can it suppress vehicles like before, but this is no fault of the missile launcher, it’s due to the changes of 6th ed. The missile launcher can now blast vehicle to scrap metal easily thanks to multiple glances. I believe a unit of Long Fangs firing four krak missiles would score one glance and one penetrate on a Rhino, leaving it with one hull point remaining. I believe in 5th the Rhino would only be suppressed and probably weapon destroyed. Of course, if I am incorrect then let me know ;).

The plasma gun is now the weapon of choice thanks to rapid fire changes and the updated vehicle damage chart. Now you can move and still fire a 24″ shot with a +1 on the damage chart for AP:2. While the +1 works out to be the same of 5th, it is still better so to speak as anything not AP1 or AP2 is actually worse off when shooting at vehicles.

The beauty of the plasma gun is just like the missile launcher, it can be used for multiple roles; anti infantry and anti vehicle. Though it is slightly better in the anti infantry dept (especially against 2+ armour save) and merely decent against regular transports (the most common vehicles you see). Also, plasma is available in a higher quantity than missile launchers, as pretty much any shooting Space Marine squad can access plasma in numerous forms such as plasma cannon & pistols.

So Long Melta – We Hardly Knew You…
Ending the article, the meltagun I believe is on it’s last legs. It’s so much easier to destroy a vehicle with multiple shots than up close and personal with a single shot. The only time melta is useful is when against high av vehicles, but thanks to melta you do not see them that much. I guess with melta on a decline you may see more av14, then we will come full circle again 😉

Is the meltagun going the way of the dodo and the plasma gun rising like the phoenix?