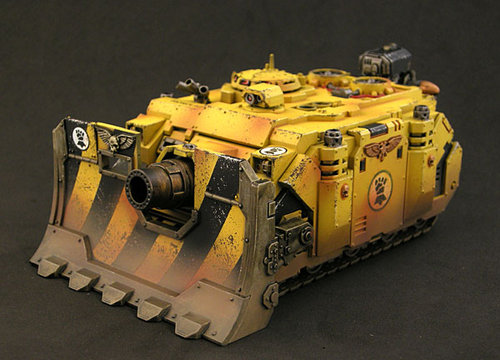 Good day, Mercer from Imperius Dominatus here. Vehicles in 6th ed have taken a, well a change is the best word to use.

For WorseThis rather simple change has effected  vehicles in a big way. The change of course is hull points. Yes, vehicles have changed in other areas, but hull points is the biggy.Previously in 5th it would take a large effort to glance a vehicle to death, most results on a glance would end up causing stunned damage. In 5th ed suppression was the key to stopping vehicles. In 6th suppressing a vehicle is a lot more harder to achieve, thanks to the damage table. But, who cares about suppress when you can take out a vehicle much easier? With hull points you can just glance a vehicle to death, with most vehicles having three hull points, this is pretty simple to do. Queue weight of fire power instead of hardcore armour destruction weapons.It’s worth mentioning that the vehicle damage table has changed also. As any vehicle reduced to zero hull points is wrecked, there’s not a wrecked result on the table. Only a 6+ will total a vehicle.Ok, so I admit that *some vehicles are easier to deal with. No longer does it take like a bazillion damage rolls to tackle a Rhino. I am sure that will please the mech haters and spam Nazi’s.What else has changed for the worse? Well the big one for certain armies i.e Blood Angels, is that you cannot assault from vehicles (ones without assault vehicle rule). This means you have to disembark in the previous turn, hope you do not get shot bits (you can use your own vehicle as a blocker here, though whether it survives is another story) and then assault. To add insult to injury, even if your vehicle is destroyed you cannot assault, you know it is hard climbing out that crater without the vehicle ramp!Speaking of assault, a vehicle is classed as weapon skill 1 if it has moved; this includes at any speeds. Just like before, a stationary vehicle is auto hit.Last one which springs to mind is that the strength for when a vehicle explodes is the same for all vehicles; in 5th and even 4th ed, open topped vehicles only had a S3 internal explosion. Those Dark Elves are not going to like that!That’s really all the bad stuff I can think of. I am sure I’ve probably missed something out, but those are the big significant ones.For Good
It’s not all death and sadness for vehicles. There are good points.While it is easier to destroy a vehicle via glancing hits, the vehicle can protect itself a whole lot easier in the form of cover. Cover saves are more easier to obtain as only 25% of a model needs cover. Don’t forget that cover is based upon the terrain feature (so 3+ for fortification and 4+ for ruins) or a general 5+ if from another unit. This adds a tactical side to movement, making sure you can get the best cover saves and acquire those saves pretty easily.I didn’t mention this in the bad points, but smoke is now only 5+ cover. For Imperial vehicles this is a bummer.Still on the cover subject, skimmers now get jink, which is a 5+ save if they move. Armies like Necrons and Eldar who use mass skimmers never got this benefit before, so a whole much of loveliness for them.Shooting; shooting got a whole lot better for vehicles as they can now move and fire all weapons. Yes, I know that it is only snap fire, but it is better to fire than not firing at all. To make this even sweeter, fast vehicles can move 12″ and fire two weapons.Then you’ve got the passengers inside; ok it’s rubbish that when a vehicle is stunned the passengers cannot shoot, even if they disembark. At least though with shaken results you fire snap shots, something you couldn’t do in the previous rules edition.Then you’ve got speed, the whole point of taking vehicles in the first place and now something they do better. All vehicles can at least move 6″ flat out in the shooting phase. This gives vehicles a total of 18″ movement. Extremely handy in a objective based game. If you’re using a fast vehicle, then you’re moving some serious distances.Going back to the damage table, it’s rare that a vehicle is suppressed now because previously is was glancing hits which caused vehicle suppression. Then the only result to destroy a vehicle on the table is a 6+. While certain AP values get bonus’ i.e melta (which hasn’t really changed btw), anything without a bonus is actually worse off.Final Thoughts
Overall vehicles are slightly worse in 6th ed and that’s because of hull points. The glancing business has made vehicles a lot easier to deal with.Vehicles have gained more over all benefits in this edition, but the big negative out weighs most of those positives.Of course, it does depend what mech list you play; Dark Eldar Venoms and Necron Ghost Arks could be taken down with a single glancing hit thanks to the +1 on the damage table as they are open topped. Now those vehicles only lose a hull point and keep on trucking.Does this mean vehicles should be dropped like a smelly old sock and dumped into the laundry? I don’t think so. Things may need to be adapted and changed. With vehicles so willing to go down, then less of them might be needed and bigger unit sizes to absorb the fire power once those vehicles have been taken care of. Or you could just spam it up more and add even more vehicles and totally swarm the board; you can’t take them all out!I say vehicles in 6th ed are net worse off thanks to hull points. Other minor things do add to their demise. What do you think of vehicles now 6th ed has been out several months – no vehicles, mech swarm, or balanced handful of the metal monsters?