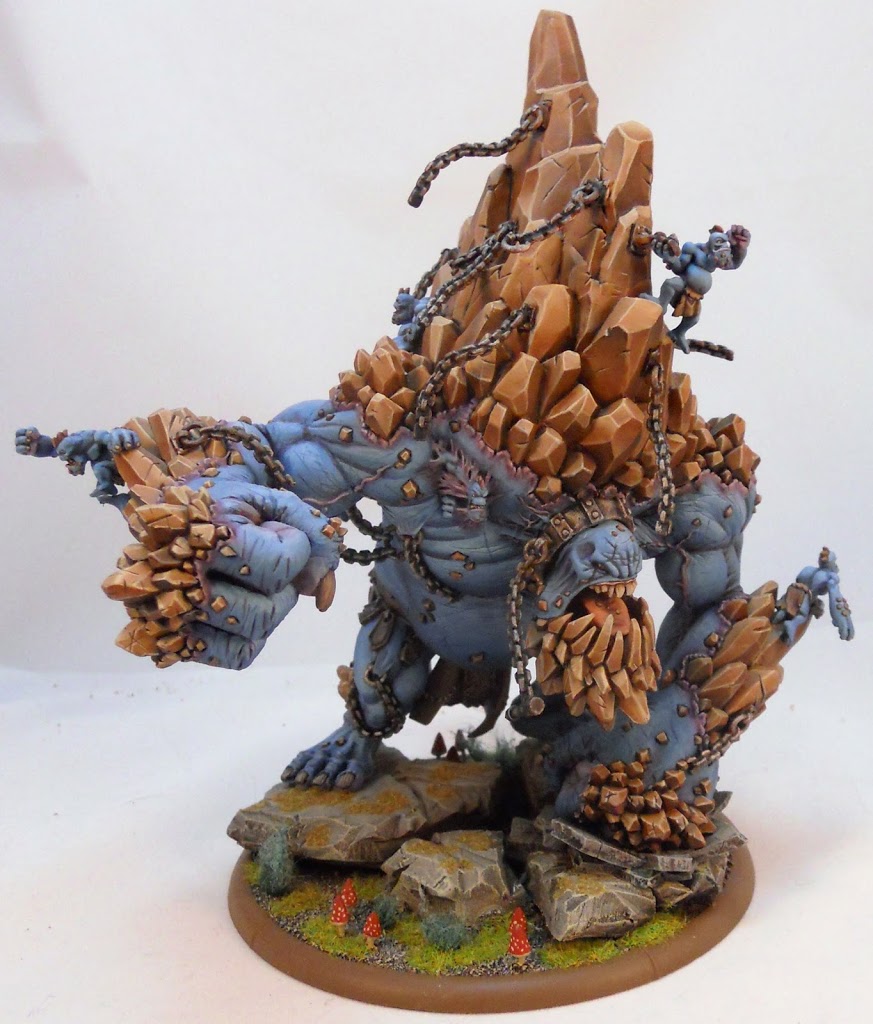 In my nearly 10 years as a Warmachine player I don’t think I’ve ever seen a model elicit as much disappointment as the Trollblood’s new Gargantuan. First impressions are often wrong…
The list of grievances include the beast’s low MAT, RAT, STR – wait…  why am I listing these things?  There doesn’t seem to be much of a point when the King’s many detractors think the guy is lacking in just about every category.  I have to admit, when compared to how overwhelmingly awesome most of the Colossals looked the first time I saw their stats, the Mountain King did seem a bit lacking.  It took awhile, but eventually I overcame this initial knee-jerk reaction and started to warm up to the guy.  Now that I’ve had the chance to take my own King out for a few test drives I’m pretty much convinced that this guy is indeed quite viable.  Here are some things to think about if you’re a Trollblood player on the fence about our new Gargantuan.

The Mountain King is not Stormwall (or Galleon if that’s your poison).  This is really the first thing you have to acknowledge if you’re a Trollblood player feeling wronged by the Mountain King.  Not every faction got a huge based model with such incredible synergies that it fills every gap you thought your faction had and some you didn’t even know about.  That’s right, the Mountain King is not an auto-include.  You will need to construct the right list for him, and when you do you won’t regret it.  But all your old Dire Trolls still have a place in your wargaming future.

48 health boxes is a lot more than it seems.  With 48 boxes the Mountain King is currently the least vital of the pack by a full 8 health.  This deficit is particularly noteworthy because that number essentially amounts to one less solid hit the king can take before going down.  At least that’s how I saw it at first.  My mistake was in immediately looking at what the King is missing; the glass is half empty approach as it were.  Let’s look instead at what he has.  What does 48 health boxes mean in a game of Hordes?  First it’s a great reason to consider fielding the King over a popular alternative.  A lot of comparisons have been made between the King and a Bomber/Earthborn combo since they both weigh in at a hefty 20 points and they’re both great for killing infantry and stomping heavies.  What makes the Mountain King great is that he continues to excel at both functions well after he’s suffered damage that would kill either of the other two.

But what about a wider context?  With ARM 19, assuming average un-boosted rolls, the King’s 48 boxes mean he can expect to survive 11 POW 16 attacks, 9 POW 17 attacks, 7 POW 18 attacks, 6 POW 19 attacks, or 5 POW 20 attacks.  Throw in the Krielstone Bearer aura (really you should always be taking these guys with the king) and those numbers rise to 23 POW 16 attacks, 15 POW 17 attacks, 11 POW 18 attacks, 9 POW 19 attacks, or 7 POW 20 attacks.  Once you have this baseline in mind you can start keeping your eyes peeled wide for anything that offers a real danger to your King.  There are very few models that have such a concentrated threat density.  Even most other Colossals and Gargantuans will need a bond, a strength buff, or some way to buy attacks beyond their fury stat or focus allocation if they want to one-round your king.  And anything that doesn’t will get beaten to a pulp in the following turn after you use those shed whelps to heal this gargantuan back up to fighting strength.  Of course it’s always possible that multiple enemy models will team up to bring down your Mountain King.  And that brings me to my next point.

Trolls have great ways to dictate the flow of battle.  First of all they have great SPD buffs.  If you want to go that route, an eDoomy list with an Axer and Lanyssa Ryssyll can give your Mountain King a 17″ threat on feat turn. Borka and Grim can both do 16″ if similar conditions are met.  This means it’s not hard for your King to get the alpha strike and eliminate or severely cripple the biggest threat to his safety.  With the early loss of a hard-hitting piece, your opponent will find it that much harder for the rest of their army to deal with your gargantuan.  There’s also the fact that the King’s Huge Base is a hidden boon for the alpha striker.  That additional 70 mm of width means the Mountain King can poke over two inches further outside of his warlock’s control area than a large-based model.  This will help prevent the frequent heartbreak of charging a warbeast too far away to force it.  If Alpha striking isn’t your thing, or if you’re up against one of those rare foes with superior speed buffs you can always bring along a nice inexpensive Kriel Warrior tarpit.  These guys can help get in the way of opposing hard hitters to make sure your Mountain King can take them on one at a time.

Kill Shot with a POW 16 Spray is awesome.  In fact it won me my first game with the Mountain King. I got a caster kill with it after my MK pulverized a Warpwolf Stalker.  I’ve also used Kill Shot to eliminate annoying support solos and UAs including, but not limited to, a Blood Hag, a couple of Shifting Stones, Gorman diWulfe, and a Vassal of Menoth.  It’s a great feeling; you’ve just pulverized a swathe of infantry with a sweep attack and then you get to decide how you’re going to place this nice big spray template.  And if you’ve still got Fury left you can buy some more P+S 19 fist attacks against whatever else needs to die.

The Mountain King really only costs 16 points.  Or maybe 18 or maybe 14.  It’s varied from game to game.  But so far my Mountain King has spawned an average 8 whelps per game.  That many whelps would set me back two points if I had to buy them with my army.  Sure I know the whole Whelp Shedding thing is built in to the King’s point cost.  But people seem to underestimate its significance and that is a mistake.  Remember earlier when I said the Mountain King only had 48 health boxes?  Well if you add in the number of points my Mountain King has healed over the course of some games by eating Whelps, that number starts to shoot way up.  Right now my max Whelp healing in a single game topped off at 31 boxes.  This was against a Protectorate range heavy list that peppered the big guy with numerous Redeemer and Repenter shots, a few more painful Reckoner and Vanquisher hits, and of course some low P+S weapon masters charging in to cut chunks off.  The Whelps just kept falling off and healing the big guy so he could spawn more next turn

In a multi-list format bring at least one Mountain King list and at least one list without one.   This is my last point and honestly I think it’s true with most Gargantuans and Colossals.  Just one of these models will drastically alter the nature of the ensuing game.  If your opponent has brought along a list tailored to combat these huge based models, there’s a good chance they’ll bring that list to field even if there’s not a 100% shot they’ll be fighting one.  Assuming you can guess which list it is (hint: it’s probably the one with a lot of high pow attacks) you can respond by deploying whichever of your lists you think will deal with it best; even if it’s not your Mountain King List.

~ So hopefully if you were anti-Mountain King, or just on the fence about the guy, you’ll give him some more consideration in the future. I still have plans for more Mountain King content so expect a batrep before too long, and also a list-building article where I’ll try to go over some more in-faction synergies.