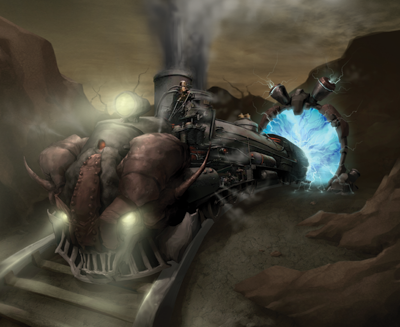 Hi everyone, and welcome to the next part of the Malifaux 101 series, this is the second of three parts looking at the Schemes that you can take in your games of Malifaux, this article will look at the Faction specific schemes, these are schemes that can only be taken by Masters and Henchmen from that specific faction.

First up we have the Guild. Both of their schemes involve minion numbers, both schemes are 1VP if unnanounced and 2VP if announced.

Round Up: If there are no enemy models in play you get VP

Raid: If you have more non-totem minions in play than the opponent you get VP.

Next up the Ressurectionists, their schems do not follow the usual VP pattern. Their schemes are about raising models or having lots of corpse counters present on the table.

Death after Death: If you have more models in play at the end of the game than you started with you get 2VP.

Thirdly the Arcanists, their schemes are movement and interaction based. Which generally suits all of the arcanists other than Rasputina.

Power Ritual: Your models can (1) interact within 6″ of the table corners, if you interact with 3 corners you get 1VP, 4 corners nets you 2VP.

Sabotage: Note a terrain feature on the opponents side of the table, non-insignificant models can (1)nteract with it, if you can interact it and if that model is still in play at the end of the turn you gain 1VP, you get 2VP if you announce the scheme. Next up is the Neverborn. Their schemes are about reclaiming their territory as well as striking fear into the other factions by kidnapping their members.

Kidnap: This scheme is never announced, you secretely note three enemy minions, if 2 are out of play you get 1VP, if all 3 are out of play at the end of the game you get 2VP.

Reclaim Malifaux: This is an interact scheme, you divide the board into 9 equal sections in a 3×3 pattern, your models can (1) interact with a piece of scenery to claim that section, if you get 6 sections claimed you get 1VP, if all 9 are claimed you get 2VP.

Now the Outcasts, their schemes are about gathering supplies as well as denying the enemy their objectives.

Gather Soulstones: If you have more soulstones in your pool than the opponent you get 1VP, if you announce the scheme you get 2VP, this is a good scheme to use the (1) action Drain Souls with your master in the endgame, to sacrifice up to 3 models and gain 1 soulstone for each model sacrificed, it does give a cumulative -1Wp to the entire crew for the rest of the encounter though.

Finally the shiny new Ten Thunders, their schemes are about protecting their reputation as well as maintaining and infiltrating the organisations in Malifaux,

Saving Face: This again must be announed and is about denying both your opponent and yourself maximum VP from your strategies. you get 2VP if both of you score less than 4VP on starategies