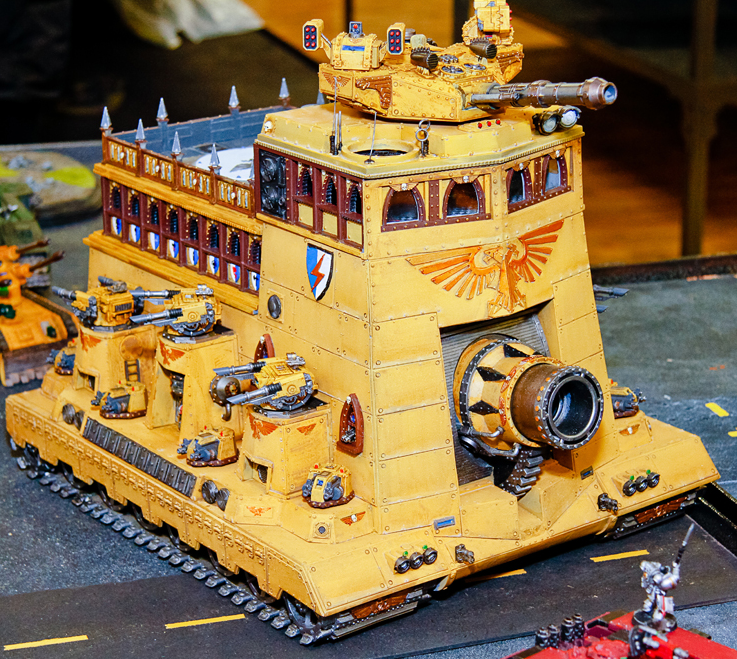 So you are going to step up and play Apocalypse.  What house rules do you need to make the game run smoothly?

Apocalypse is very different from regular 40K.  The Apocalypse Rulebook provides a whole new way to play 40K, by letting players play with a lot of models and introducing new units in the form of Super Heavy Tanks, Super Heavy Walkers (Titans) and Gargantuan creatures.  Because of these new rules, players will find that a set of house rules will be useful to reign in what could be a crazy free for all if not careful.  So, it is important that you agree on what house rules are in force before a game and then let everyone know what those rules are.

Over the past 3 years, since former Los Angeles Games Workshop Bunker manager Chris Cailor and I started SoCal Apocalypse, we have come up with a set of House Rules that is used more or less, by two other Apocalypse groups I play with.  Plus, the Apocalypse40K forum is a great place to discuss rules and what other Apocalypse players from all over the world.

House Rule Suggestions:
What formations or units are banned?  –  The Ork Pulsa Rokkit is generally banned because it slows the game down so much and is a huge pain in the butt!.  We are also playing without Warlord traits now as they lengthen the game. In really big games, the Surgical Strike strategic asset is very time consuming.  Note we eliminate items that slow the game down?
What are scoring units?  –  Per 6th edition rules, only Troops may hold objectives.  But what can contest?  One group I play with only allows troops to contest.  We generally play anything with a WS can contest, as long as it is not a gargantuan Creature or Super Heavy Walker.    You need to decide for your group.  6th edition has different rules for “Denial Units”, but we like to be flexible.
Allies  –  What is acceptable here? We believe that you have to follow the fluff.  So you can’t load that Carnifex in your Land Raider.  We generally follow Forces of Light vs. Forces of Darkness in setting up teams.  And if you want to bring an ally, then we make you bring an HQ and two full troop units minimum.  An ally must be at least 1500 points.  These rules prevent the abuse of just bringing a Hierophant or other powerful unit to bolster your army.

Limit Flank March  –  This is an overpowering Strategic Asset.  The general rule the 3 groups I play with use is that you are limited to 1,000 points for flank march.  Now some datasheets grant this asset to the unit and then we simply say that Flank March is limited to that unit.

Custom units?  –  What do you allow as far as customizations?  The best example of this is the amazing Fellblade customizations by Tom McBride.  Before Forge World came out with their Fellblade, Tom McBride was building his amazing vehicles conversion kits.  We allow the standard datasheets Tom has put together. You can read a great interview with Tom here. And we also allow units from the Bell of Lost Souls Lords of Battle PDF.  This was a great compilation of the units represented by Armorcast models and in Epic.

There are some top level House Rules issues to deal with.  Look for an expanded article with a complete list of House Rules we use in The Big Game, the world’s biggest Apocalypse game and at SoCal Apocalypse.  More information on that can be found on the Apocalypse40K blog.

So, what issues have you found that need House Rules in Apocalypse?