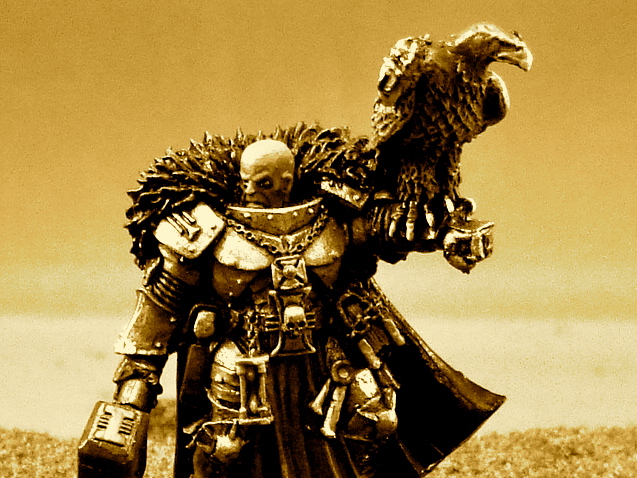 We’re countdown to Christmas, ladies and gentleman, Unicorns and children of all ages – but we’re also approaching the New Year.  It’s time to look back and ask ourselves…

…is 6th Edition a success?
Brent here.  It’s Terrible Tuesday, and sometimes that means asking unanswerable questions.  After all, if you and your mates enjoy the game and play it all night Friday and Saturday – you know, date night – than the answer is, “Yup – it works for me.”
Yeah.
But this doesn’t feel the same as releases past, so I’ve got to open this thing up, stare at the guts, then hope enough of you out there are willing to go through the ever-increasing nonsense necessary to post a comment or three.
(Anyone else noticed the anti-bot measures just keep out everyone else?) Let’s get right to it; it’s a long one, so the faint of heart should just drop out now.
Ol’ Brent has been around since Rogue Trader – and no, I’m not alone in that.  A bunch of you have stuck this mad thing out with me.  Kudos.  Now give it up – does the release of 6th Edition feel like it rides a different momentum?
It could be Warhammer Fantasy’s failure to thrive.  After all, the miniatures are better than ever.  The books have options and the kits are pure win.  More than anything, the scale is epic – simply epic!  No game has or will ever achieve the sheer numbers and diversity of armies capable of swamping a fully realized table.  The game’s vision and setting are far, far better than anything anyone else is doing.
Yeah, that means you, Privateer Press. Warhammer Fantasy can’t help but win!
Except it lost, and almost right out of the gate.  No denying it – it didn’t take canny players long to figure out how broken the magic system is.  The game shifted; I think it is fair to say it isn’t what GW expected – but Storm of Magic doubled down on it.  “We’re not building games for the tournament player,” says they.
Ah, we’re playing to righteous indignation now!  Best drink water with that; it goes down hard.  No matter what the intention was, nobody I know is playing Warhammer Fantasy.  My understanding is numbers in tournament play are down.  It may be different in Europe – I don’t know – but here, Stateside, those players just aren’t there in the same numbers.
They’re playing WarMachine. No!  I’m consistent I am!  Warhammer Fantasy is something special… but WarMachine is fun to play.
“We want players to build a narrative.”
Sound familiar?  That’s one of the things we’re reading online about Warhammer 40K.  It’s all about building a narrative… and you know, it’s one of the things I’m on board with!  My favorite part of 6th is setting up terrain, using the rules as laid out.  It’s great fun, and if you haven’t tried it, please do.  Motivated self interest keeps the terrain fairly balanced, but the boards you end up with aren’t anything like you’d set up yourself for a one off game.  You really can see the narrative come together with the board.
But.
This is the type of article that you just knew had one or two of those, right?
But my gaming group may be one of just a few to play this way.  Most folks I talk or chat with still set up the board in the traditional way of ages past.  And the number of local conventions and house rules are surprising this soon into the game.
I think I’ll come right out and say it straight – people seem to have a problem with this edition.  It’s like they want to love it, but don’t.
They sure change enough of it.
Then there’s this month’s White Dwarf.  Jervis Johnson crawled out of his rules lair (it’s an English rules lair, so I imagine him surrounded by high-back chairs and leather bound volumes – but no electricity, ’cause then it wouldn’t be a lair proper) to make this pronouncement:
“All games require a sort of social contract between the players in order to work.”
Then he talks about playing chess in the right spirit… say what?  You flat missed the mark there, Jervis my man.  There is no miss-measuring the distance the Queen can move.  As long as the players avoid flipping the board, then the hate is all in good fun.  Kasparov was famous for the almost physical pressure he created in his opponents through sheer force of will.
Now, I’m not here to diminish the spirit of what Jervis is saying – he’s right on.  I have no interest in playing some choad whose only goal is winning at the expense of my enjoyment.  So certainly the social contract Jervis spoke of exists, but it changes from environment to environment.
You expect a different experience with your friend at the local game hole than in a decent sized tournament.  There’s nothing wrong with that.
Nor is there anything wrong with tournament play.  It’s the Blogosphere, so we do talk about that maybe a bit too much… but I’m here to tell you tournament play drives the hobby… …flogging it from trend to trend, and inspiring players to finish armies and start new projects.
It’s that impetuous that seems to be drying up.
What has 6th done to stop people from collecting?  What has interrupted the cycle of army inspiration and creation?  On the face of it, 6th seems perfect – after all, allies opens up the game in ways never before considered!
But.
But maybe it was too much, too soon.  It’s being embraced more to plug gaps in a competitive list than to build a new army in the spirit of the game.  That sort of trend will breed resentment.
I think it’s also fair to say GW missed the mark on Flyers.  Yes, they’re a huge success!  I love everything about them – except the lack of balance.  Flyers are too good right now, forcing you to:
Why, oh why, didn’t GW just publish a list of units that can upgrade to Skyfire?
I’ve been running through some problems I see with the 6th Edition release, hoping you, the Faithful Reader, will chime in and help a brother out.  Now, though, I have to consider something I only just touched on before.
Market share.
Games Workshop is the big dog of the miniatures war game hobby… and I love them.  I’ve been trained over the years by the abuse, you see, but now I’m forced to consider the conclusion all this skull-sweat has lead me to… …other games are really competing.
Warhammer Fantasy’s release was a bust, and I think it’s fair to say GW lost players to WarMachine.  I think there something wrong with the way Warhammer 40K’s release is developing among the player base, so what’s a likely outcome?
WarMachine / Hordes is a great game, but there are others on the horizon that look exciting.  And look at what’s already out there, competing for the cash?  DUST springs to mind.  Look at the games in development – Confrontation springs to mind, an old favorite for sure.  And Kingdom Death, Monster, looks amazing.
Those and more.
Still, you know who might be the biggest competition for 40K?
30K.
Bring on Forge World America, please. This was a big, sprawling thought-vomit, so obviously there’s a number of areas to chew on.  What is your thinking about Warhammer’s release; agree or disagree?  Am I way off base to suspect 6th Edition isn’t just sailing along peacefully?
And what about local examples?  What games are being played in your area – what are the trends you see?
And does anyone care to guess my reasons for believing 30K may have tapped into something 40K currently lacks?  You’d get a head start on next week’s article!
So thoughts?  Comments?  Hugs and gropings?