How They See Us – The Internet Discovers Kingdom Death 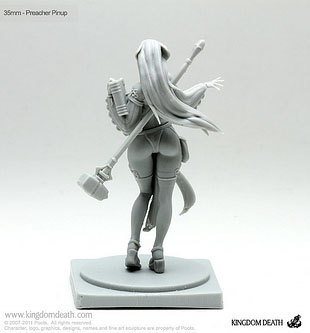 No, we aren’t pigs, and we don’t live in our parent’s basements.  Still, its nice to see the old tropes are alive and well.

Then I started following the links – and then I read this:

I find it disturbing and discouraging that a creative team that clearly prioritizes making quality figurines chose to make those same quality figurines out of astoundingly sexist material. This scale of female sexualization inKingdom Death‘s characterizations outweighs, for me, any other merits this game could have going for it. High production values don’t change that a game with pointedly sexist artistic content was able to raise more than two million dollars to fund its manufacture.

And back we were to square one…

Save vs. Sexism: Kickstarting Sexism with Kingdom Death
BitchMedia

All the standard complaints are there, along with the implied stereotypes and concern-trolling.  In particular I find the closing paragraph to be a bit too tidy by half.

I’d like to see the miniatures market catch up to consumers who don’t want sexist miniatures. I’m also not expecting to see that happen any time soon. The success of Kingdom Death’s funding campaign is a clear reminder that women remain outside the target audience of many game designers. I’ve seen a lot of people already saying “Don’t like it, don’t buy it,” but the vote-with-your-dollars argument is a cheap way to shut down criticism—and neatly sidesteps the fact that sexism continues to be a problem in tabletop games.

If you have an issue with the sexuality, that’s one thing, but it’s a bit too convenient to just brush off the myriad strong counterpoints to one’s arguments with the flick of the wrist. The number of unfounded assumptions in that one paragraph are astounding – almost as astounding as the writer’s lack of understanding of the tabletop wargaming industry as a whole and Kingdom’s Death’s niche place within it. From the lack of concern for women by designers to the implication that KD’s success is evidence that women customers are overtly shunned – the wrongheadedness just keeps heaping errors upon errors.

In the end, these types of arguments have been thrown around at various other industries for decades – from Hollywood to hunting. Perhaps having them hurled at wargaming is a sign that we merit the attention these days – and THAT indeed makes my rosy about the hobby’s sunny future.