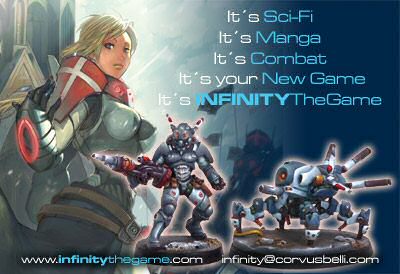 Howdy everyone!  Andyman here to tell you about Infinity: the game.   This is an interactive miniatures game set in Earth’s future about 200 years.  Old governments have fallen away and others have combined to become the dominant power.
Unlike other games, Infinity uses a unique rule that allows players to immediately react to their opponent’s moves as they occur.  It is called the Automatic Reaction Order.  As your opponent activates their model during their turn if one of your models has LOS to it, your model may react in a few ways.  Your model’s actions then might influence your opponent’s actions.  In this way you don’t just sit back and watch your opponent kill your army while all you do is roll saves.
(Brief) Background:
Humanity has advanced into their future and are now exploring other reaches of the solar system.  Despite a setback in the early 21st century, new planets are colonized and humanity is connected together like never before.  Collectively called the Human Sphere, humanity is guided and protected by an artificial intelligent named Aleph.  Communications, economics, homes, and everything else is overseen or driven by Aleph.  Much like the internet today, Earth would completely collapse if Aleph were to go away.

Human nature hasn’t changed and so there are factions attempting to become the dominant power through war, money, and technology.  While the acting government, named O-12, attempts to act as a world government, even they sometimes stand powerless as the Yu Jing and Pan Oceania strive for power.  Recently humanity has encountered the alien race they have called the Combined Army.  These new aliens want nothing more than to subvert humanity to their whims and yet the Human Sphere seems unable to join together for a common defense.  A new hope may lie with a second alien species named the Tohaa but only time will tell… Which faction deserves the galaxy?