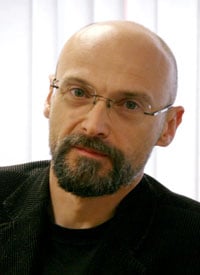 Rick Priestley continues his interview on  game design and his his new game – Beyond The Gates of Antares (GoA).

In Part One Rick Priestley talked about his new Kickstarter to support his new game – Beyond The Gates of Antares (GoA). This time he talks about games, designers and games design.

How did you first get started with formal tabletop game design?

‘Formal’ design – now there’s a thing! Well I’ve always designed games as long as I can remember, and wargames with models since I first discovered what those were when I was 11 or 12, whilst my first published game was Reaper (Fantasy Battles) when I would be 18 I think. So quite how I got started is lost in the mists of time. Perhaps it’s genetic!

Can you talk a little about the challenges and differences in designing for venerable existing game franchises versus fresh new systems?

Yes I don’t think of supplements and new editions as ‘games design’ at all really – more a question of ‘development’. Games develop naturally within the playing community over time, and so long as you understand the basic design parameters of the original work it doesn’t take a great deal to either update a game or produce a supplement. Designing something genuinely new… that’s another matter… involving a great deal of banging your head against the wall and sleep-shattered nights and fingers worn to the bones typing… always typing… typing…that is your essential difference.

Do you first approach a game system from the rules point of view, the miniatures, or something else altogether?

It can be any of those to be honest and there is no method that works better than another – sometimes it’s liberating to have a free hand from the start, but often it’s the models or background that inspire one approach over another. What are your leading design mantras when approaching a project?

What are the leading pitfalls you see with new fledgling designers – and following up what issues did you personally have the hardest time working through when you first started designing?

That’s relatively easy to answer because all, all, all inexperienced designers overcomplicate things – too many layers of mechanic, too many modifiers, too much of most things, and all you do is confuse the design. One idea expressed strongly is enough. That’s the most important lesson to learn really – keep things clean.

What is the most beautiful game-mechanic you have put into a system that you are most proud of?

Gosh I don’t know – that’s an odd one – that’s like asking a poet what is his favourite rhyme! Although it wasn’t mine, I really do like the Bolt Action order dice mechanic – that is a sweet combination of clarity, function and utility – not me though – Alessio Cavatore!

What is the most challenging ruleset or army book you have ever worked on and why?

They’re all challenging in their way – in the early days I did get handed a few ‘rescue projects’ that I had to sort out and re-do. That’s a bit like unpicking a woollen jumper and having to reknit it all over – not much fun and the result is never as good as if you’d done it all from scratch. Realm of Chaos The Lost and the Damned was one of those… though I think the end result was pretty good all things considering.

What is your favourite miniatures game (or edition) judged solely by the ruleset – why?

Oh I don’t know – you try not to have favourites. Whatever you are playing at the time really. For a long while I would have said Warmaster – but since leaving GW I’ve had to develop other systems and I haven’t had much time to play. More recently Black Powder and Bolt Action perhaps. I don’t really play games I haven’t designed much – I was impressed by Wings of War when that came out – still have quite a bit of kit for that!

What famous rulesets do you look to for inspiration?

I don’t! I find inspiration in talking to other games designers – guys like Jervis Johnson have a head full of ideas and can turn your thought about a game round in a few minutes!

How does a designer know when a system is done?

Because you design to a deadline! Well I won’t claim to always hit deadlines – but I’d say I’m better than most, having been tied to GW’s ferocious deadlines for most of my career. If you don’t have a deadline you will never finish.

It is often said that there is no “correct” rule design for a particular design challenge. That an infinite number of rule mechanics can be produced that lie along the dueling spectrums of realistic-abstract, and faster-to-slower to resolve, and detailed-to-macro in scope. Can you give us a sense of where you like to design within that framework and why?

I guess that’s more or less true otherwise they’d be one perfect rules set and we could all give up the quest! But I can design anywhere within those parameters really – those are all different types of game – a good designer should be able to do all of that really. For various reasons I’ve tended to end up designing games for ‘armies’ – which suggests an intermediate level for all those things – but I’ve written RPGs too which are at the detailed, slow detailed end of affairs.

Following up, how does one define “fun” as a designer, and how would you recognize or test for it in early drafts of rules?

Bryan Ansell – who owned Citadel when I joined GW in the early 80’s – forbade us ever to mention the word fun in connection with games – they could be challenging, enthralling, captivating, and entertaining even… but never fun. Fun was reserved for circus clowns and practical jokes involving whoopee cushions. I merely pass on this piece of wisdom.

It is a truism that players will always complain about any single ruleset, due to its size and complexity. How does a designer draw the line between “background noise” grousing, versus the possibility that something is truly amiss based on player feedback?

Well there’s another thing to remember – even if there is a glitch in a set of rules you can’t always do anything about it. So, whilst I’m always open to comment, I don’t worry too much about what I can’t do anything about. Life is too short. A lot of that background noise comes from folks who just don’t like your game for whatever reason. There is no point in listening to them. I design games for people who like my games and primarily for me! If you start messing with a game to please the folks who don’t like it anyway you get into a very, very sticky place that in the end will make everyone unhappy (and also sticky).

What are the core responsibilities a player should bring to the table, without which there can be no effective game-design?

Beer. That was easy:)

OK there is something other than beer – and that is simply a willingness to treat all ideas and all suggestions in a cold, dispassionate way, regardless of whose ideas and suggestions they are. Some people do find ideas mesmerising and can’t easily think beyond them once they have lodged inside their heads. You have to be cold. Jervis Johnson always says, ‘find the thing you like best… the clever mechanic.. the bit of colourful writing.. and throw it out immediately! Murder your darlings! Those are the things that will trip you up if you let them!’.

Tabletop games evolve alongside societies like all other endeavors. Is there a single rule-mechanic or concept in any major tabletop wargame that you think was truly revolutionary, bring the industry as a whole forward? What was it and why?

I don’t know really – most ideas cycle round accordng to the whims of fashion – it’s individual unit activation at the moment for various reasons. I’ve read that the Wargames Research Group reaction test was one such eureka moment – probably the first morale system that wasn’t just a single dice roll to run.

Finally, a thought experiment for the readers to get inside the head of a wargame designer. Lets take one of the most simple design concepts seen in almost any game system – a machine attempting to traverse an area of dense terrain. Can you give us 3 quick mental notes of what a rule mechanic that is “too hot, too cold”, and “just right” might look like.

Roll random distance – easy to resolve, introduces player interaction, little if any dissonance – fixed to dice, luck prone, oppressive if table all dense, and harder to balance than above.

You can find out more here – www.darkspacecorp.com and pledge your Kickstarter support here:

Beyond the Gates of Antares
Kickstarter

We’d like to thank Mr. Priestley for taking the time to talk with the BoLS community. Have at it, and feel free to compare and contrast Rick’s and  Alessio Cavatore’s design questionaire here and here for even more fun!