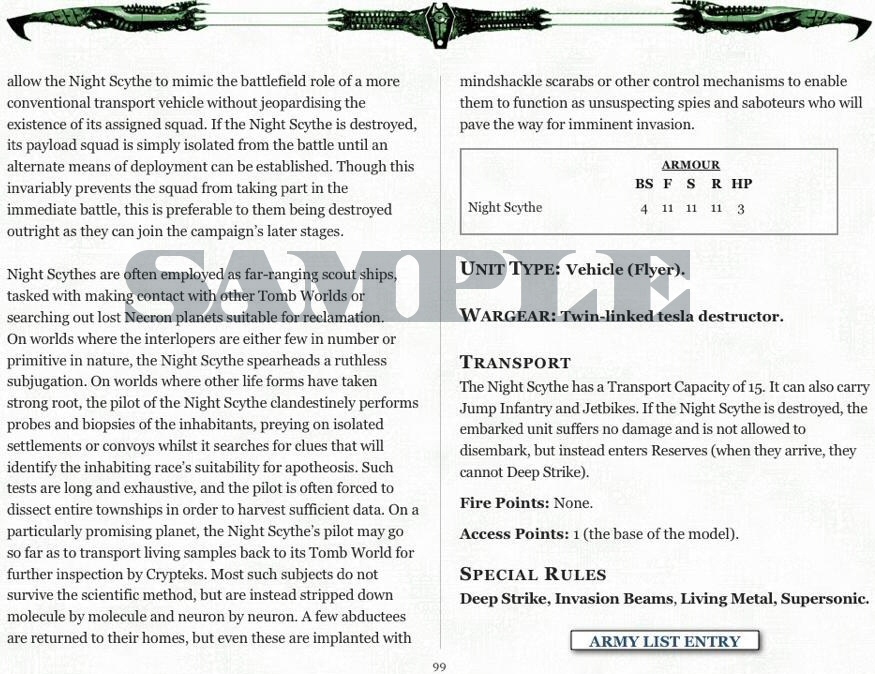 Games Workshop have released an update for the iPad (and followed up with proper FAQs a day later) version of the Necron codex that finally clarifies the rules for what happens to the transported unit when a Night Scythe is destroyed.

“If the Night Scythe is destroyed, the embarked unit suffers no damage and is not allowed to disembark, but instead enters Reserves (when they arrive, they cannot Deep Strike).”

This is good news because this has been a point of contention amongst players and has caused more than its fair share of debates on forums, so even if the answer isn’t your preferred one please appreciate its new clarity.

As discussed previously on 3++, a number of Tournament Organisers had resorted to event FAQs to handle this interaction and avoid conflicts, but the simple sentence above is enough to end pages of arguments and rule comparisons. Expect to see this as part of a new codex FAQ soon. So, how do you think this affects the game? Will confirmation of the invulnerability of transported Necron units boost the power of this top-notch codex even further, or is it merely enough to keep them competitive now Flak-missiles have started to appear? Would you agree it really couldn’t have happened to a nicer codex? 😀

It’s great that Games Workshop now has a perfect avenue to update these rules but they had better make sure those rules are updated on their FAQ/errata documents as well. If they don’t…typical GW. But let’s hope they use this avenue for other things and do so quickly rather than taking half an edition to it *looks at Dark Angels and Black Templars for 5th*.

So – what does this mean? I’m seeing a lot of people act as though this 100% slaps Necrons as being sent back to the table edge is a terrible disadvantage. It’s not really – remember, objectives can now be placed within 6″ of a table edge so as long as it wasn’t the bottom of the last turn your Night Scythe was destroyed on, that unit can and will come onto an objective at the least. This frees up your other units not in Night Scythes to push forward more as you know if those Night Scythes ever drop, the unit will just walk right back onto the table edge.

At the same time, if those Night Scythes don’t drop, please place your infantry wherever you like (essentially) because Invasion Beams are just rude. This basically gives you the same flexibility in terms of placing units on objectives as well. i.e. – unparalleled.

This works just as well in Kill Point games as the small units are being sent far away from the opponent and into hiding rather than mostly burning up a crashing ruin and being easy meat for the opponent to finish off. There are certainly times when you’d wish your unit wouldn’t be sent back to reserves but would rather have them drop (perfectly unharmed) where the transport used to be. Unfortunately, as much as Necrons are trying to both bake and eat the cake, you can’t have the damn icing either!

Overall, – it’s nice to see this issue resolved by Games Workshop; regardless of how or what way they did it. Hopefully they will continue with this throughout their books and in a more timely manner (there have been reports of several other changes in the eBooks such as Plague Zombies for Chaos Space Marines, etc.).

Which leads us to…the new FAQs. Several updates for bad typing on Games Workshop’s behalf and some more edits will need to be done in the actual FAQs, which is of course embarassing but the company already has egg on its face ^^.

So the big change outside of the Necron Night Scythe (which can now carry INFANTRY – thanks Games Workshop) really is the introduction of shooting kill zones again but it’s worded so poorly it can be got around. The way works is like so:

If when shooting, all of the wounds are inflicted by ranged weapons which cannot reach some of the squad members, those squad members cannot die (even if there are wounds in the wound pool left) but if just ONE weapon fires which can reach those models, all models can die. So I can rapid fire one million bolters from a single squad into the single guy in range of a squad of 50 and have one lascannon shooting and all of those bolter wounds can inflict damage up to 48″ away on that squad of 50 guys (if they are strung out that far).

This does two things. First, it makes medium to shorter ranged anti-infantry weapons need to get closer to actually kill off squads. Second, and this is if they don’t fix up their horrible wording of the ruling, long ranged weapons have increased added value in a very… odd way. But screw it, It’s Cinematic!

There are also some nice clarifications like where Dreadnoughts are hit with the flyer exploding damage if it were zooming, Blastermasters per five guys for Noise Marines, turret weapon mount for Heldrake, 6″ disembark for Tyranid spores, and so on and so forth. Some nice questions answered but a lot more still to go….

So what’s your take on the Night Scythe and Necrons now (and the other changes) everybody?