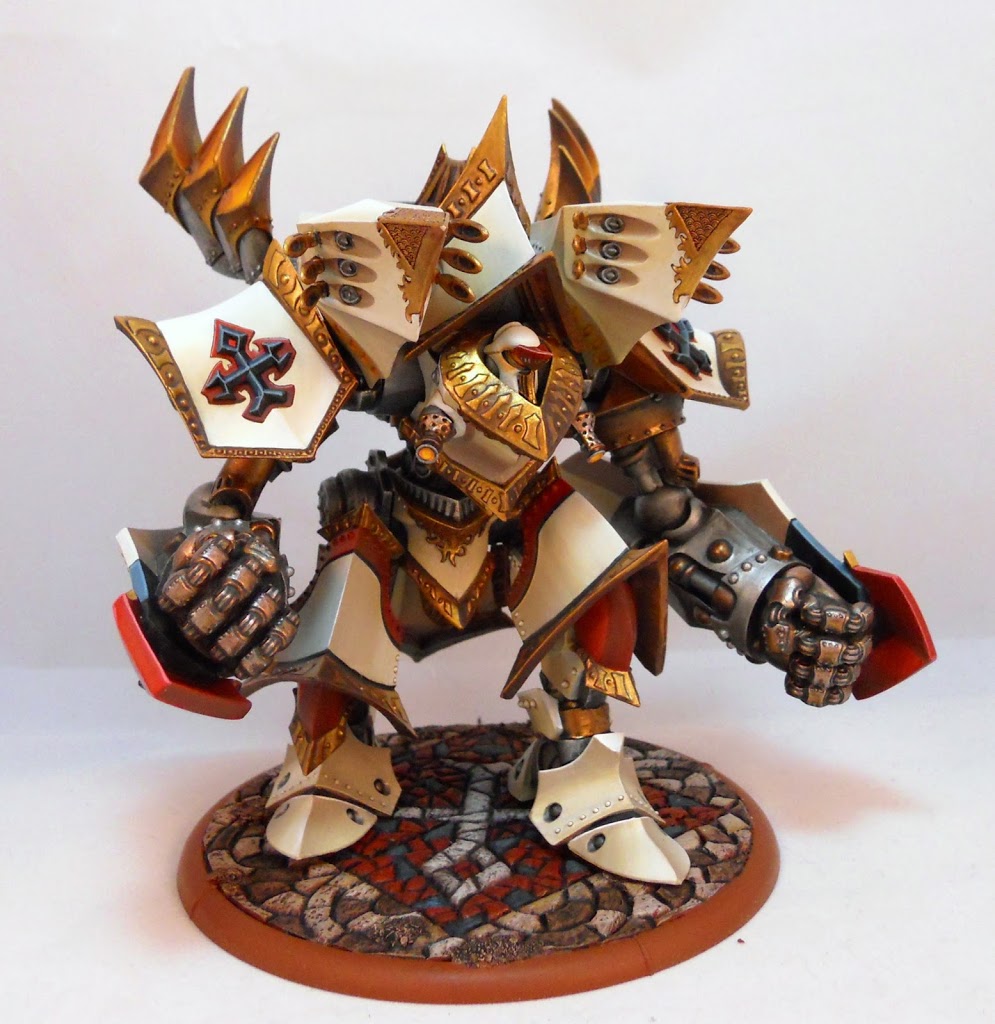 When my fellow gamers at the LGS gather round to talk about Colossals, the Judicator doesn’t come up that often.  Lets put an end to that.

The scuttlebutt usually centers around the insane combos you can put together for Stormwalls or Galleons. Less frequent are discussions on the right caster for Hyperion or Conquest. Then there are still the occasional holdouts who want to re-hash their “Kraken: good or no good?” arguments.  So why is the Judicator the colossal no one’s talking about? Well it just isn’t really that much fun to carry on about something that’s… actually quite balanced.  Don’t get me wrong, this guy has his share of cool tricks.  But “cool tricks” just don’t get the tongue wagging quite like two ARM 24 Galleons or two ARM 22 Stormwalls that you probably won’t ever get to charge.  At the same time there’s nothing really bad about the Judicator – no grievous injustices in its rules for you to howl and gnash your teeth over. But hey, this is the Protectorate we’re talking about!  When it comes to the Protectorate and warjacks it doesn’t take long before “balanced” starts straying over into awesome.

As a warjack the Judicator has access to the vast array of buffs the Protectorate is famous for.  You have the Choir for accuracy and hitting power, the Vassal to give the guy an extra attack, and various spells and feats to make him even more destructive. Like all Colossals the Judicator has some cool ranged weapons at its disposal.  Its twin rocket pods and flamethrowers can cut through swathes of infantry. And with hymn of battle their POW is high enough that they can reliably hurt armored targets if you boost.  Because the Vassal’s Ancillary Attack ability happens outside the Judicator’s activation, this Colossal is one of the few that can make ranged and melee attacks in the same turn.  Activate the Vassal first to give the Judicator a free Flamethrower attack and let him help clear out charge lanes for himself.  What other Colossal can do that?

Of course like all Colossals, this guy really thrives in melee.  When you apply the Choir bonuses I just mentioned to the Judicator’s P+S 20 fists you get one of the hardest hitting models in the game.  But even swinging at P+S 22, an extra attack from the Vassal is still going to matter when you have to chew through the 56+ damage boxes of an enemy Colossal.  Other factions need a bond or (if they’re lucky) a spell to generate anything more than 5 colossal attacks in melee. With the 6 P+S 22 attacks your Judicator can dish out, you should be able to reliably one-round a completely undamaged Stormwall, Galleon, Kraken, or even another Judicator.  And you can do this with any Protectorate caster.  A Hyperion or Conquest will prove to be tougher prey, but their defense scores are low enough that a few boosted Rocket Pod attacks early on should be able to help knock some preliminary chunks out of them… with some Hymn of Battle help of course.  But if you really want to be sure, bring along a caster with Ignite – or even a Bond of their own.

If the raw destructive power of the Judicator isn’t enough for you, it’s also really hard to kill.  Of course this is true of any Colossal, but it’s still worth taking the time to examine just what the Judicator’s ARM 19 and 60 hit boxes mean.  Just in case you weren’t paying attention I’ll repeat myself:  it will take 6 P+S 22 hits to reliably kill a Judicator in a single exchange, and that’s assuming you roll exactly average.  That’s the same as 10 P+S 18 attacks, 9 P+S 19 attacks, or 8 P+S 20 attacks. And whoever you’re fighting is going to have to be able to bring your big guy down in a single exchange since your Choir and their Hymn of Passage mean your Judicator is unlikely to take any damage from shooting before your models get into the thick of it. This is an edge the Judicator has over every other Colossal.

Not many models can pour it on quite that thick.  Even Mulg or a Mountain King will need an animus to dish out that kind of damage.  Conquest can do it, but it will need a bond or possibly Signs and Portents to get there.  There’s also the Kraken… with the right amount of corpse tokens and damage enhancing spells.  And of course the Mammoth will always be a holy terror.  But what you’re really going to want to worry about is the fact that all these models can out-threat the Judicator.  Even when you take it with one of the few Protectorate warcasters that can get its SPD up to 6.  Yep, that’s the big weakness for the Judicator: It’s slow.  So how do you deal?  One obvious solution is to increase its ARM by fielding it with one of the many Protectorate warcasters with a spell that puts +2 on that stat. Sure, it might seem meager when compared to the +3, +5 or even +8 (for one turn) offerings from other factions.  But think about how that +2 adds up over multiple rounds.  The math is simple: its just 2 x the number of attacks.  So if your Judicator takes four hits, it will suffer 8 less damage; twelve hits and it will suffer 24 less damage.  What does this really mean in game terms?  It means that even that Skorne player with his Mammoth and Pain Givers had better hope he has a Willbreaker around for Ancillary attack if he wants to be completely sure he can one-round your Judicator.  And you have Rocket Pods… Rocket Pods you can shoot three of per turn to make sure important support pieces like that are good and dead.

Of course if allowing the most expensive model you can field to be charged by anything that dangerous sounds foolhardy to you then you’re in no way off base. Your opponent won’t need too much extra luck for you to end up with a dead Judicator on your hands when average rolls would have meant it survived.  Even if it does survive, you’ll still need a couple of mechanics on hand to get it back to fighting strength.  Fortunately the Protectorate has another great tool to help keep your Judicator alive: some phenomenal tarpit units.  If you need a hard-to-kill mob of warm bodies to stand between your Colossal and the big scary thing that wants to kill it then you’re playing the right faction. Exemplar Errants are fantastic for blocking charge lanes since their Self Sacrifice ability can help make sure the ones in the right place are the ones that survive.  Bastions also excel at getting in the way.  Then there are Zealots, who can be completely unkillable for a round and Temple Flameguard who can also prove difficult to eliminate.  The Protectorate can even take a mean Sea Dog module with attendant Priests keeping them from being targeted by magic on top of  their 4+ tough rolls and whatever defensive buff spell you want to put on them.  Your opponent will have a hard time getting the drop on your Judicator when he has to chew through units like these before he can get to it.

~Hopefully some of this stuff will come in handy for anyone about to put a Judicator on the field for the first time.  I’d also love to hear any tips I might have missed.  And if you want to brag about any Judicator success stories bring it on.  Next up for the Judicator: list building.