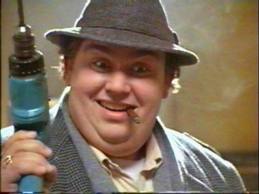 Goatboy is back with a brand new invention.  Today I want to try and get the ultimate bad touch uncle – Fabius Bile to work on the tabletop.

I have always had a special place for this HQ option as he does a lot of interesting things. I don’t know how good he actually is but in the landscape of 6th edition he might actually make for an effective army.

Let’s look at what the creepy uncle does for your army.  He activates one enhanced unit of Chaos Space Marines with his magical cocktail of Koolaid and Sweet Rum.  This enhanced unit gains +1 strength and fearless for the whopping sum of 0 points.  This free activation is interesting as it helps dump the inherent weakness of the CSM (scaredy pants) and lets you create a central unit that will take awhile to fully remove.  You can mix this with Marks and other options and create a scoring “deathstar” like unit that can number up to 20 models and cause headaches. I plan on making mine out of the Forsaken bits and whatever nonsense I find in my bits boxes in the coming week.

Now I know what you are saying – 165 points is the tax you are paying for this upgraded unit.  Fabius Bile does bring more then the free upgrade.  He has some nifty rules as well that make him a good base holding character.  He is fearless and he doesn’t have a locked in warlord trait.  He also is “immune” to powerfist instant death and (my bad he was T5 last edition) has a large number of attacks that could kill multiwound models if they fail an armor save.  Yes I know he isn’t a Chaos Lord bad ass but he still gets the job done for you as a utility character.

So let’s start with him as the beginning with a basic set of troops plus Bile to create the initial push of the army build.

This gives you 725pts and depending on where you want to go – you can start to fill out the rest of the army. The idea to make them Slaanesh is to ensure you get some kind of save from the Dragon.  You could take a Chaos Lord and activate another troop option.  This would allow you to take another CSM squad and attach the lord to it to create another fearless option.  You could also look at a Sorcerer to add to the CSM unit and add on some magical spells as well.  A bunch of Invisible marines is pretty interesting and would create a very tough central unit to crack. Lately I have enjoyed using Chaos Lords as little bits of death in the army and I have found the Mark of Khorne lord on a Juggernaut to be an excellent murder machine.  Let’s look at adding him with another unit of Chaos Space marines to help keep him from getting shot to pieces.

Right now our total is at 1280pts.  We have room for some Dragons and I think they can help out a lot.  We still need some Anti Vehicle firepower as well.

This leaves us at 1620 right now.  I know that a lot of people are thinking I should run 2 bale flamers.  It is a good idea but lately I have wanted some Anti vehicle firepower in the face of the armor 13 wall Necrons.  Getting a chance to fly over and shoot some Strength 8 shots out the Dragons butt is pretty effective in removing those annoying options.  It might be better in the long run to take a flamer but at least having the option might be a lot more interesting to play with. From here I need some Anti tank options and the cheap Havocs are not a bad choice.  The Cultists will keep them bubble wrapped with a fearless character to help let them stay there.

Here is the list for those who just want to yell at me in the end.

Is this army going to crush everyone?  Probably not but it would give you a good game most of the time.  You only have one real worry for First Blood with the Havocs so you could look at dropping them for something else. You could look at making the MoK unit of CSM 15 and save some points for more Havocs if you are worry about too much flyer spam.   This list has a lot of bodies and it will take awhile to remove them.  The biggest pain in the butt is having to paint 40+ marines with a set of 35 cultists. Have you had luck with some of the so called lackluster CSM characters?  I have thought about trying to use Huron next but it will take some work to get the infiltrate power to work correctly.