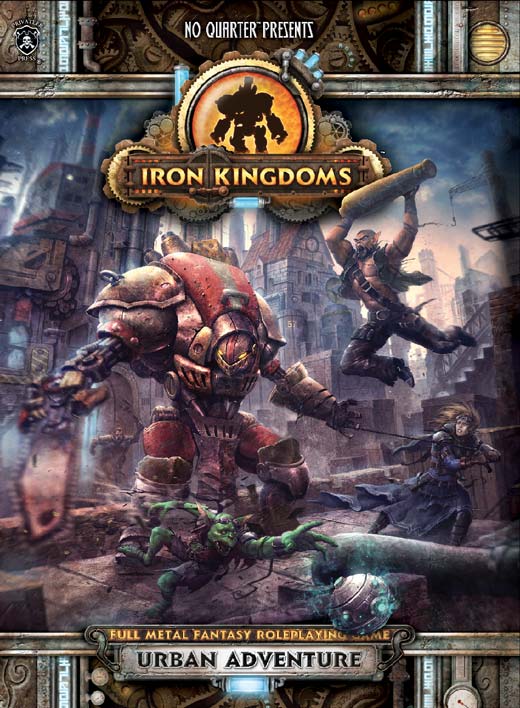 The new Iron Kingdoms Roleplaying Game Supplement, Urban Adventure, has hit the shelves.  It’s a nearly 100-page, softcover book that expands the existing material for the IKRPG for urban-style campaigns, but is it worth picking up for your average player?

Careers –
The Urban Adventure supplement offers several new race-specific careers.  Not only are they all appropriate for an city-centric campaign, but many of them act as solid delivery vehicles for the setting’s non-human races in or out of the urban environment.  Some of them strike me as being a bit specific in practice, like the Ogrun Labor Korune, which is effectively the leader of an organized ogrun labor group.  Most others are markedly more general in application, like the exiled Iosan Seeker, an investigative-type career with strong social capability for players wishing to secretly explore the mysteries of the fading elvish pantheon while fitting nicely into nearly any group type.
I’m particularly fond of the Gobber Guttersnipe career, which specializes in urban espionage, information gathering, thievery, and infiltration.  While Gobbers will always be hard-pressed to be the combat monsters that the other Iron Kingdoms races are capable of being, careers like the Guttersnipe can potentially make the race extremely useful off the battlefield.
The other careers include the agile Nyss Urban Nomad, the burly and intimidating Ogrun/Trollkin Pugilist, the shrewd Rhulic Searforge Trader, and finally the human Thamarite Advocate, which is presented later in the book in its rather nice section on Thamarites.
That final addition, to me, is well-deserved.  While worship of Thamar is somewhat of a taboo in the Iron Kingdoms, I felt strongly that it really should be in there as a career option, so I’m very happy to see the Advocate.  It’s a great career all-around, and can be highly-defining in terms of a character’s overall theme and flavor, featuring strong mechanics for both combat and social interaction.  The career itself is also pretty flexible in terms of what can be done with it.  If you want to spread your focus between your initial careers, you can just grab the abilities and spells that best correspond to your character.  If you want to just delve into Necromancy and thrall crafting, you can do that.  If you concentrate on soul collection for spell slinging, that’s a solid option, too.  If you just want to focus solely on the Advocate and just take a few abilities and skills from your other career, that’s perfectly viable as well.
Just be aware that Thamarites by their very nature are self-serving, so if you’re considering running one, there needs to be a strong sense of social contract with your group and GM.

Of these careers, I think that the Thamarite Advocate, Seeker, and Searforge Trader are fantastic for pretty much any style of campaign, while the others strike me as being very much specifically designed for city-set adventures.

Urban Equipment and Weapons –
Urban Adventure presents a handful of new equipment and weapons for the game, like collapsible pistols and rifles that can be easily stripped down and concealed until they are needed, espionage-style items like disguise kits, forging kits, and listening devices, and a slew of new recipes for alchemists.  While my initial experience with the Alchemist career was that it was a bit lacking in terms of useful things to concoct, Urban Adventure nearly doubles the volume of options, from the crowd-clearing Fear Gas, to the occasionally handy Truth Serum.
Combat Maneuvers –
The supplement also introduces new ways to attack called “combat maneuvers”, which are split into two categories: Armed and Unarmed.  Armed techniques give new options to characters that are carrying weapons, like the “Half-Sword” ability which allows characters carrying a Greatsword or Caspian Battleblade to gain a +1 bonus on attack rolls in exchange for a -2 penalty on the damage side.  Characters carrying ranged weapons can now spend a feat point to use them to bludgeon close enemies with a “Pistol Whip” or “Stock Strike” attack.
Unarmed maneuvers give characters specializing in fisticuffs new and interesting options.  Many of them can be done at any time, like the Eye Gouge, which does minor damage and causes the target to suffer a momentary penalty to attack rolls, the Foot Stomp, which causes the target to suffer a penalty to SPD, and the Throat Punch, which renders the target unable to give orders or speak.  The rest of the Unarmed Maneuvers require that the attacker be grappling their target and include the Hip Toss to knock the target down, the Choke Hold to cause the target to tap out, and the Fish-Hook to damage to target for as long as the grapple is maintained.  This section is rounded out with new improvised weapon options like throwing dirt in some one’s face, attacking someone with a broken bottle, or throwing enormous objects around like anvils.
Urban Laborjacks –
Urban Adventure introduces a pair of new laborjack chassis: the heavy Artificer and the light Bulldog.  Due to their low-grade cortexes and unimpressive PRW and POI values, using these steamjacks will require some tender, loving care and generous use of boosting mechanics on attack rolls.  Those willing to invest in these chassis will find an alternative to the other available, non-military steamjacks that offer markedly higher survivability thanks to higher ARM stats and a more robust damage grid.  A Bulldog armed with a simple Halberd and Shield will have a serviceable level of accuracy on the charge while stomping around at ARM 18.

The city of Five Fingers is an oft-used backdrop in many an Iron Kingdoms game.  It’s effectively the Mos Eisley of Western Immoren, run by the corrupt pirate lords of Ord and a hive of villainy and deceit. While this section is mostly aimed at providing Game Masters with background information on Five Fingers, there’s a lot of good stuff in there for players to pick up on if they’re looking to seriously delve into life within its borders.  That said, almost all of the information presented in this section is reprinted from the Five Fingers supplement that Privateer Press published for the first addition of the IKRPG, so if you own that already, you’ll find this section largely redundant.

Overall, I think that the Urban Adventure supplement has some great new options.  If you’re already mid-campaign and playing an Alchemist, I would highly suggest giving the book a glance, as it provides some pretty solid additions to the career in terms of equipment.  ‘Jack marshals and warcasters looking for a cheap, burly alternative to the other available laborjacks will find some interesting options as well with the Bulldog and Artificer.  Players starting new campaigns or characters will find some gems in the career section as well, even if your game isn’t necessarily set in a city.