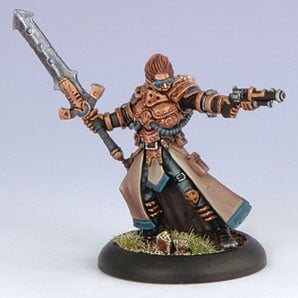 When I jumped back into Cygnar after a long hiatus that began during the mid-Superiority era of MkI Warmachine, I spent a lot of time playing with Captain Coleman Stryker.  He was the first warcaster I every played, and I have many a fond memory of the time.  When I came back to the faction a year ago, then more than two years into MkII, I had found that Captain Stryker, aka pStryker or Stryker1, had fallen out of favor in the competitive metagame, which was somewhat odd to me.  While I spent a good chunk out of the last year switching between warcasters and factions with an attention span in the neighborhood of an overstimulated preadolescent with a Jolt Cola IV, a metaphor most likely and amusingly lost to today’s preadolescents, a few months ago I decided to really sit down and give Capt. Stryker some much-needed attention.

Overall, I continue to really like this list.  The game above presented some difficult challenges for me.  The combination of Paralytic Field (the Krea’s animus) and Defender’s Ward really put my ranged game up against the wall looking at those four hard-hitting, heavy warbeasts with pretty large damage grids.  Consequently, playing the attrition game was going to prove difficult there.  Once the Krea went down, taking down a heavy in a single turn isn’t going to be much of problem, but with four of them, I don’t think I’d be able to hold them back long enough, even with Stryker’s feat on the Stormwall.  This is why I specifically went for the assassination when it was presented.  I’d normal prefer to hold off and play attrition, but when your opponent will inevitably out-attrition you, you have to take drastic measures.

Missing that attack roll on Kiss of Lyliss on double-ones was the biggest failure there.  Had that hit (98% odds), each of my attacks would be doing an additional two damage, which would have been more than enough to drop Makeda, but alas, these things happen.  Luckily, I survived his counter-attempt with enough intact to put Makeda down.