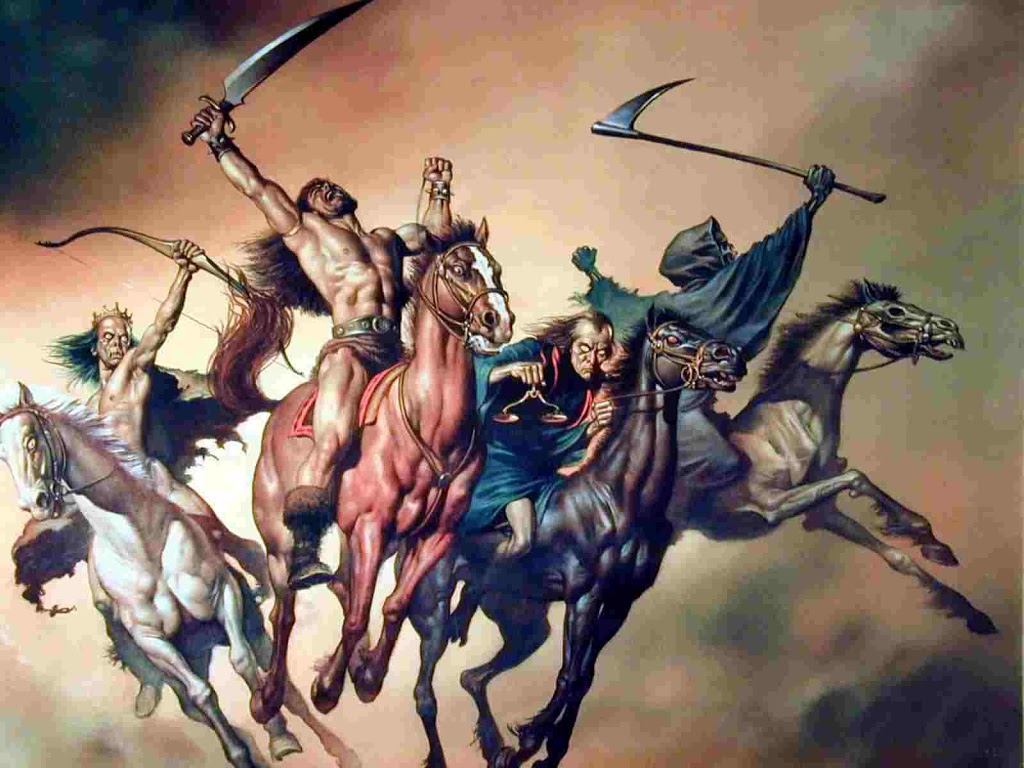 Like a rolling thunder chasing the wind, forces pulling from the centre of the earth I guess.  The Warriors of Chaos are here to stomp some faces!

Hey everyone, it’s Adam from TheDiceAbide.com, and today I’m going to be talking about my first look at the Warriors of Chaos army book.  One thing you’ll notice right off the bat is that I will make no reference or mention of the previous book, that’s simply because it does absolutely nothing constructive when you get down to it.  How many points X unit used to be wont do any good today, besides, this is just going to be a general overview, not really a unit by unit breakdown.

This seems to be one of the thinner books, weighing in at 96 pages.  That said, the artwork in the book seems to be some of the nicest I’ve seen out of GW’s new hard back books, with many totally new pieces of work to excite even the staunchest veteran.  Often times with excellent moody lighting, limited pallets and a very realistic effect that makes Chaos really seem like the horde walking down from the badlands to pillage your poor mud farming Empire village.

The Eye of the Gods

Whenever you win a challenge, you get to roll on a lovely chart that mostly consists of increasing stats. If your’e particularly lucky, you can even turn yourself into a Daemon Prince!  There isn’t much gaming you can do around the chart in particular, though being near a Warshrine lets you roll and extra dice and discard one of your choice.  Chosen however roll at the beginning of the game, after deployment, on the chart, with 3D6 and discarding one, so if you deploy near a Warhsrine, you can roll 4D6 and pick any two, which greatly increases the chances of getting a free Daemon Prince!  Overall, the chart is very beneficial, except for the increased BS, though I suppose it’s still better than becoming a spawn.

The Lores of Chaos

As expected, each god gets it’s own special Lore of magic, and I gotta say, they’re all very enticing.  Tzeentch magic is almost entirely Direct Damage or Magic Missiles.  It has a pretty crumby Lore Attribute, but it may as well have 2 Lore Attributes because of the Warpflame special rule.  Each of the damaging spells causes an additional Toughness test, if failed, the unit suffers D3 wounds, if passed they gain Regeneration (+1), so the more damage you cause, the more resilient you may end up making your opponent.

Lore of Nurgle is mostly Augment spells, which mostly mimmic the effects of Lore of Shadows, though it also has a Magical Vortex which deals damage based on Toughness Tests.  It’s lore attribute can also permanently make your wizard harder to kill, every time you cast a spell, roll a D6, on a 6 you get +1T/W for the rest of the game!

Lore of Slaanesh is another utility lore, but with a couple really nasty Hexes.  Two of them give units Always Strikes Last and Random Movement (D6) and the other makes the unit roll an extra D6 and discard the lowest when taking Leadership tests!

Overall, I don’t think any lore is a stinker, but Nurgle and Tzeentch are both really awesome to see on the board.

Now that I’ve told you how much the new art, lets get to the goodies in the book.  Generally, I don’t play with special characters, that said, this book would make me want to start.  Archaon is an absolute monster who has all 4 marks properly, and the other characters all seem fun and interesting in their own way, though I wouldn’t expect to see many of them, aside from maybe Valkia the Bloody, Throgg and maybe Festus (who can now force feed the enemy his lovely potions).

As to be expected, the Warriors of Chaos have some potentially disgusting characters, (i.e. Chaos Lord with halberd, Chaos Armor, Dragonhelm, Crown of Command, shield, Talisman of Preservation, Flaming Breath, Mark of Tzeentch, Third Eye of Tzeentch, rides a Disk of Tzeentch, 1+/3++, re-roll’s 1’s for his ward, and will generally be a huge pain).  For the first time in a long time, you might actually see a Daemon Prince on the field.  They’re pretty brutal and now that there is a good selection of Daemonic Gifts, plus their 25 point allowance of normal magic items, you can kit out a fairly brutal monster to lead your army.  Their Heroes are also pretty brutal, on par with many armies lords, though as anything else in the book, you’re going to be paying a big premium for every bit of killing power you buy.

Lastly, this book has a massive list of mounts, which includes barded steeds, daemonic mounts of several varieties, both chariots, Warshrines, Manticores and the ever present Chaos Dragon (though those last two are only for Lords).

The meat and potatoes of any army, the core units need to be the backbone of your force.  The Chaos Warriors and Marauders themselves seem to suffer from what Chaos Marines do in 40k (though not as badly).  While as a basic unit, they’re definitely worth their cost, you can quickly make them far more expensive by adding marks and various pieces of equipment.  This is especially risky with Marauders, which could end up costing in excess of 10 points each if you’re not careful.  Aside from normal rank and file units, Chaos has cheap hounds for redirectors, Marauder Horsemen for some fast cavalry, plus the Chaos Chariot, for when you need a little extra punch.

The Chariot in particular stands out from the crowd, and when given the Mark of Khorne, suddenly you have a fairly quick moving threat which can deal 6 S5 attacks, 4 S4 attacks, plus D6+1 impact hits, with a sturdy T5 W4 and 3+ save.  I can definitely see many armies being built on a foundation of Khorne Chariots in the none too distant future.

With no less than 9 choices in the Special section, it is going to be hard for many players to figure out how to best select their choices.  Most Special choices are going to be quite expensive, as a fully kitted chaos Knight is more expensive than an Irongut, and Chosen can easily be 25+ points per model (which means 1000 for a horde of 40!).  Dragon Ogres are particularly disgusting and I’m sure we’ll see plenty of them on the board, plus their miniatures are just beautiful.  Chaos Ogres might make an appearance in a few armies, though I personally am thinking Chaos Trolls with additional hand weapons might be a bit better of an investment.

The Warshrine can also be found here, and with Mark of Tzeentch, it becomes quite resilient (4+/3++).  Also, like it’s Core counterpart, there is a new chariot here, except with T6 W5 and a 3+ save, which has Killing Blow impact hits!  Yum!  Lastly, and probably the most shocking, is the presence of a real monster in Special, the Chimera.  Having a true monster in Special means you could effectively run a list with 4 flying monsters in it, which might be fun to give a shot from time to time.

Now we get to the real hard hitters!  Like the Special choices, Rare is filled to the brim with interesting options, and some of the most unique.

The Helcannon is a S5 stone thrower that fights quite well in combat.  The closest thing I can equate them to is an Ironblaster cannon, in that while it’s dishing out artillery attacks, it will also easily fend off most, if not any, warmachine hunter.

The Chaos Giant, Dragon Ogre Shaggoth and Slaughterbrute all kind of fill the same role of a fighty, smashy monster.  None of which really stand out to me, though the Slaughterbrute does have a new model, but it’s special rules can really end up screwing you over if the character it’s bound to dies (then it’s like having a giant, ugly Night Goblin Fanatic running around in your army).

I’m probably the only person in the world who rates Chaos Spawn.  While you wont get many (only 1 per rare choice), it’s still a very cheap, T5 unbreakable model.  I’ve thrown these into units of High Elf Spearmen and just laughed as they struggle to kill it over several rounds of combat.  If you’re like me and want to give them a bit of extra punch, one marked with Tzeentch will get a lovely breath attack!

Skullcrushers are the Warriors of Chaos answer to Monstrous Cav, and with a monstrous price tag.  They’re the most resilient monstrous cavalry in the game, sporting T4 and a 1+ save, as well as a plethora of S5 attacks from both the mount and the rider (when given Ensorcelled Weapons).  I probably wouldn’t run more than one small unit of these, unless I was doing an all Khorne army.

The last Rare choice is the Mutalith Vortex Beast, and for some reason, I love this guy.  It has a fair number of random attacks, plus a Bound Spell which will usually cause D6 Toughness tests, plus a weird little effect, or it could potentially make the entire enemy unit take Toughness tests!  In addition, .  Probably the nicest thing about this bound spell is that when you cast it, there are two things that’ll happen, your opponent will overcompensate dispelling it because they’re afraid of you rolling a 6 and making the whole unit vanish, or they’ll let it through, and you might get lucky and roll the 6 anyhow.  Either way, I love it.

As with the other 8th Edition books, Warriors of Chaos come off as quite balanced.  There are great options in every part of the book, and with how expensive everything is, players will be forced to pick and choose their favorite units, and will often be running very compact, but effective armies.  I expect that some units will be fairly ubiquitous though, such as Khorne Chariots and maybe that super killy Tzeentch lord, though only time will tell.

What are your thoughts on the latest Warhammer Fantasy arrival?