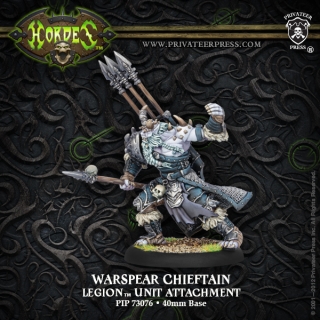 We have a new Unit Attachment in town and he is glorious!  Hey guys, Caldera here to talk to you about Legion’s new UA for the Warspear unit.

For the longest time, I have not got around to using warspears in any of my games.  They are a semi expensive unit in game and don’t perform as well as other comparable units on the warmachine side.  Then the two player hordes box came out and we get new plastic warspears.  At this point I decided to give them a shot and see if I could make them work.  Even though there are some warlocks that make them kind of work, I feel that they still don’t really cut it.

With the release of Gargantuans, Privateer Press gave Legion players this new Unit Attachment, the Warspear Chieftain.  Let me tell you, I have played with this guy in quite a few games already and I am really impressed.  What he does for the Warspears is nothing short of phenomenal.  If you really want to get crazy, you can add in the Warmonger Cheiftain for even more accuracy.

Alright let’s go over what he does specifically:

Cost – 2 pts.  Awesome!  All of our current UA’s cost 3 pts!
Stats – He has the same basic stats of the warspears with +1 Mat and Rat.
Abilities – Tactics: Relentless Charge and Huntsman.

This is what he really brings to the table for this unit in these two abilities.  The first one allows for the obvious  weakness in the unit, terrain.  On the charge they can get where they want to go now, over walls or through forests.  The second ability is really awesome.  Huntsman is Prey for the whole unit.  So with this ability we take the Warspears up to an impressive Rat 7, or Rat 9 with the Warmonger Chief!  Also this pumps them up to Mat 9 or 11 in melee!!!  The other part of prey is gravy, adding 2in to movement if they start within 10in of their prey.  This is pretty useful when getting more wriggle room on charges.

So all in all, after playing with this guy over the past few weeks, I am really impressed with how much he adds to the Warspear unit.  I actually have really enjoyed them with pLylyth.  Couple their accuracy with her feat and you have some super accurate spear chuckers!  If you like warpsears or were interested in picking the unit up to play with, I would definitely suggest getting this Unit Attachment for them.  I would consider him an auto include with them now.

Anyone else having fun with the new Legion goodies!