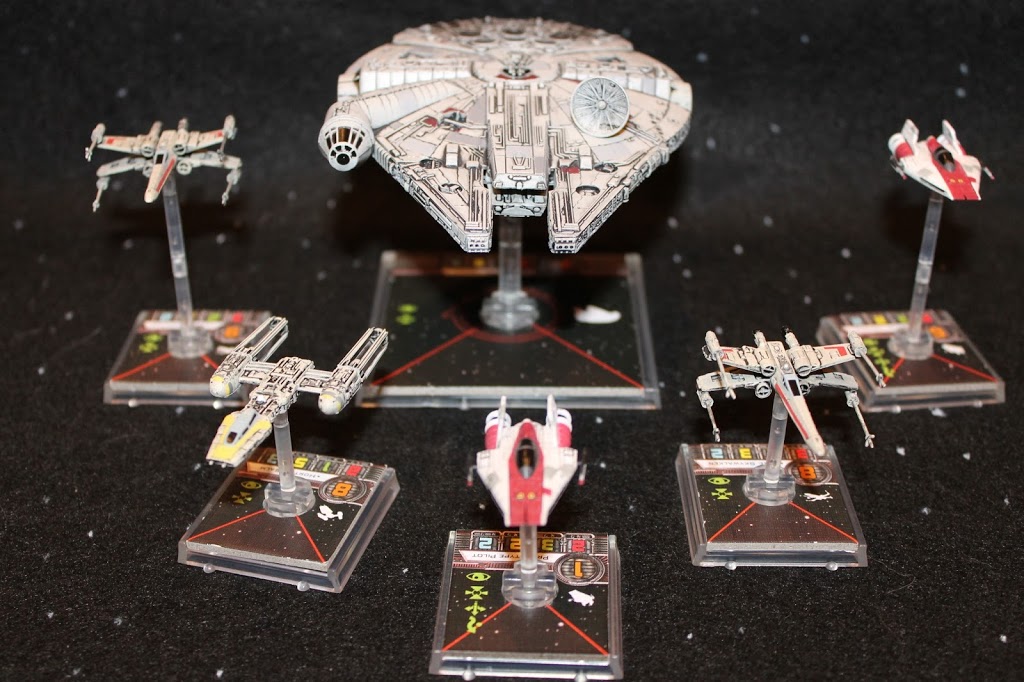 I get asked a lot what should be bought when starting X-Wing Miniatures- two Core Sets? Three? A copy of every Expansion? As X-Wing Miniatures are tough to find, read on to find out what all you should keep in mind. Hey! That rhymes!

In fact, I think I’m about the only person that’s not been saying “Buy 2 Cores and one each of the Expansions, possibly an extra X-Wing, and at least 1 extra TIE Fighter.”, since the very start.

To be fair, that stock answer isn’t a bad answer- it gives a tremendous amount of flexibility in ship list options and pilots, but it’s a Wave 1-centric answer that still being parroted on the internet and it doesn’t fully take into account any of the Wave 2 stuff that people might be more interested in fielding or the Wave 3 stuff coming out sometime in Q3 (according to FFG).
At the risk of sounding semantic, the question isn’t “What do I need to buy to play X-Wing Miniatures?”, the question instead is, “What do you need to buy to play X-Wing Miniatures?”
While you can download the X-Wing Miniatures Rulebook from FFG, buy a set of X-Wing Miniatures Dice or download the FFG Star Wars Dice App (for iPhone or Android), and even purchase acrylic maneuver and range templates from various manufacturers, you do still have to purchase a Core Set to play X-Wing Miniatures to at least get the Damage deck.
After that, suggestions of what to buy get a little more complicated. You can play the game with only the stuff in the Core Set, but most people pick up a few more ships right off the bat or very shortly thereafter. Here are some things to keep in mind before you buy anything: 1. The Tournament Standard for X-Wing is 100 points.
Now, even if you don’t plan on becoming a tourney player, this is still the level at which most folks play the game, and the level at which most of the scenarios are designed to be played. Your mileage may and can vary, of course, but generally when you see people talking about lists and stuff, 99% of the time, they’re talking about 100 point lists.

X-Wing Miniatures can be played at lower or higher point totals of course, but 100 points is the number where the majority of pick-up games occur, so it’s the number most folks shoot for. This post assumes you’re doing the same. If you’d rather play less or more, adjust accordingly and bear in mind, just because you play at 100 points, you obviously don’t have to limit yourself to only having 100 points worth of models. It’s always nice to have a few extra ships so you can change up your lists to keep things interesting for you and your opponent.
2. All Ships in X-Wing are Viable to Field.
If you want to field a force of exclusively X-Wings, Falcons, TIE Advanced or whatever, have at it- there really is a pretty surprising amount of balance in this game. Caveat- some ships are definitely easier to play or more accessible than others, but the game and points are balanced enough that you can do it and still have a chance of winning the game against an opponent of similar experience and skill level if you know what you’re doing with your list. Really, it just depends on whether or not you want to do some kind of themed force or if you particularly like (or dislike) a certain ship or model.
If you want a general idea of how the ships and pilots match up as far as easy or difficult to use, check out some of my Listbuidling articles on TheMetalBikini.com and you ought to get a pretty good idea of the ships and their capabilities and accessibility for a new player.
Here’s some points estimations on the ships- low being lowest Pilot Skill pilots, high being higher skilled pilots with a bunch of upgrades, to give you an idea of how many and of what ships you would have to buy to get to 100 points.
Rebel Ships
Falcon- 27-70 points
X-Wing- 21-40 points
Y-Wing- 18-35 points
A-Wing- 18-35 ponts
Imperial Ships
Slave 1- 33- 75 points
TIE Fighter- 12-20 points
TIE Advanced- 21- 35 points
TIE Interceptor 18- 35 points
Please keep in mind these are ballparks- I may be off a point or two on the high end of things and obviously the spread depends on named pilots, upgrades, modifications, etc. which may or may not be available to all the pilots that come with that particular model. 3. You Probably Need an Extra Set of Dice.
Why they only gave you three Attack and three Defend dice with the Core is beyond me when four covers nearly any naturally occurring dice event in the game. Don’t get me wrong, it’s handy to have an extra set of maneuver templates to teach a friend how to play or whatever, but it shouldn’t be the sole reason you buy another Core as you can buy an extra set of dice by themselves or if you have a iPhone or Android phone, pick up the app instead. The Star Wars Dice App also includes Edge of the Empire dice as well as the more standard RPG dice (d4, d6, d8, etc.). You can also set up presets to represent the dice for particular ships, but honestly, it’s quicker to just add the dice you need manually unless you only ever use one type of ships in your lists.
4. The Core Set Doesn’t Include All of the Available Pilot Cards for the X-Wing or TIE Fighter (and neither do the Expansions).
Although the Core Set comes with 1 X-Wing and 2 TIE miniatures, it does not include all of the available pilots, though it does contain several pilots exclusive to the Core Set. In other words, if you want to have all of the available X-Wing and/ or TIE Fighter pilots, you’ll need to purchase both the Core Set and the Expansions- neither have all.

The Y-Wing, TIE Advanced, A-Wing, TIE Interceptor, Millennium Falcon, and Slave I come with all the available pilots included. The only real purchase consideration beyond the pilot cards are the various upgrade cards as Tournament Rules say you have to have a copy of each card when you include an upgrade. To put it another way, if you’re running a 5 TIE Fighter Swarm and want all of your ships to have a Stealth Device installed, then you’d need 5 copies of the Stealth Device Modification card if you wanted to play that list at an official tournament.
5. Should I Buy Two Cores Then?
Buying a Core Set is cheaper than the combined cost of buying a X-Wing Expansion, two TIE Fighter Expansions, and a set of X-Wing Dice.
Again though, it’s only cheaper if you want to field more than two X-Wings and more than 3 TIE fighters (I say more than 2 X’s and more than 3 TIEs because you’re probably going to want to pick up those Expansions to get the rest of the Pilot cards, so you’ll hit 2 X-Wings and 3 TIEs anyway). If you have no interest in fielding those models in those amounts, you should just buy a single Core, the Expansions you are interested in, and a second set of dice. If you do want to field three or four X-Wings or do a TIE Swarm, by all means, pick up more than one Core Set!
Online retailers will of course be cheaper than brick-and-mortar stores, and frankly, if you don’t utilize a B&M store’s resources (tables, gathering space, readily available player base, etc.), there’s little reason to buy from them if you’re only going to play at your house or dorm room or something. If you do play at a store, please do the right thing and patronize them.

As for what’s available currently, it’s pretty much Core Set, the Falcon, and Slave I widely available both in stores and online. Everything else is fairly hit and miss, pun intended, at the time of this writing (early June 2013). Note that this situation is changing despite what some folks may believe or may tell you- I received emails that some of the European retailers got shipments in last week of Wave 1 and Wave 2 ships. Reprints are coming (check the Upcoming page on the FFG site for the latest official word) for both Wave 1 and Wave 2 ships, and as mentioned above, in some cases actually hitting shelves, but they’re snapped up quickly by folks, so keep your eyes open and don’t be afraid to check retailers you might not normally patronize for gaming stuff like Target and Barnes and Noble.
If you want to get into X-Wing Miniatures but don’t know your Evades from your Target Locks, by all means, stop on by the hippest pilot bar in the galaxy- TheMetalBikini.com. We serve all kinds (yeah, even droids- they’re the best tippers), and have a whole bunch of articles from breakdown summaries of every single card released so far, to tactics articles, to our Bikini Battle Basics new player guides- all served up with a heapin’ helpin’ of my own personal brand of slang and humor. Can you dig it?