HOBBY: Lord of Skulls Conversion You MUST See 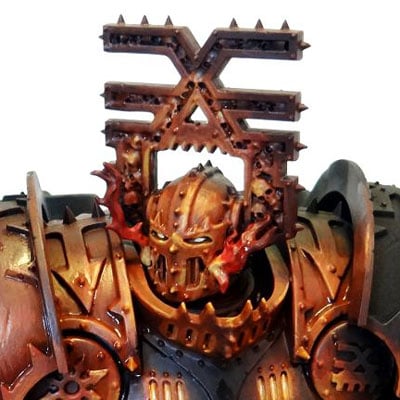 I love a good conversion as much as the next guy, but when Isotope99 said he wanted to convert a Lord of Skulls into a giant counts as Bloodthirster I knew something awesome was on the way!

First up was the basic build of the conversion.  This mighty beast uses: As you can see, Isotope99 has combined the various legs of the Defiler into a set of clawed “Raptor legs” for the Lord of Skull’s upper body.  Next he fashioned an ingenious “Raptor Jumppack” out of two of the giant holding tanks from the Lord of Skulls and the Heldrakes wings.  At this point, folks on Facebook and the BoLS Lounge were losing their minds…

Then Isotope99 painted the sucker… A couple of points here.  The artificial lightsourcing, and minimal palette is a bold choice, especially for such a centerpiece model.  Secondly he’s pull it off so well!  The sense of white-hot heat boiling within the darkened iron body is palpable.

Secondly take a look at the parts of the model Isotope99 didn’t paint.  Just think of the temptation to go back one last time and give a little warm glowy highlights to those sections he left unadorned jet black.  It takes a really confident painter to NOT go back and let the blackness work to support the overall paintscheme.

You can follow the full thread here – it’s worth taking a look.

Lets’s give the man a hand – AMAZING WORK!