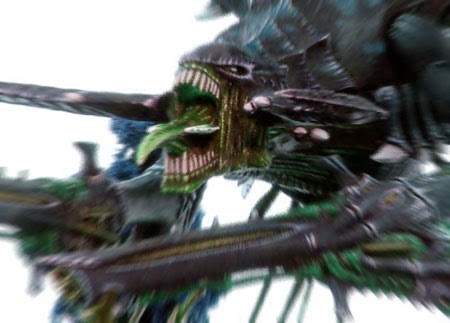 RUN! The Hivefleet rumors are coming – and just about time.  You can’t expect icy evil elves to hold up everyone’s interest for 2 months. Here we go!

via the whispers in the wind…

First off, as with our previous rounds of rumors some ratings.

We rate these probable, coming from solid sources

-Tyranids kick off 2014 ~so look for pictures and craziness to ensue in the December rampup
-An emphasis on making EVERY unit in the codex viable this time around ~we’re looking at you Pyrovore!
-The army rules and theme are focused on adaptability of unit abilities and inter-unit synergy ~there will be “combos”
-Emphasis on model releases will be to get out all the missing models in the previous codex
-Look for a small number of highly specialized new units to shore up 6th edition deficiencies in the army
-A new unseen big bug kit is among these

Tyranid-hunters
-Ultramarine Tyranic War Veteran Supplemental codex is the next supplemental book coming, to tie into the release and to provide worthy foes for the hive-fleets.
-BOTH digital and physical versions out in Q1 2014

Full Tyranid Rumor Roundup
~Hmm, so Tyranid players, exactly what notable problems does the current book have that you think a new unit might address?