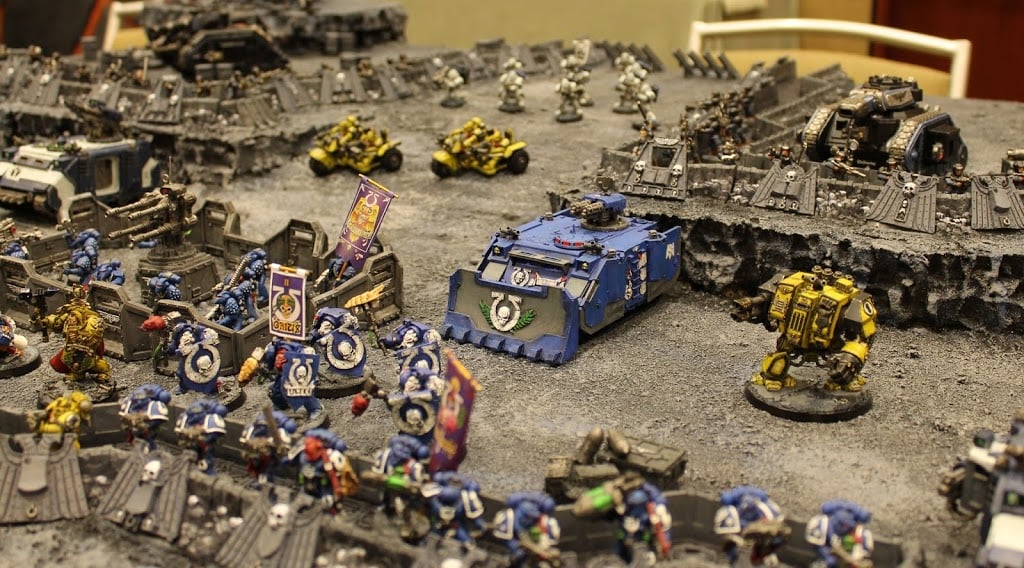 Stronghold Assault is here to stay, but how will the community wrap their arms around our latest rulebook?

Let us take a look at two different viewpoints on Stronghold Assault:

The Tournament Angle
Here is what one multiple GT winning veteran player recently had to say (i.e., his opinions):

Escalation and Stronghold Assault can benefit every army… yet no serious tournament player wants to see them within a million miles of a tournament setting—they have no place as this type of player wants a rough ratio of 1/3 luck, 1/3 skill and 1/3 list writing balance for a fair and enjoyable environment.

He then has this to say about Stronghold Assault:

Stronghold fortifications will be the best balancing factor this edition has seen—you can do almost anything with them. Do you need some air defense—get a couple of upgraded Firestorm Redoubts with a trench line running between them… Or you’re running an assault army—buy some void shields for hard cover to safely move your melee units across the board… What do you mean my Tau CHIP commander suddenly does not ignore void shields??? Or oh no it’s the much dreaded and highly debatable Jeetseer Council or ScreamerStar—sit in your Fortress of Redemption and laugh at them while you systematically gun down all their puny troops then the last turn jump out of your escape tunnels to claim objectives.

Calling down Exterminatus… You never had a chance !

Stronghold Assault is going to save sixth edition… There… I said it and it’s not hard to set up either. Treat it like a tank shock and move intervening terrain the shortest distance to allow the placement of the fortifications if you use preset terrain…..not hard and it doesn’t take long. Note that the BRB says to first place fortifications and then terrain (and now we finally know why – wink wink).

Keep in mind this is coming from a competitive tournament gamer that loves his forts and as such it’s good insight from that particular perspective.

The Casual Player Angle
Here is another opinion from a more casual player:

I really enjoy the amount of new kits that GW has produced—other games can’t touch them in this regard and the tournament setting is a losing battle because of it. We all want cool new stuff, which makes a balanced game near impossible and I would not trade a balanced game for that very reason. I just love the new Kill Team rules and the other new rule books.. A ton of variety has recently blossomed. Trying to fix that is really a no win situation. I have played more fun games than not, so have at it, try and balance the game… the moment you do they will release a new codex—new models and new rules to mess it all up again… Three cheers for the new units, down with tournament balance.

The Extras No One is Talking About
Allowing the use of rules for items such as fortifications requires more work on the part of the tournament organizer… If it’s not well thought then something will go wrong and you’ll pay the heavy price, which is always a bad thing. Thus I can understand why TOs are initially very reluctant to embrace these new rules.

Rules for Stronghold Assault
Let’s take a closer look at the actual rules for Stronghold Assault and move on past the week of hype and Internet nerd rage. One of the first things I noticed when looking at the missions is they were all written for an attacker and a defender—each has their own special FOC. The defender can take one fortification and there is an option for up to two additional. The attacker can take up to four heavy support, one fortification and there is an option for one additional. Allies are optional for both the defender and attacker as per the BRB. There are three missions all classified as siege warfare. Two of the deployments are as per the BRB (i.e., Dawn of War plus Hammer and Anvil) with one new (Box in One). Each mission also has some new special rules you’ve not seen before for that were specifically designed for Stronghold Assault. There’s a lot more to it than simply plunking down your forts and TOs need to factor all these new elements into designing any mission that allows the use of fortifications from Stronghold Assault—these are the official guidelines presented from Games Workshop for their inclusion.

Going by the table of contents the rest of the new rules are broken down into two groups:

Fortification Datasheets
These include existing fortifications such as the Aegis Defense Line plus a big slew of new ones including the Aquila Strongpoint with your choice of a macro cannon or Vortex missiles (uh oh it’s the D word). The one important thing of immediate interest I take away from all this is (if nothing else) you can use the additional rules to supplement your games of standard 40k and they are better implemented now. If you decide to use nothing but the additional rules for standard 40k then I strongly recommend you discuss this in detail with your opponents prior to using them so as to avoid any potential arguments… It’ll save you both a lot of frustration.

Closing Thoughts
I could go into lots and lots of detail covering the rules and tactics for new fortifications but I think that’s better served in separate discussions much like you often see reviews specifically focusing on the aspects of one particular new unit such as the Buff Commander. If Stronghold Assault grows some roots in the 40k gaming community I’m sure you’ll see plenty of those types of articles and all the various 40k Internet gurus will eventually chime in telling you how best to use and break them. Maybe it’ll just blow over like Planet Strike back in fifth edition.

Interestedly enough I’ve seen plenty of video batreps featuring new super heavies and gargantuan creatures from Escalation but not one showcasing a new fortification… That right there tells me it’s much easier to plop down a Stompa with nine Mekboyz onboard than it is to implement all the new rules for fortifications. So while we shouldn’t run around like Henny Penny proclaiming the sky is falling it’s very important to denote that there are lots of factors that go into designing good missions for tournaments that properly implement the use of Stronghold Assault… Angels fear to tread where fools rush in as the saying goes.

Are you adding new Fortifications to your lists?