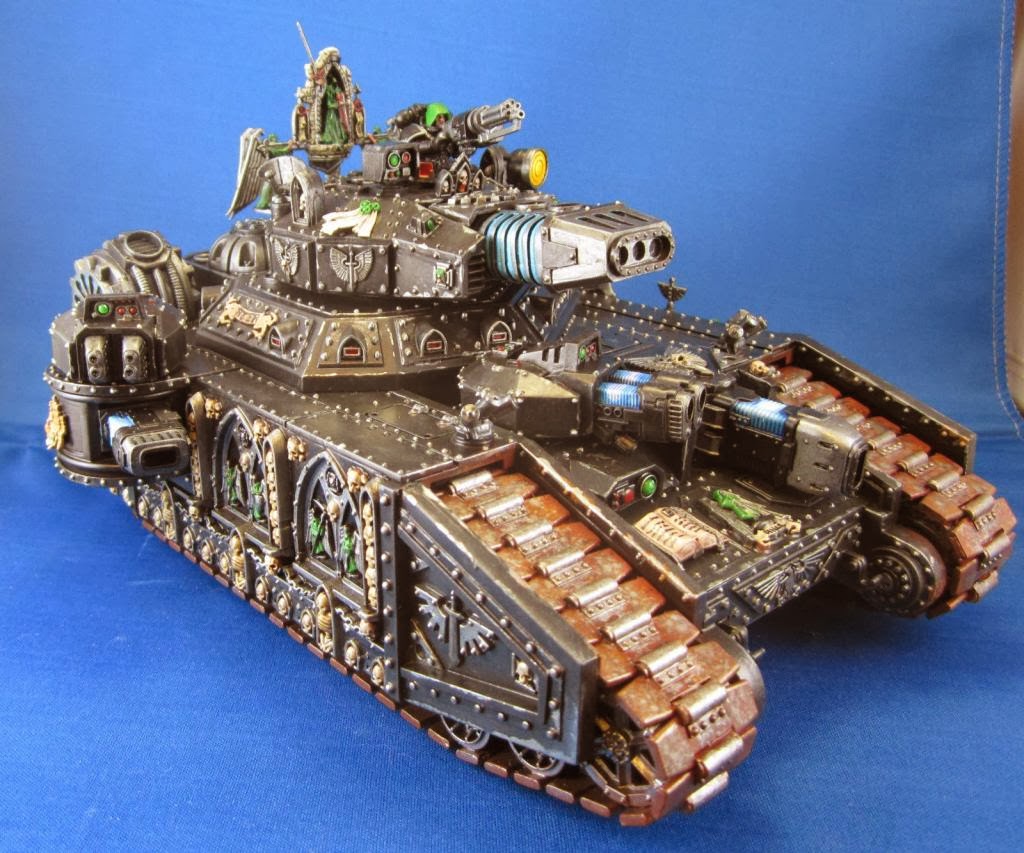 If you don’t know Tom McBride, he was making Fellblade conversion kits before Forge World was even thinking of them for the Horus Heresy!
And now Tom has made a Dark Angels version, had it painted up, and is auctioning it for Toys For Tots.  You can find it on eBay now.

From Tom McBride:
With the holidays coming up I thought it would be in the spirit of the season to give a little something back to the community. So I’ve decided that this item will go up for auction with ALL of the money raised going to Toys for Tots just in time for Christmas! I’ll even cover the shipping cost. Not only will be fun but it will be going towards a great cause as well. The Angelus Redemptor’s service to the Dark Angels Legion can be traced back to the later days of the Great Crusade where it served as the command vehicle of their elite armored company known as the Ironwing.  Constructed by the Legion’s techmarines under the gaze of the Mechanicum this super-heavy tank was fitted with a unique dual chambered plasma reactor that could not only power the machine’s main drive indefinitely but could also be tapped to provide munitions for its vast array of plasma based weaponry.  However, in the chaotic aftermath of the Horus Heresy the Angelus Redemptor disappeared from the Imperial records and it was feared lost to the Mechanicum, until now….

At long last it is here, rolling from the forges of Blood & Skulls Industry and expertly painted by Tommy Clark “Munkey Joe”.  I present to you the Dark Angels very own super-heavy tank: The Angelus Redemptor!  Based on the Baneblade plastic kit this tank is loaded with tons of resin parts from Blood & Skulls Industry and Games Workshop plastic bits making it one huge custom model that would be the centerpiece of any Dark Angel army.  Gothic, mysterious, and armed with more plasma weapons then you can shake a Sword of Secrets at this machine of war truly has a place alongside the sons of Lion El’Johnson on the battlefield.  And now it can be yours!
The Angelus Redemptor is now available for auction on eBay but the story does not end there!  In keeping with the holiday spirit 100% of the money raised from this auction will go to Toys for Tots, and I’ll even cover the shipping.  So be your own angel astartes to the children in need this season and place a bid today! Please support a worthy cause and build your Dark Angels army up at the same time!