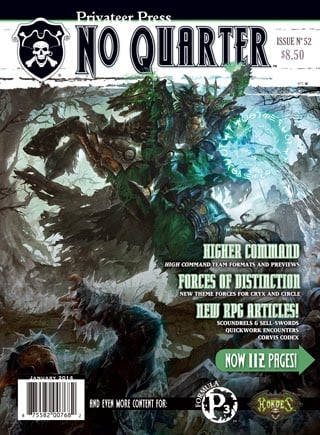 Perhaps the biggest thing to point out about this issue is that it’s 16 pages longer than last November’s Issue 51. The increase in content does come with a price though. This issue comes in at $8.50 – a buck more than the old price. So what does this issue have inside?

It starts off with the usual News from the Front with a few tidbits about what’s going on in the world of Privateer Press. Then there’s the usual Iron Gauntlet update followed by pics of the releases you can expect in the coming months. Don’t forget you can always check out Privateer’s list of upcoming releases on their Release Schedule Page. Up next are the juicy parts that most of us will probably be buying the magazine for: the Vengeance Previews. This month we have the Skarlock Commander, Issyria, Sibyl of Dawn, and Goreshade, lord of Ruin. While these have already been pretty thoroughly spoiled on the internet, I still won’t publish their full stats. You should be able to find them easily enough if you like by simply punching their names into Google, and if you have War Room, you can use it to see the Skarlock Commander right now.

The previews are followed by a Warmachine Tactics article on level design. It’s really cool to see how the first Warmachine video game is shaping up.

This month’s Guts and Gears article focuses on the Protectorate’s Paladin order. These guys are one of the more interesting parts of that faction. They’re among the few Menites that place protecting the helpless higher on their priorities than spreading the faith; a lawful good order within a faction that is largely lawful evil. As always, in addition to the fluff there are also tactical tips on the paladin’s uses and a painting article with tips on alternate paladin paint scheme. The Corvis Codex has more content for the IKRPG. It gives players a new adventuring company to join: The Brotherhood of the Bloody Shroud. This order was created to fight the many diseases with which the Iron Kingdoms are beset. So it only seems natural that this entry also provides a compendium of the various plagues, illnesses, and maladies a party may face during their campaign.

In January’s Modelling and Painting segment Rob Hawkins gives a tutorial on creating Cygnaran Forge Guard. They have voltaic hammers!

Then it’s on to another particularly juicy tidbit: Forces of Distinction. It’s good to see it back after its absence last month. There have been more rumors circling the web about this section. In particular the rumors I read about Wraith Witch Deneghra’s theme force all turned out to be quite true. She really can start the game with upkeeps in play on enemy models. She also makes one of Cryx’s least favorite units, the Cephalyx Drudges and Mind Slaver quite useful. Between their reduced point cost and the fact that they now have AD, you can expect to see a lot more of these guys. Kaya the Moonhunter is the other character with a new theme list. It’s pretty restrictive. While it will allow any non-character warbeasts, the only units allowed are Tharn and Shifting Stones. Additionally, Tharn solos and Druid Wilders are the only solos allowed. Still it gives some good benefits like Concealment for the Army, and Pathfinder/Treewalker for Battlegroup models. While Tier 3 gives Corpse Tokens to models with Heart eater, it also calls for three Tharn units to be taken. The fourth tier will let you take a free living light warbeast, but only if you already have four living warbeasts. While it’s quite possible to pull this tier off in games of 50 pts, it forces you to buy so much you might not want I’m not sure if it’s worth it – even if the free warbeast the tier 4 scores you could be worth as much as five free points. I think you’ll be better off sticking to her old tier where you have better choices to begin with and could still easily end up with three or more extra points to spare. The next article, Higher Command, gives new rules on High Command Team Formats. This is followed up by previews of all the cards in the next two High Command supplements.

In this issue’s battle report, Hell & Dawn, Issyria faces off against an Asphixious 3 force which includes a unit of the new Bane Riders. It’s cool to see these new Vengeance models in action.

Next up it’s another excerpt from Skull Island Expeditions. This time the focus is on Thagrosh from the new novel Mutagenesis.

The Iron Kingdom Archives is next. This segment gives newer players a chance to catch up on some important pre-MkII events. The whole year of 606 AR, including the completion of the Avatar and the Skorne invasion of Ternon Crag, are outlined here.

Then it’s time for a little Level 7 content: a bonus mission for Omega Protocol.

If that wasn’t enough IK content for you, Scoundrels and Sell-Swords has rules for another character NPC, Vayne di Brascio.

Races and Cultures gives us some more info about one of my favorite IK races: Gobbers.

As always, the last page goes to the Player Gallery where you’ll find the best entries from the Guns Ablaze challenge.

~ Hope you enjoyed the play by play. No Quarter no. 52 goes on sale January 22nd.

Author: Ben Williams
Ben Willimans is a Professional Painter and Columnist at Bell of Lost Souls. He has been involved in the hobby and art side of miniatures and the tabletop gaming industry for over 20 years. He has won multiple national painting awards.
Advertisement
High Command Iron Kingdoms Level 7 No Quarter Magazine Warmachine-Hordes
Advertisement