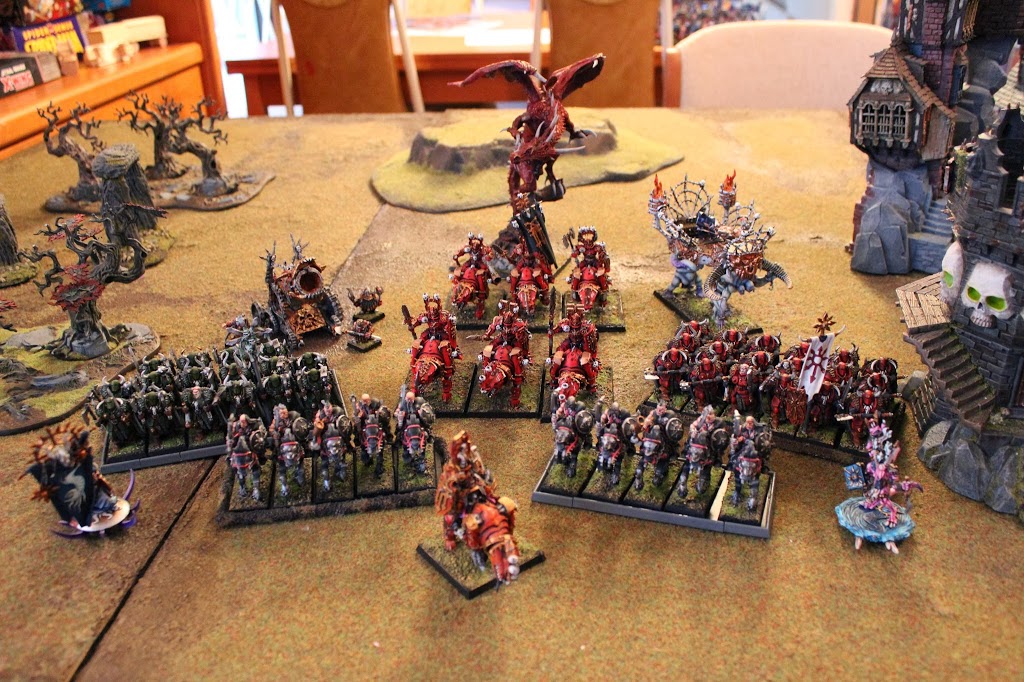 Have you ever faced off against Warriors with Empire and wished you had cannons instead of Halberdiers? That’s all part of choosing the best units for your army and for your play style.

The army featured in the picture at the top of this article is my husband’s Chaos Warriors army. It was a Christmas gift I got him one year and as I was trying to do it without him knowing I had to put a lot of thought into what units to choose and weapon combinations to give him. At the time I consulted with a variety of the local gamers who asked a bunch of questions that came down to one general question: what does he want to do with the list. The questions they asked are the same you have to ask yourself before you start building an army list and I always recommend you know what you want to play in a list before you start buying models. For me those answers were:
I put the question to Chumphammer and CHOP! and received the following responses:

Personally I start with a list that could be fun and then tweek it until its filthy. Look at my chaos. I started with an all Khorne list, no big things. Now I have a daemon prince and 3 chimeras. — Big Pat

Points efficiency. Does the unit acheive something you need it to and does it do it effectively for the points spent. –– Lil’ Pat

It’s all about the fluff — several members

I think it comes down to environment. In our environment if you take sub-par lists you get raped. — Scott

I pick units based on how they best counter Peter’s units and sometimes it means those units aren’t so good against Lil’ Pat’s units. But it’s important to not lose focus. Of course after what Lil’ Pat did to me I might have to swap the meta. — Chris

To summarize all that: what units you choose are contingent on your opinions and priorities so there really is not one best way to choose.

How Do You Know?

When you are choosing your units you must consider what kind of player you are: are you playing only to win, only to have fun, to follow the fluff or somewhere in between as a combination of those. From there you can then choose units that are as cut through or as fluffy as you want them to be.

In the army book there is a description of each unit type and their abilities, including a stat line that tells you how they should perform. No matter what your preference as a gamer I suggest you study each of those and use them to help you decide.
This is where I insert a tirade about being a Hobbiest, a Hobbier or a Gamer….
What Is a Hobbiest, Hobbier or Gamer?
Defining whether or not your are a hobbyist or a gamer is contingent on your perspective, your interest and your time. In fact, it was pointed out by Chumphammer host Dale Johnson that there’s really three options: hobbyists, hobbiers and gamers and defines them thus:

Hobbyist: Paints because he loves to, uses sub par choices [in his army] as he loves the models and fluff. Would rather both players have a great game and win if possible.

Hobbier: Paints because he wants good scores and a nice looking army. Takes optimal choices with a few fluff choices [in his army]. Wants to win, but wants both players to have fun and a full game.
Gamer: Pays other people to paint his army consisting of the best [tactical] choices possible. Is there to win in the shortest time possible so he can gloat over his victory. Has no feeling of remorse for destroying someones hobby.

I came to the conclusion after reading 14 pages of opinions that came about from my question that, at least in our meta, there is a general consensus that this definition is pretty accepted–they even went so far as to single out who fits in each category.

In my opinion Dale is right, there are three categories and:

I am a Hobbier, and Proud of it.

I like to think I am a Hobbier and that I could never be as cut throat as my definition of a Gamer–just check out my personal blog, you’ll see I am not lying. I mean just look at the way I build and play my armies.
If it you delve into the meat and potatoes of it (this is why I am a Hobbier) I brushed off taking stronger combos like Inner Circle Knights, War Alters, etc because they don’t look as cool as the Forgeworld models and I love the fluff from the Tamurkhan book.
My Choices
When I chose the units for my Marienburg Empire army that I am just getting started with I had to consider my criteria Because I didn’t want a cavalry heavy army again (Brets rely on Cav and I wanted something different) that meant looking at the infantry units. Empire armies have several infantry units, but it was a combination of their fluff, the stat line and the models themselves that made me decide to do a 60 man block of Halberdiers and because of the way the Forgeworld kits work I have also decided to use Swordsmen, though whether as detachments or individual units I have decided I want to keep them flexible to do either one, which means as simple a thing as making sure that I have a unit champion, musician and banner bearer painted up to use when I want them as their own units. I also chose to do two Landships which in games that do not allow the FW rules I will be able to substitute as Steam Tanks. Both landships and steam tanks are devastating on the table. Cannons because in my opinion an Empire army isn’t an Empire army without at least one cannon and probably a unit of Handgunners because I am planning to take the Forgeworld special charater that makes them better too. I also am planning to do a couple units of demi-gryphons because I have always loved the models and because they are a force to be reckoned with on the table.
It is Not Set in Stone! Once you buy your stuff and play it a few times it is not hard to buy more and change things out for other things. When I was talking to others about their suggestions I was told repeatedly I should take a Luminark and a War Alter, and I probably will add those down the line but I may change my mind after I have got a few games in.
I often found with my Bretonnians that using the same list every time gets boring so even though I typically ran several units of knights and a pair of trebs I could switch up and surprise people with a block of stubborn peasants too.
There is no right or wrong list, it is all about how you play the combos you take and if you don’t like them you can change them.
After you have chosen the units you want you can buy them a few at a time or you can splurge buy and get everything at once (I suggest that your parents/spouse/partner is less likely to throttle you if you break up your purchases), remember that most tournaments have a painting requirement. Check back next time for my Getting Started article all about painting.