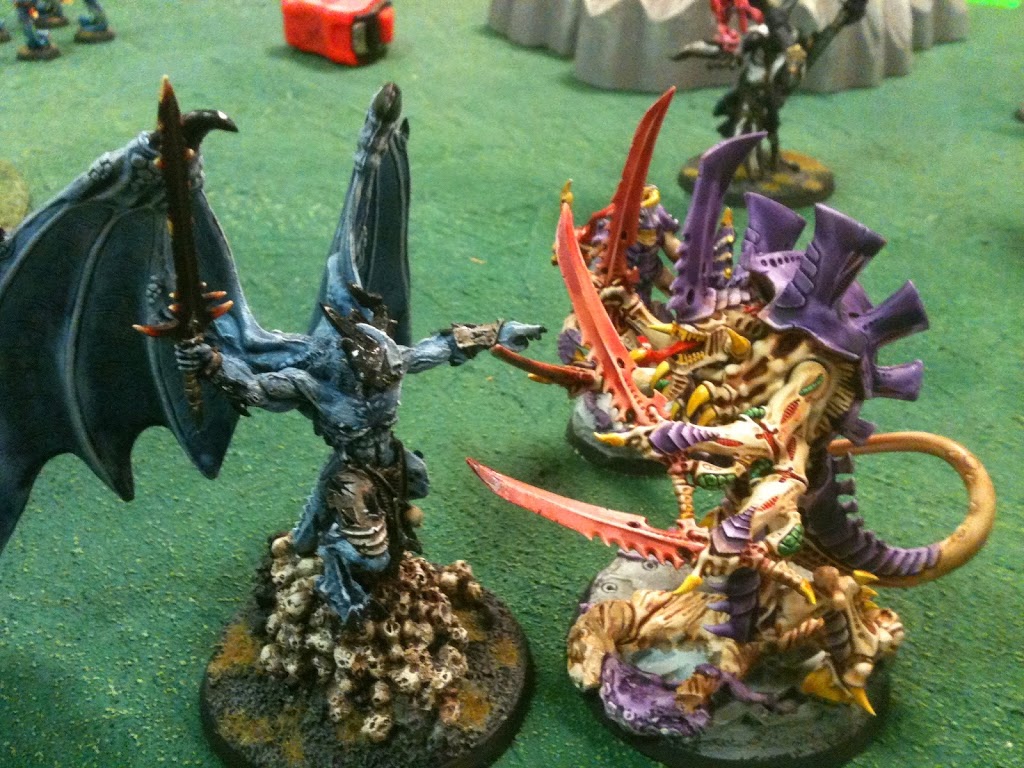 Fritz here…
I’ve got an idea on an all new way to think about HQ.  Let me explain…

I’ve been working my way through the Tyranid codex trying to build out a really scary HQ combo to run on the table, something to put the fear into my opponent and really get their attention, while trying to have some fun at the same time. I’m not sure what I’m going to be running just yet, but let me share with you the general formula that I like to use to try and sort through a codex’s options.

A good example of a passive HQ choice is Eldrad from the Eldar codex- he is there to join a unit and sling around some psychic powers to support that unit or parts of your Eldar warhost that are in his sphere of influence. Can he hold his own in the assault with some Eldar trickery? Perhaps, but he is hardly scary.

An active HQ choice example is Lysander from the Space Marine codex- with the hammer of Dorn he wants to get into the assault and start swinging away. Running up the table he will get your attention and there will be dues to pay if he can make it into the assault.

So which HQ choice is best?

I find more than anything in 40K, selecting an HQ comes down to play style and what you enjoy even if full competitive play is your only 40K filter.

Personally I enjoy a more active based HQ choice- visually it captures my imagination, narratively it adds to the game, IMHO, by hopefully having a climatic battle, and in terms of dishing out the damage and killing opposing models it is the way to go.

But how to run such a setup, especially since we all know there is more to it than just running across the table…

This is a VERY fine line to walk since you are going to need some sort of delivery system to get your HQ choice into the thick of the fighting, while at the same time taking those invested point and adding them on top of the point needed to run the HQ choice. In a 2K point game dropping 150+ points for an HQ choice is one thing, but dropping another 500+ to make it work requires some thought and balance.

Many players say expensive HQ choices don’t make up their points, and this is totally true if they die on the way in or take a few game turns to start removing opposing models- you will never “earn” those points back. I want turn one of movement and then I’m there…BAM…in your face!

First you are going to need speed and protection.

Second you are going to need wingmen for lack of a better term.

Speed depends on your codex, but moving 6” a turn isn’t going to cut it- hop in a Land Raider, some sort of flyer, get a steed, or grow some wings. Heck, maybe even deepstrike in if you have to. Same with protection as you ARE going to take shots on the way in- can you encase yourself in AV 14? Hide in a big squad of sorts, attach some models with wounds to take in your place?

Next are your wingmen- two or three models or groups of models who move alongside your HQ choice either running interference or adding a little assault power to tip things in your favor.

Let me build a good HQ choice combo and you will be hard pressed to kill it- but not slow it down by assaulting me with huge blob or tar pit units, or throwing your own hard hitting unit against it so my HQ unit destructs on it and now won’t go on killing for the rest of the game in any effect. These wingmen models are there to intercept tar pit or blocking units, or to add on some more wounds/attacks in the assault so my HQ doesn’t self-destruct.

Of course the ultimate challenge with this formula is adjusting the points of everything you need in balance with your game point limit, making sure you don’t skimp on scoring units and other mission essentials, as it is VERY easy to go point crazy with your avatar on the table.

Thoughts?
Which do you prefer in your lists – Active or Passive HQ?