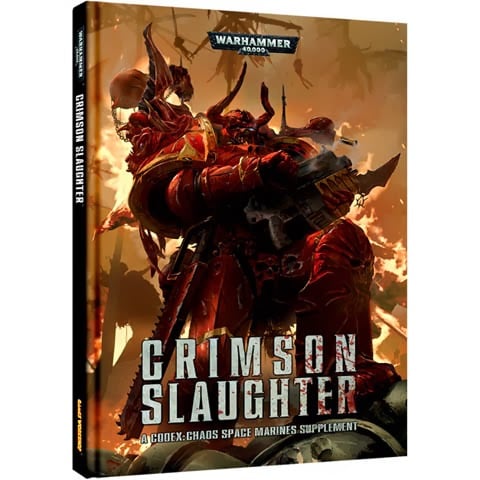 The Chaos Marine kits and Codex are on the shelves.  Go take a look and prepare your wallet for service to the Ruinous Powers! This plastic kit makes one Helbrute with a massive array of weapon combinations. The left arm can be equipped with a thunder hammer, power scourge, missile launcher or power fist. The right arm has the option to equip a power fist, twin-linked heavy bolter, twin-linked lascannon, reaper autocannon, multi-melta or plasma cannon.
Poseable at the waist and shoulders, this kit is packed with options for customisation. Your Helbrute can look in different directions with a choice of 6 ball jointed heads. There are also 3 sets of horns for the sarcophagus and 2 shoulder pads for the left arm. The power fists can be upgraded to include a combi-bolter or a heavy flamer and you can choose to power your Helbrutes’ weapons with pipes or blood tanks.

Once the loyal servants of the Imperium of Mankind, now the Crimson Slaughter leave only destruction and despair in their wake. Tainted by the genocidal purging of Umidia they are plagued by the voices of their victims. Only through butchery can they silence the voices that haunt them – but the whispers of the dead always return.
Within the 72 pages of this hardback, full-colour book you will find:
– The gore-splattered history of the Crimson Slaughter – a tragic tale of how a loyal Chapter was transformed into Warp-cursed, bloodthirsty renegades.
– Supplemental rules for building an unstoppable army of the merciless Crimson Slaughter.
– A showcase of Crimson Slaughter miniatures.
– A series of narrative missions that enable you to recreate some of the Crimson Slaughters bloody battles.
– Rules for unique relics, Warlord Traits and new stratagems that reflect the Crimson Slaughter’s favoured tactics.