40k Editorial: The Evil that is Army Composition 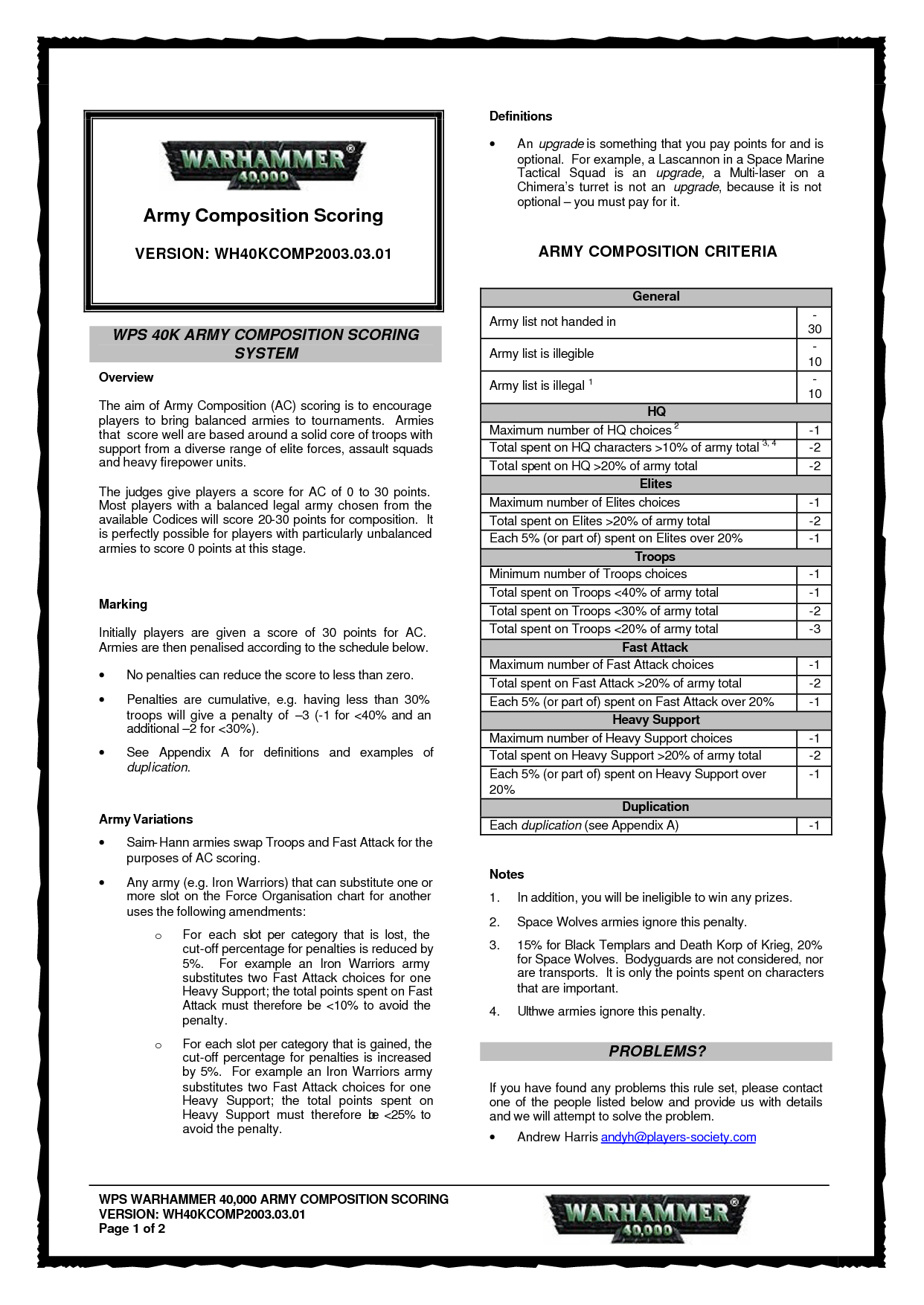 Sometimes the cure is worse than the disease.  Here’s what’s wrong with a lot of talk about how to “fix Warhammer 40,000:

Introduction
Around five or so years ago there began a movement on the internet claiming that all the major events in the US were nothing more than glorified hobby events—they were deemed not truly competitive and this really caught on fire in a huge way. Today there are lots of seriously competitive events all around the country and they are by far the most popular venues. I tip my hat to the NOVA Open for leading the way in this regard. Fast forward to now… I’ve seen a couple of Escalation events—very low attendance and most no one that attended seemed to enjoy them.

Change is the Only Constant
The pendulum is starting to swing back again now and there is a lot of talk on the Internet about bringing back army composition. Unfortunately enforcing army composition does not work as invariably it will always be coupled with a lot of personal bias and at the rate at which new rules are being released now it’s just not possible to come up with an overall fair system.

If you dig down into these discussions to re-introduce army composition you’ll find that there is a highly vocal minority, which is so often the case. I ask you to understand two things from my point of view as a veteran 40k player that still loves to play the game:

Campaigns versus Tournaments
That said above campaigns are a completely different animal of a different stripe. My true love right now is 30k and there are some awesome national campaigns you can attend such as TexasGamesCon if you’re willing to travel. You’ll find like a lot of like minded people and it’s much more fun than a GT. Of course 30k is not for everyone though and I respect that sentiment totally. I’d much rather spend my time and money to play in a big 30k campaign because of the friendly nature of these events as opposed to the possibility of facing off against a totally WAAC TFG at a GT. A 30k campaign is not competitive like a tournament… But yes it’s actually still competitive, which is human nature because deep down inside everyone would like to win, but a campaign is not all about the win and that makes the difference.

Only one person can come out on top at a competitive GT out of as many as 256 players. 30k campaigns are much fewer in number so you’ll have to look far and wide to find them – it’s worth the time and effort though if this is your bag.

Allies
Allies have been around for a long time. The infamous IG leaf blower list heavily relied upon taking a Daemon Hunter Inquisitor. My Blood Angels army that reached the Ard Boyz finals a few years ago featured allied Grey Knights and Sisters of Battle – no one complained back then either. I had three sources too,

Why I Hate on Army Composition
I used to attend a local GT that employed a totally secret system for army composition… Yes their system was completely non disclosed to the public and if they didn’t like you for any reason you had absolutely no chance to win. The TOs played Warhammer Fantasy and had no real clue about 40k which they often referred to as the 40Gehy. Their missions were simply atrocious—for example one year you could stack all of your objective markers on top of each other and castle around them. Finally I wised up and stopped attending. The following year this particular GT went belly up due to the negative feedback and has been replaced by another GT that embraces a purely competitive format. Do we really want this kind of thing to come back ? Not I.

I have a good friend whom played in a Swedish GT one year not too long ago. Sweden has one of the most restrictive formats in the world… Even the ETC cringes – wow wow wow ! This is their culture though and I feel sorry for people that have no real alternative and must play there… They have no real choice in the matter since they are all brain washed from day one. My friend was able to win by doing some serious research, crafting a list that took advantage of their silly comp rules… Any system can and will be broken. The TOs were completely blind sided and caught with their proverbial pants down.

The point being is any set of rules for army composition that are set forth in the public domain can and will be abused. The goal posts are simply moved to one side so WAAC players can react accordingly—This is how hyper competitive players operate. This in and of itself defeats the main purpose for imposing army composition. The Future (You read it here first!)
I have been told by several highly reliable sources that some major changes are coming down the line soon from none other than GW… Expect to see a new edition released within the next three months. The ally system will be drastically curbed along with psychic powers… Basically say good bye to all the present meta busting allied deathstars—As an example of what’s in store an ability (i.e., USR) from a parent unit will no longer transfer over to any allied independent character that joins them. So say goodbye to the Baron joining an Eldar Seer Council FTW… He will no longer benefit from a Farseer or Warlock casting Fortune or Forewarning. Another example is a Wolf Lord joining a White Scars command squad… No more scouting up or outflanking. This in and of itself will solve lots of problems generally perceived by many as to what’s presently ruining the game. I’d rather see GW fix the game rather a whole host of various house rules imposed by different TOs across the country.

Another good solution is to run two events in parallel such as the upcoming TexasGamesCon. They will run one unrestricted event in parallel with another restricted event, so you’ve got a choice now. It’ll be very interesting to see how it all pans out over the next year.

In Closing
Army composition does not work. The vast majority of the player base abhors Escalation which was poorly contrived to say the least. Truly competitive events are the least biased. Campaigns are an excellent alternative if you must not absolutely win. Some big changes to how we play the game are just around the corner.

I’m looking forward to it and feel optimistic.  How about you? 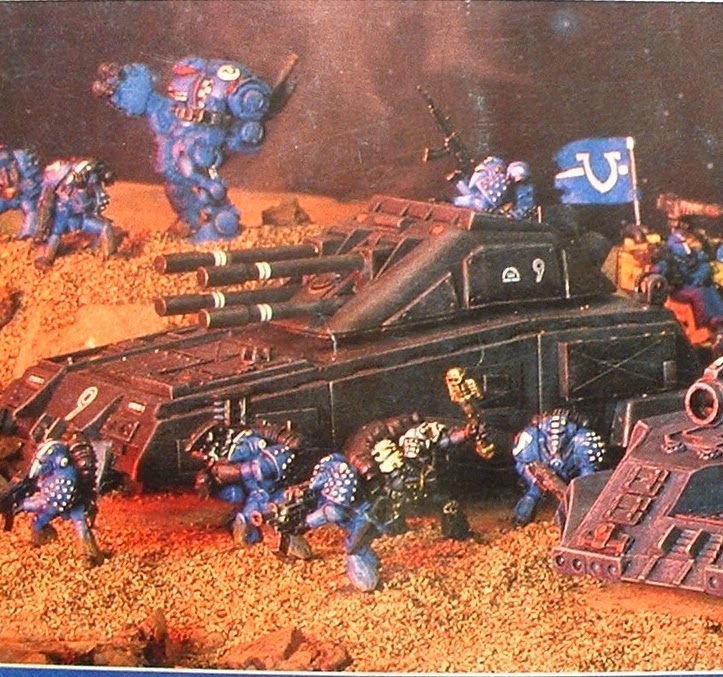