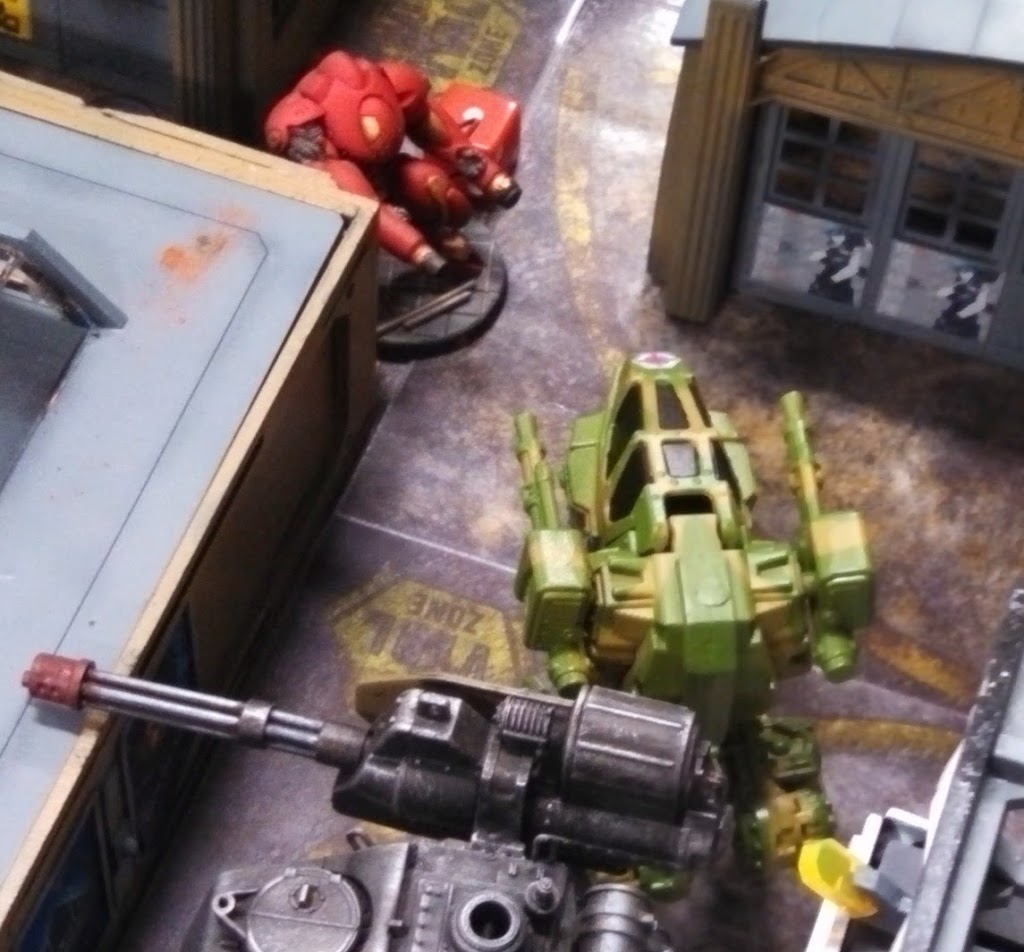 Anyone who has read the sections between the Infinity rule books knows just how rich the story behind the world is.  The conclusion of our dynamic story driven event.  Part 3 of a 3 part article.

WARNING: This is what actually happened.  If you intend on running this event, you should hide this article from your potential players.  I’m presenting everything here because I’m hoping it inspires more people to build their own story driven events.
Cast List Reminder

The players and their armies:

Since all players could now use their 300 point lists, we now moved all players to the “Find the Nomad” mission.  Details of that mission can be found here. In Turn 2, Geoffrey’s Steel Phalanx had a difficult time dealing with Ian’s Ariadna.  Ian ended up with 3 of the 4 crates.  Unfortunately for Ian, the odds were against him as Geoffrey found the tech coffin that happened to have Dire Foe Lupe Balboa trapped inside. On the other side of the planet, Bill’s Nomads confronted Scott’s PanO forces.  In this scenario Scott found Max Scorpio in the rubble that dropped from orbit.  And last but not least Mathieu’s Combined Army beat Russ’s Nomad force in finding the Nomad Algucil Hacker. There were two additional optional mission that would open at this point if any of the cases were not found or if there was a board that was unable to hack into the console to bring down the tech coffins.  I can’t give too many details of this since I am intending on incorporating some of this into my next story driven event.  One thing I can reveal is that there was also a chance that if a board was able to bring the coffins to earth, but neither player had the box with the person in it, that the orbiting survivor would be contaminated by the planet’s red goo.  Effectively, they would have been another sub-boss that they players would have had to fight.

Lupe Balboa’s tech coffin was lifted and she was brought back from cryo-sleep.  Realizing she was still on the planet’s surface, she flew into a rage.  Evidently, the Nomad advance team realized too late that the planet was alive and it was a trap.  The Tohaa base was the remnants of a Tohaa military space vessel that crashed onto the planet surface.  The Tohaa had not been on this planet for over 50 years and they had been duped into arriving to help some other race of creatures.  The earlier settlers could not be identified since their base had been nearly consumed into the planet.  The red fluid that oozed up from the ground was a series of microbes that allowed the planet to hijack technology while consuming it.   As the planet feeds it puts itself back into a state of hibernation and the planet’s surface will eventually reform.  Until the planet is done feeding, it will continue to become even more hazardous.

Three long stretches of red ooze fire into the air.  This planet sized Venus Flytrap now had control of the players’ starships and started to merge them into one meal for the planet to eventually consume.  A Lifepod rocketed up through the cloud cover.   Moving forward, the players only had access to their 100 point lists (augmented by any models they found in the previous turn).  Two missions emerged:

The missions were complicated by the fact that the planet was constantly becoming more poisonous.  The players were given 2.5 hours to resolve both missions or the planet would consume them.  The missions were conducted concurrently, but game turns were not in synch.  Each Game turn on planet’s surface signaled the starship to drop a bomb that would either hit the players below or accelerate destruction of the planet’s surface and accelerate the hazardous conditions of the planet.
It took Russ and Scott three planet turns (5 turns for them) to auto destruct the merged starship.  The mission required the team to activate three panels.  The activation triggered a turret to come out of the floor, wall, or ceiling and fire on the user hacking the console.  Moving forward the turrets would only act in ARO.  Complicating this task was a TAG armed with two spitfires moved 2-2, 3 structure points, armor 4, BTS -6, with a ballistic skill of 12, cc of 15.  He was hidden deployed near the console closest to the escape pod.  Once revealed, he would not have any form of camo/o.d.d. benefit.  After completing their mission Russ and Scott would be able to join the team on the surface (escaping the self-destruction sequence). On the planet’s surface, conditions had become worse.  20s rolled were an auto wound, 19s became strength 13 (bts savable) wounds.  In that time frame, the teams below had awoken the super TAG, and hacked into a console that gave them an overview map of the facility.  This successful hacking let them know what generators were used to power the elevator for the escape pods and which ones were used for installation defenses.  While progress had been made, the war with both the TAG and environment had started to take it’s toll on the units on the planet’s surface.  The two separate groups were allowed to activate one unit each at the same time in a coordinated fashion.  The arrival of Scott’s and Russ’s units created a third group, so three units could activate simultaneously. With the sole survivor throwing himself into space in hopes that he might come across a merchant vessel in that area of the galaxy, I explained how the living world made it’s way between the stars to feed.  Fifty years later, the planet resurfaces.  A faint Nomad distress signal convinces a handful of starships to find their way back into feeding range of the planet.


I hope you enjoyed the conclusion of the story and that it might inspire you to take some story driven chances with your group.  If I wrote another article about these kinds of events, would you as an audience member want to know more about how it was designed or to jump strictly into the story itself.  As always, you can post comments here, but I encourage you to subscribe and leave comments on my YouTube videos as well.  It’s been a really late start, but YouTube videos will return in April.