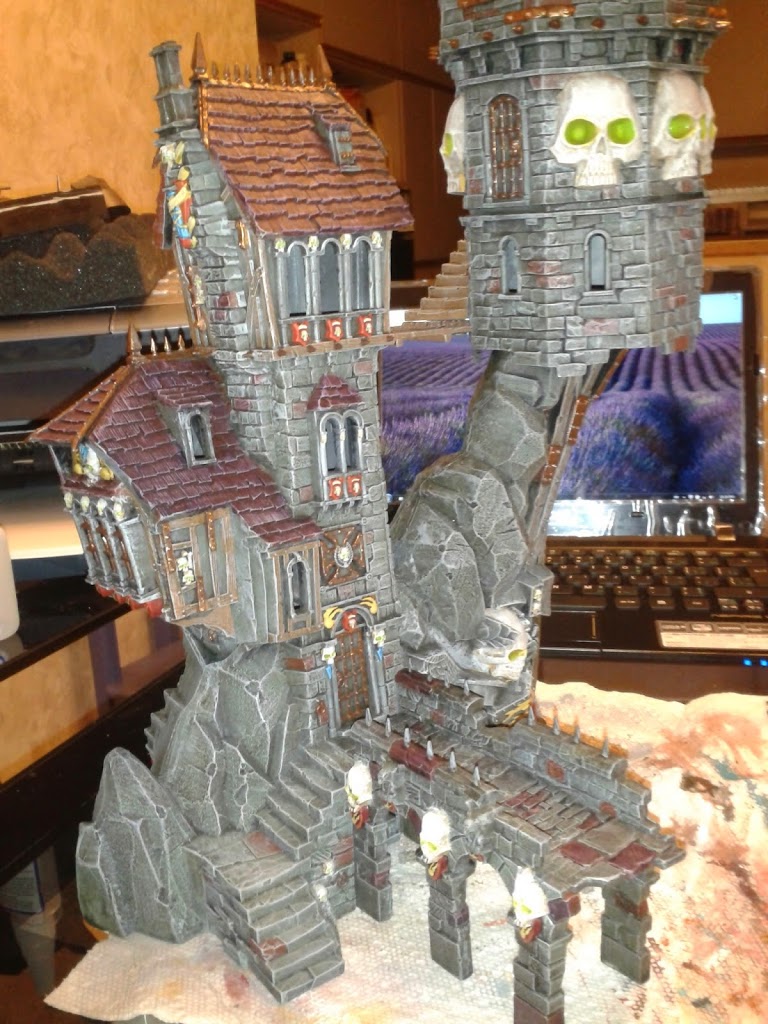 If you have been in the hobby a while you may already have a collection of terrain pieces, but if you are new to the hobby you might be wondering just what to use as a play space and terrain.  Here are some thoughts.
I talked a bit about this last year in my blog article Importance of a Well Dressed Table, but there’s still some other things to be said, and some misconceptions to be addressed. Even after I wrote my article last fall I still haven’t been setting up terrain properly, falling back into the rut from older editions of Fantasy where you placed X number of pieces of terrain based on the size of the table which usually wound up being between 5 and 8 pieces.

Battlefields can be a big problem in Fantasy: you might hear complaints that “it would have been different if that forest was not there” or “my army died because I had to deal with a Blood Forest” or any number of complaints. At home I find we complain less about the terrain, but at tournaments you hear a lot more of complaints because the terrain affected the game play on Table 1 differently than the terrain on Table 6 did (I’m an advocate of similar terrain for tables in tournaments).
Grab your 8th Edition Fantasy rulebook because you are about to go on a tour!
Setting up the Battlefield (page x-xi)
According to the rulebook “…the first step to playing a game of Warhammer is setting up the battlefield.”
Well you can’t set a battlefield without having a play space.
What can you use as a Play Space?
·         Hobby shops usually have a dedicated table or two for people to play games on: sometimes they are sculpted, sometimes not.
·         MDF – At home we put 3 flat pieces of 2×4 MDF over my dining room table to make a 4×6 play space. If I don’t want to use my dining room table I have now bought a folding 2×6 table (you can get them at most big box retailers-I got mine at Home Depot) that I have been using to put my MDF on to make a play space. MDF is relatively inexpensive (I think we paid $4/2×4 sheet). MDF is smaller to store than sheets of plywood (they can be slid under a bed or couch in many cases)
·         The floor – If you don’t have MDF or plywood or a table space big enough to support it you can always tape off a section of floor. I suggest using Painters tape for easy removal when you’re done.
Once I have a play space I can set the Battlefield.
Battlefield Terrain (page 116-131)
In this section of the rulebook you can read rules and definitions for terrain types which are of great help when you flip to page 142 to determine the actual terrain you’re going to use in your game.
There are several types of terrain:
·         Open Ground – anything that does not affect the game (ie fields, desert)
·         Impassable – areas where warriors cannot enter without likely chances of death (ie lava fields, chasms)
·         Mysterious – terrain pieces that look normal but hide special abilities (ie forests, buildings, rivers, etc)
·         Dangerous – treacherous but not necessarily deadly
Within each of these types of terrain there are more specific kinds of terrain which may cross between types:

·         Hills – Some are mysterious, some are dangerous, and some have impassable sections. In my experience Hills tend to be  treated as open ground with perhaps one side as “impassable” if it is obviously a sheer cliff face or dangerous if it has a lot of debris or ruins on it. (page 118) They often give advantages to artillery.
·         Forests – While it is usually pretty obvious what represents a forest in a play space sometimes a single tree may not represent a forest. Forests are typically handled as Mysterious Terrain providing benefits or challenges to the game (page 119)
·         Rivers – Rivers are also typically handled as Mysterious Terrain (page 120)
·         Marshland – Muddy, part water, part solid ground, they can be tricky to manuover and are often deadly. (page 121)
·         Obstacles – Most often Fences, Walls and Barricades. Obstacles can be a fire vent or a crumbling wall.  (page 122-123). They often affect movement and provide cover for troops.
·         Mystical Monuments – Idols, Altars, Ruins, Pits, Waytones, Portalls and more could contain mystical power. They are typically impassable. (page 124-125)
·         Building – Towers, houses, chapels and more buildings have several pages worth of rules to address how they are used. (page 126-129)
·         Arcane Architecture – these are a type of building with magical prominence (page 130-131)
What can you Use as Terrain? Personally, and as a result of both gaming at home and running tournaments, I have accumulated quite a bit of terrain. You don’t have to use the GW kits, you can use everyday things too:
·         Mixing bowls or cereal bowls as hills
·         Stacks of books or movies as buildings
·         Fish bowl decorations as obstacles or buildings or
·         Lego or other building blocks to make buildings or obstacles
·         A piece of cardboard as a marsh
·         A sock as a river
It doesn’t have to be pretty to give you a place to play.
If you have the time, money or inclination there are a lot of kits out there that you can build or you can make your own as well.
·         GW has lots of terrain kits that can be build and painted
·         Gale Force 9has the Battle Field in a Box kits
·         Private sellers–Rob Metzner at Tabletop Scenery in Vancouver makes and sells terrain, there are other sellers who do as well
·         Kickstarter—there’s been quite a few terrain companies pop up on Kickstarter
Making your own can prove challenging but it can also be fun. You can find patterns for things and idea suggestions all over forums and people’s blogs, they use everything from Pringles’ chip cans to cardboard boxes. We are currently making a jungle theme set for something different compared to all our buildings.
Now you have your Terrain sorted let’s get it on the table!
Flip to page 142 – The Battlefield.

Now that you have Set the Table you’re ready for the next part: Choosing a Scenario. Check back with me next week for Time to Play Part 4.

40K: The Ultra-Exclusive Ultra Arrives and the Era of the Collector 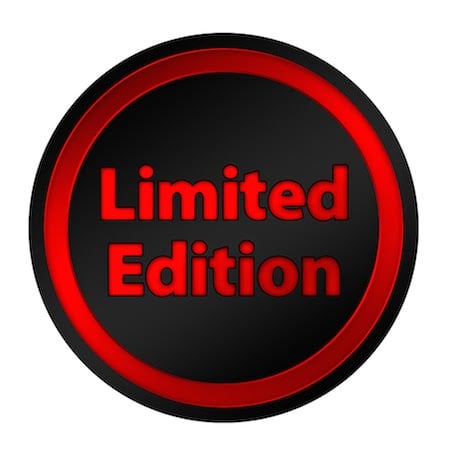